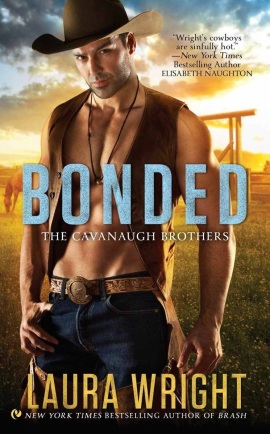 Ranch hand Blue Perez’s once simple life is spinning out of control. He’s discovered he has three half-brothers, and they’re not ready to accept his claim on the ranch. Also, Blue’s girlfriend may have betrayed him in the worst way possible. And after one evening of drowning his sorrows at the bar, there’s someone he can’t get out of his mind, a woman who says she’s carrying his child.

Following a night of breathtaking passion in the arms of a man who now rules her dreams, waitress Emily Shiver is contemplating her next step. Blue is determined to be a part of her life, yet she would rather raise the baby on her own. But when she becomes the target of someone’s dark obsession, Emily must let Blue in—to both her heart and her future.

I love this series so much and this fourth and final book in Laura Wright’s Cavanaugh Brothers series answers all the questions involving the murder of the Cavanaugh brothers’ sister. Bonded is a story of intrigue, loss and love. I loved every minute of it and fell even more in love with Blue. He struggles to work through all the pain he’s going through and at times I wanted to shake him but he overcomes everything that’s been thrown at him. The chemistry and romance between Blue and Emily was hot and I enjoyed their interactions. If you’ve been reading this series from the beginning you’ll enjoy the conclusion and if you’re haven’t read them yet you should start at the beginning because there is a mystery that spans the series. I highly recommend this sizzling cowboy series. 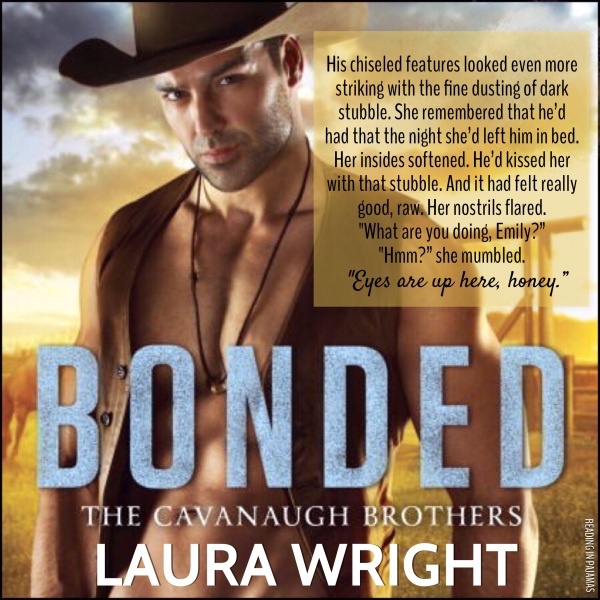 “I want you to know,” he began. “I’m here for you and this baby.”
Her eyes widened, but she didn’t say anything.
“Things started how they did,” he continued, “and that can’t be changed. Hell, wouldn’t want it changed. But like I said last night, I want to be around.”
“I know, Blue.”
What was that? he wondered. In her eyes? Sadness? Worry? He was trying like hell to alleviate some of that. “Not just a few hours here and there either.” His gaze dropped, momentarily settling on her flat stomach. “I want to see it grow. I want to feel it move.”
She released a breath. Weighty. And a sudden softness touched her expression. “I would like that, Blue.”
A bit of her hair had escaped her braid and was sort of covering one eye. She looked so damn beautiful. Without thinking, he reached up and tucked the strand behind her ear, then let his fingers drift down her cheekbone. She had the softest skin.
Her breath caught and she leaned into his touch.
His eyes searched hers. “What? What’s wrong?”
“How do we do this? You? Me? The baby?”
His nostrils flared and his chest expanded. “We’ll figure it out.”
She didn’t say anything.
“Yeah?” he prodded. He needed to know she believed him.
She nodded, her cheeks going pink again. He couldn’t help himself. He ran his thumb over that cheek once again. Oh, yeah. Softest goddamned skin on the planet. Christ, he wanted to kiss her. Just a taste. The bottom lip . . . that full one . . . just one taste; then you let her go. Without thinking too hard on it, he leaned in. Right away, she closed her eyes. Parted her lips. Pink and full, and so ready. Blue stared at her mouth. Seconds ticked by. What was wrong with him? The breeze off the meadow came rushing into the barn. The Triple C’s barn. Shit, what was happening to him? His entire body humming with a need he hadn’t felt since that night . . . that night they’d created the life inside Emily.
Overtaken with far too many emotions he refused to deal with – not now anyway – Blue eased back, releasing her.
Instantly, Emily opened her eyes. And when she realized what had happened—and what hadn’t—she turned bright red.
Blue’s chest tightened. He was such an ass. He wanted to kiss her. Like a drowning man wanted air. And she’d wanted him too. So what was he doing pulling back?
She moved away from him. “I should go.” Her voice was slightly breathless.

New York Times and USA Today Bestselling Author, Laura Wright is passionate about romantic fiction. Though she has spent most of her life immersed in acting, singing and competitive ballroom dancing, when she found the world of writing and books and endless cups of coffee she knew she was home. Laura is the author of the bestselling Mark of the Vampire series and the USA Today bestselling series, Bayou Heat, which she co-authors with Alexandra Ivy.

Laura lives in Los Angeles with her husband, two young children, and a menagerie of pets.