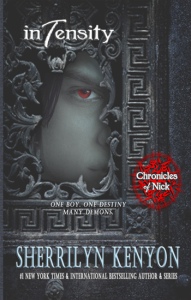 It’s a demon-eat-demon world for Nick Gautier. Just when he thinks he’s finally gotten a handle on how not to take over the world and destroy it, Death returns with an all-star cast that is determined to end the Malachai reign and lineage forever. Worse? Death and War have found the one, true enemy Nick can’t find, and even if he did, it’s one he could never bring himself to banish or kill.

Now framed for murders he hasn’t committed, and surrounded by new friends who might be turncoats, Nick is learning fast how his father went down in flames.

The heat in New Orleans is rising fast, and Nick’s threat-level has gone into a whole new level of intensity. He’s learning fast that when War and Death decide to battle, they don’t take prisoners. They don’t negotiate. And they’re both immune to his biting sarcasm and Cajun charm. To win this, he will have to embrace a new set of powers, but one wrong step, and he will belong to the side of Darkness, forever.

*Review copy provided by Netgalley in exchange for an honest review. 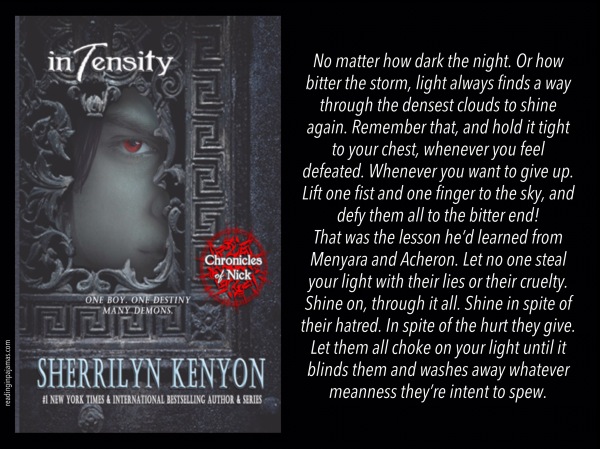 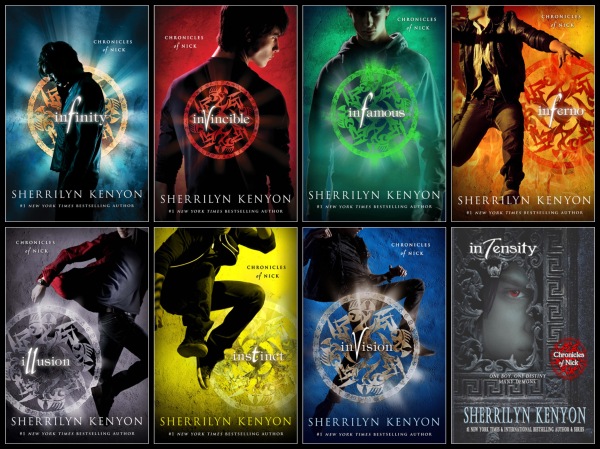 The world of the Dark-Hunters® is unlike anything you’ve every seen before. It’s dark. It’s gritty. It’s dangerous…

And it’s a whole lot of unexpected action and snarky comebacks.

My name is Cyprian Malachai and I should have never been born. I know it. My mother knows it and most of all, my father, the Ambrose Malachai is more than aware of it. Every creature under the sun is out to end me.

But I don’t go down easy. Anyone who’s ever fought a Malachai knows that fact.

He hasn’t. Our war is only on an interlude. It’s about to heat up and I have a massive grudge to settle. One that is far from over . . .

**Please note that Shadows of Fire is a four book continuation of the Chronicles of Nick®, and is a Young Adult spin-off series from the Dark-Hunter® novels. If you’d like to read the ones with more adult content, they are listed under the Dark-Hunter series section.
The manga listed is for ages 14 and up.

The Chronicles of Nick *is* Nick’s real and true past. There is a huge surprise (several actually) in the series that I don’t want to spoil, but when you read them, everything you think is an inconsistency will make perfect sense to you. More than that, you will understand exactly why Nick is the way he is and why he continues to hate Acheron the way he does.

Remember the one promise that I try to keep in every book: Just when you think you know the truth about a character or event, you find out that things are seldom what they seem. Nick is one of those characters. There’s a lot more to our little Cajun than what you’ve seen to date.

Remember the one promise that I try to keep in every book: Just when you think you know the truth about a character or event, you find out that things are seldom what they seem. Nick is one of those characters. There’s a lot more to our little Cajun than what you’ve seen to date.

There are many, many secrets you’ll learn about a lot of characters, including Cherise and especially Jaden and Jared. Just hold on… you ain’t seen nothing yet 🙂
There are 8 books in the Nick Chronicles.

There are 4 books in the Shadows of Fire series:

Then there will have a separate trilogy of adult books to finish off the story arc.

*Interview was originally posted June 20, 2014  with our “Born of Fury” review. It includes some info about “Son of No One.”

BOOK DESCRIPTION:
16 year old Jesse tries to survive a post-apocalyptic New York City.
At the end of the world, it’s hard to trust anyone–even yourself.
Jesse and a ragged band of survivors crawl through the wreckage of New York City. They escaped the Chasers–for now. But the infected zombie freaks are getting bolder, stronger. So when they begin to see signs of human life, they can’t believe their luck. Now they’re the chasers, looking for someone to tell them the worst vacation ever is over. Of course, luck can be good and bad. And the enemy could be closer than your reflection in the mirror. . .

REVIEW:
This book pulls you into the mind of a 16 year old boy trying to survive the aftermath of horrible destruction. To make matters worse, the chemicals have turned people into crazed ‘zombiesque’ hunters. While being chased, he is looking for others like him….normal. When he does find other stragglers, you feel their uncertainty, fear, hope and longing for companionship. Each has a different background and personality but now have something in common and they desperately hang onto that thread and struggle to determine the best course of action.
This story pulled me in and won’t let go. I can not wait until book 3 so I can stop worrying about them. Great read.

*Review copy was received from the publisher in exchange for an honest review.

“With every fiber of my being, I yearned to be normal. To glide through my days at Iverson without incident. But I’d have to face the fact that my life was about to unfold in a very, very different way than I’d ever envisioned. Normal would become forever out of reach.”

Lora Jones has always known that she’s different. On the outside, she appears to be an ordinary sixteen-year-old girl. Yet Lora’s been keeping a heartful of secrets: She hears songs that no one else can hear, dreams vividly of smoke and flight, and lives with a mysterious voice inside her that insists she’s far more than what she seems.

England, 1915. Raised in an orphanage in a rough corner of London, Lora quickly learns to hide her unique abilities and avoid attention. Then, much to her surprise, she is selected as the new charity student at Iverson, an elite boarding school on England’s southern coast. Iverson’s eerie, gothic castle is like nothing Lora has ever seen. And the two boys she meets there will open her eyes and forever change her destiny.

Jesse is the school’s groundskeeper—a beautiful boy who recognizes Lora for who and what she truly is. Armand is a darkly handsome and arrogant aristocrat who harbors a few closely guarded secrets of his own. Both hold the answers to her past. One is the key to her future. And both will aim to win her heart. As danger descends upon Iverson, Lora must harness the powers she’s only just begun to understand, or else lose everything she dearly loves.

REVIEW:
In one word, beautiful! The writing and language were beautiful. The story was beautiful. I’ve never read a book with such beautiful and breathtaking writing. I’m using beautiful a lot, but it is really the only way to describe this book! It took me a while after I read this book, to write this review because I didn’t think beautiful was sufficient in describing the story Shana Abe created. She transported the reader into Lora’s life.

I enjoyed all the characters in the book and their interactions with each other. I love dragons and this book is a great depiction of dragon shifters. Great fantasy book! I highly recommend this book and can not wait for the next one!

“Those nights, in the sweetest dark, we shared our dreams.”

*Review copy received in exchange for an honest review.