Vengeance and revenge are the only forces driving vampire soldier Noah Siosal since losing his brother to an enemy he’s been unable to find. He’s searched every corner of the globe, going through adversaries and piling up bodies until finally getting a lead. The last place he wants to be is in a ridiculous anger management group with people expressing feelings instead of taking action. Until one fragile human, a green-eyed sweetheart being stalked by danger, catches his eye. One touch, and he realizes vengeance can’t be anywhere near her.

Anger and self-preservation are the only motivations Abby Miller needs or wants right now. Falsely accused of attacking the man who’s terrorized her for years, she’s forced as a plea bargain to attend an anger management counseling group with people with some serious rage issues, while learning true self defense on the side. Yet a man, one more primal than any she’s ever met, draws her in a way and into a world deadlier than she’s ever imagined. He offers her protection, but she finds the fight is really for his heart, and she’s ready to battle.

I loved this novella! Noah and Abby were perfect for each other and their story was a great mix of danger and  suspense with a romantic love story that steamed up the pages. VENGEANCE is part of the Dark Protectors/ Rebels Series, but it can be read as a standalone. If you haven’t read any of the books you can pick this one up and try out the series. I highly recommend the entire series. The Dark Protectors Series is one of my favorite paranormal romance series I read over and over again.

His hand slid around her face and tangled in her hair, tilting her head back farther.
She sighed and kissed him, warming right up. Her eyelids opened to see his intense gaze on her. She jerked, her body stilling.
Holding her gaze, he lifted lightly, his lips barely a whisper from hers. “You okay?”
She nodded, even though his hand in her hair contained her movement. “Yes. You?”
“Yes. You want more?” He held himself still, like one of those racehorses in a stall right before the gate opened.
Her nipples peaked. Fast and hard. More? There was more? She should think. Take a step back. “Yes,” she said. “More.”
He moved faster than humanly possible, ducking his head and claiming her lips. This time, there was no gentleness or coaxing. It was all fire and electricity and demand. Hard and fast, he took her mouth, kissing her in a way that took her completely out of the moment.
The rain and cold disappeared along with her fear and sadness. Only passion and fire remained. She let him guide her, opening her mouth, wanting everything he was giving. Never had she felt this. Her body went from a slow heat to a full-on inferno, her thighs trembling for more of him. For all of him.
Headlights barely caught her attention. Then a door slamming. “What the hell?” bellowed a familiar male voice.
She jumped, fear instantly swamping her. “No.”
Noah released her and turned as Monte stomped toward them, fury morphing into red blotches on a face she’d once thought handsome. “What are you doing?” he yelled, arms swinging, getting too close.
Noah partially turned and punched him right in the mouth. Monte went down, splashing through a mudpuddle, his arms windmilling.
Abby gasped, her body chilling instantly. Horror caught her. Oh God. “What have you done?” 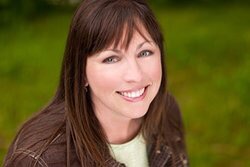 Rebecca Zanetti is the author of over twenty-five romantic suspense, dark paranormal, and contemporary romances, and her books have appeared multiple times on the New York Times, USA Today, and Amazon bestseller lists. She has received a Publisher’s Weekly Starred Review for Wicked Edge, Romantic Times Reviewer Choice Nominations for Forgotten Sins and Sweet Revenge, and RT Top Picks for several of her novels. She lives in the wilds of the Pacific Northwest with her own alpha hero, two kids, a couple of dogs, a crazy cat…and a huge extended family. She believes strongly in luck, karma, and working her butt off…and she thinks one of the best things about being an author, unlike the lawyer she used to be, is that she can let the crazy out.