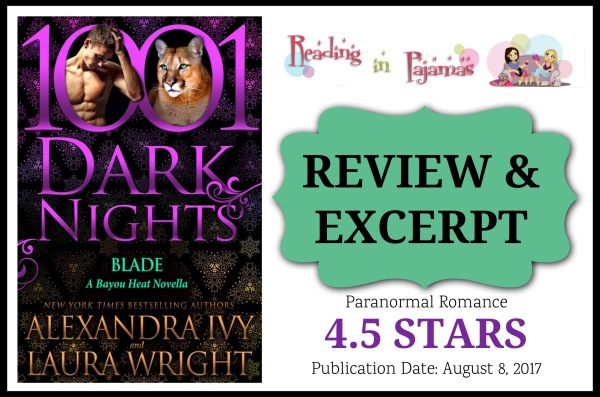 Sexy Suit, Blade was held captive and abused for decades. Benson Enterprises was desperate to use his superior blood to create super soldiers. But when he’s finally rescued, he can’t return to the Wildlands with the other prisoners. Not without the female he was forced to watch being impregnated. The female who has gone missing.

Beautiful and broken, Valli just wants to run away and never look back. But with the shocking news of her pregnancy fresh in her mind, she wonders if that’s even possible. Told by her captors that one of the caged animals assaulted her, she knows she must do everything in her power to keep her unborn child safe. But when a glorious male tracks her down and claims her and her baby as his own, will she have the strength to walk away?

Walking out of the kitchen with careful steps, Valli wondered if Fran suspected she wasn’t feeling well. Again. If so, the older woman would insist that she go upstairs to bed. It was such a temptation, but it would not only leave Fran alone to deal with both cooking and waiting tables—it would be a reminder of the last time she’d been unwell. And she couldn’t risk losing her job, even if Fran let her stay upstairs while she hired out again. She had to push through.
Once out of the kitchen, she scurried down the short hallway that led to the women’s bathroom. Crossing to the sink, she splashed cold water on her face, taking deep breaths.
After a moment or two the dizziness receded but was replaced by a strange sense of euphoria. As if something, or someone, was filling her with pure joy.
Unnerved by the sensation, Valli rushed out of the bathroom, only to slam into a man who was just entering the hallway.
Dr. Scott Richards reached out to grasp her by the shoulders, preventing her from bouncing away like a pinball.
“Valli, are you okay?” he asked in concern.
She instantly pulled away from his touch. It wasn’t personal. The doctor was young and boy-next-door handsome, with his dark blond hair and bright blue eyes. He even had dimples. But since her return from the clinic she didn’t want anyone touching her. Especially not men.
She forced a smile to her lips. “Sorry, Dr. Richards.”
He clicked his tongue. “How many times do I need to tell you to call me Scott? Dr. Richards was my dad.”
She took another step backward. Since her arrival in Bonne, she sensed that Scott wanted more from her than just a doctor/patient relationship.
“Scott,” she reluctantly offered.
“That’s better.” He flashed his dimples. “Now why don’t you join me for a cup of coffee? You look like you could use some caffeine.”
“I’m fine.”
He frowned. “You’re pale.”
“I’m working a double shift, so it’s been a long day.”
“Hmm.” His gaze studied the shadows she knew marred the skin beneath her eyes before lowering to her loose smock. Did he suspect there was something she was trying to hide? Or was he just surprised in her choice of uniform? “I think you need to come in for a checkup.”
A flush of anxiety moved through Valli at his words. She pressed herself against the wall and began to inch her way toward the back door that served as an emergency exit.
She liked this man. She really did. But there was no way in hell she was allowing him to examine her. No way in hell she was letting him even get close enough to try.
“I told you when I returned to town that I was cured.”

BLADE is my new favorite in the Bayou Heat series. It had all the danger, suspense and hot romance that I’ve come to expect with the series, but this one also had a really sweet love story. Blade and Valli both survived hell and when they come together it heals both of them. I just really enjoyed this one. I’d recommend reading this series in order, but each novella can be read as a standalone. They’re novellas but they feel like complete stories. I love Alexandra Ivy and Laura Wright’s books and they make a great team when they write together. I highly recommend this series for paranormal romance lovers.

*Review copy provided by InkslingerPR in exchange for an honest review.

Alexandra Ivy is a New York Times and USA Today bestselling author. From Alexandra: “I’m not exactly sure when I fell in love with books. Probably on my mother’s knee listening to her read Dr. Seuss to me. I do remember that I was barely old enough to cross the street by myself when I discovered the delights of the local library.

Could anything be more wonderful than spending summer days surrounded by stacks of Nancy Drew mysteries? Over the years I fell in love with Victoria Holt, Jane Austen, Agatha Christie, and J.R.R. Tolkien just to name a few. I read poetry, essays, biographies, and plays. In fact, I read anything I could get my hands on.

Years later (no, I’m not admitting how many) I’m still an avid reader, and my tastes are still as varied as they were in my youth, which I suppose helps to explain why I enjoy writing regency historicals under the name of Deborah Raleigh, as well as my contemporary paranormals as Alexandra Ivy. For now that is enough to keep me busy, but who knows what the future might hold!

I do have a few other loves in my life besides reading and writing, the most important being my unbelievably patient husband, David, and my two sons, Chance and Alexander. Without their constant support and belief in me, I never could have been able to follow my dreams. They are truly my heroes.

Laura Wright is a New York Times and USA Today bestselling author. From Laura: “Unlike many of my peers in the writing world, I wasn’t a writer or a reader until I left high school. During my youth I was into theater, song and dance, commercials and boys. I loved romance surely, but I had never read a romance novel until my late teens. With that said, I remember the day I did like it was a moment ago – my aunt gave me the Jude Deveraux novel, Knight in Shining Armor and I couldn’t put it down until the very last word. Then I went straight to the library and got another – then another until I’d read everything she’d ever written. After that, it was McNaught, Howard, Schone, Kleypas, and the Silhouette line, Desire. I instantly loved those emotional, sexy reads, so much so that I began to carve out ideas for my own stories, themes that were unique to me and moved me. In 1997 I enrolled in UCLA extension writing classes, met my mentor and critique partners and since have never stopped writing. I was committed then and I still am now; the need to tell my own romantic stories a full on obsession. My first manuscript was rejected, and though the second one was as well the editor who’d rejected it wanted to see something else from me. I had something (note to authors; always keep working, even after you’ve sent in a proposal) and sent it right away. The day I got the call telling me Desire wanted to buy Cinderella and the Playboy was the best day of my life. That is until I married my husband, and had my two beautiful children. But I must say, writing is much like motherhood – tough, grueling, surprising, delicious and for me, a dream come true.”