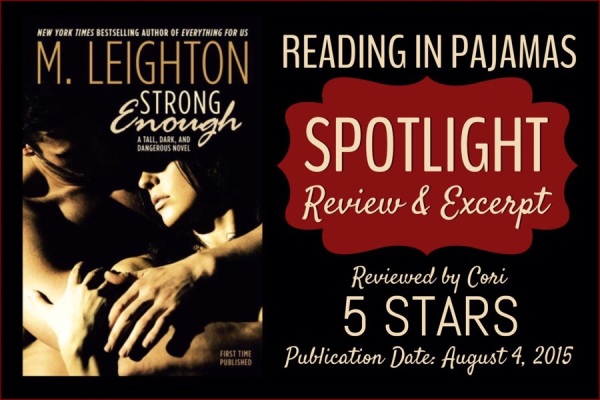 From the author of the New York Times bestselling Bad Boys novels comes the first in a dark, sexy contemporary trilogy.

How would I describe myself? Well, I’m Muse Harper. I’m a twenty-something painter who loves red wine, quirky movies, and men with a fatal flaw. But that was before I met Jasper King. He became my fatal flaw. Eight months ago, I had a choice to make—abandon everything I’ve ever known to protect my family, or stay and risk someone getting hurt. I chose the former. My plan was working just fine until I found out my father had gone missing.

That’s when I met Jasper. A bounty hunter with the eyes of a tiger and the nose of a bloodhound, he was supposed to help me find my father. What I didn’t know was that meeting him was no accident. Hunting people isn’t all that Jasper does. And helping me was only part of his plan. I just wish I’d found out sooner, before my heart got involved. But even then, I don’t know if I’d have done things differently.

Now, I have another choice to make—trust the man that I’m falling in love with and hope that he’ll do the right thing, or run as far away from him as I can get.

I loved this book! I’m obsessed with Jasper and I’m obsessed with the rest of the special ops guys that will be getting their own books later. Strong Enough is the first book in this series and with the series title alone it grabbed my attention. Tall, Dark and Dangerous? Yes, please! Strong Enough starts off with a bang. M. Leighton will rip your heart out, shred it and then sew it back up and hand it back to you all repaired by the end of the book. Jasper and Muse’s book is an emotional, beautiful and scorching hot love story. It’ll be one of my top favorites of 2015. This is a standalone book and each book in the Tall, Dark and Dangerous series will be about a different member of a special ops team. I recommend you grab a copy of Strong Enough and fall in love with Jasper. I’ll be stalking the next book in the series!

I watch her lush lips part, her breathing already shallow. She’s off-kilter. Just the way I like. “Are you Tracey’s friend?” she asks, finding a coherent thought and clinging to it.
“I am,” I reply, reaching around her to lay the pencil on the desk. The action brings my face to within an inch of hers and our arms brush. I hear the soft gasp of her inhalation.
“Why didn’t you just tell me? You didn’t have to pretend to be a customer.”
Anger. It rushes in to clear away the cobwebs. I can see it in the way her sleepy green eyes start to flash like two fiery emeralds.
“I wanted a few minutes alone with you before you went on guard. Like you are now.”
“Why? Am I being interviewed or something? I thought I was the one hiring you.”
“You are. But I like to know who I’m working for when I take a job like this.”
While the look on her face says she doesn’t approve of my tactic, she’s too curious to let it go. “And?”
“And what?”
“And what did you find out? What do you think you figured out about me in ten minutes of silence?”
I hold her gaze for long, quiet seconds before I speak. I sense how uncomfortable it wmakes her. I’m used to it. Such directness makes most people uncomfortable, but that doesn’t stop me. Keeping others off balance is always a benefit to me. “I don’t need to interrogate you to learn things about you. Being with you is enough.”
“Yeah, right,” she scoffs, trying for casual.
“For instance, you’re a hard worker who takes her job seriously, even though I don’t think it’s really the job you want to be working. You’re good at this, but you’re not quite at home here, which tells me that this isn’t permanent. You looked sad and distracted when I came in, like you might be missing someone. Maybe that is where home is. And then there’s the fact that you’re trying to hire me. I’d say that accounts for the worried frown I keep seeing between your eyebrows.”
Her mouth drops open for a few seconds before she snaps it shut. “Is that all?” she asks sarcastically, pulling her vest tighter around her middle like she feels naked. I’m used to that, too. No one likes to feel exposed, like their secrets aren’t theirs to keep anymore.
“No, that’s not all, but I doubt you want to hear the rest.”
She eyes me warily for a few seconds before she raises her chin, eyes locked bravely onto mine. “Of course I do.”
She’s courageous. Ballsy. I like that.
“Well, just off hand you have a good eye for color, which makes me think you’re artistic. Artists are usually very . . . emotional. I’d say that when you’re not consumed with concern you have a tendency to throw yourself into the way you feel regardless of potential outcomes.”
“You can’t possibly know that.”
“I can. And I do. Just like I know you wash your hair in something that contains lilac.” Her eyes widen, but she says nothing so I continue, leaning in ever so slightly. “And then there’s the fact that you’re attracted to me. You don’t want to be. You probably even think that you shouldn’t be, but that’s like catnip for you, isn’t it?”

New York Times and USA Today Bestselling Author, M. Leighton, is a native of Ohio. She relocated to the warmer climates of the South, where she can be near the water all summer and miss the snow all winter. Possessed of an overactive imagination from early in her childhood, Michelle finally found an acceptable outlet for her fantastical visions: literary fiction. Having written over a dozen novels, these days Michelle enjoys letting her mind wander to more romantic settings with sexy Southern guys, much like the one she married and the ones you’ll find in her latest books. When her thoughts aren’t roaming in that direction, she’ll be riding wild horses, skiing the slopes of Aspen or scuba diving with a hot rock star, all without leaving the cozy comfort of her office.

If you’d like to know more about me…like MUCH more…like more than you’d ever really want to know…you can read my story here.