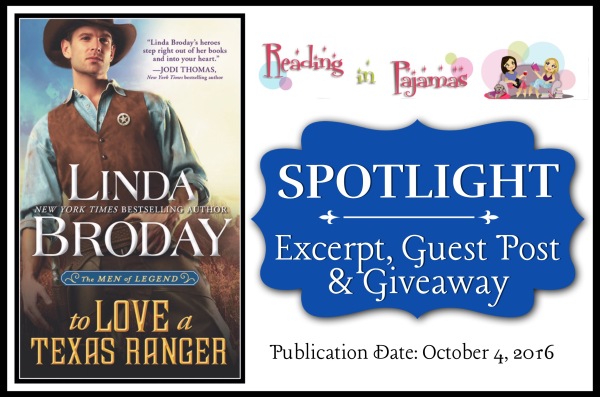 To Love a Texas Ranger (Men of Legend) by Linda Broday

Gravely injured on the trail of a notorious criminal, Texas Ranger Sam Legend boards a train bound for his family ranch to recuperate…only to find himself locked in battle to save a desperate woman on the run. Determined to rescue the beautiful Sierra, Sam recruits an unlikely ally. But can he trust the mysterious gunslinger to fight at his side?

Sam is shocked to discover his new ally is not only an outlaw, but his half-brother. Torn between loyalty to his job and love of his family, Sam goes reeling straight into Sierra’s arms. Yet just as the walls around his battered heart begin to crumble, Sierra is stolen away. Sam will risk anything to save her—his life, his badge, his very soul—knowing that some bonds are stronger than the law…and some legends were born to be told.

“Stop, Weston! Stop, damn you!” Sam raised his gun and fired. A large tree trunk shielded the outlaw as he rode by, the bullet splitting the bark. Weston never looked back.
Only one thing remained—see if the outlaw had left them a horse, or untied and run them all off.
The overlapping branches had kept back much of the deluge. Though water dripped from the leaves, the ground was firmer here. He moved forward, afraid to hope. It wasn’t for him but for Sierra. She wouldn’t last long afoot.
He finally glimpsed movement through the leafy forest and made out the shapes of horses.
Sam gave a sigh of relief. At least they had a way to travel.
That Weston had again shown a smattering of compassion came as a shock. He’d done wrong but had turned around and tempered it with good. Just like the time he’d shot Sam in the leg then sent help.
Damn, if he could only figure the outlaw out!
A sound from behind alerted Sam Legend. Was it Luke doubling back and sneaking up behind him? He whirled, his finger tightening on the trigger, and shoved his Colt into the person’s face.
A jolt raced through him as he stared at Sierra.
She gasped, her eyes wide in fear.
“Thought I told you to stay in the shack.” He hated the angry words, but he reeled from the shock of how close he’d come to ending her life.
His jagged nerves had trouble settling for several beats of his heart. He could still feel his finger pulling back on the trigger that would’ve sent a bullet into her. Sam’s hand shook as he returned the Colt to his holster.
“I couldn’t wait. Something’s going on. What’s wrong, Sam?” A quiver in the words spoke of Sierra’s fear. “Where’s Andrew?”
“Andrew Evan is the outlaw Luke Weston, and I’ve been chasing him nigh onto a year.” At her soft cry, he put his arm around her and held her next to him. “I recognized him this morning when I finally saw him without his hat. Those eyes are burned into my memory.”
“I liked him. He seemed real nice. You suspected, didn’t you? That was the reason for the tension I kept feeling.”
“I knew he was familiar, but it’s been hard trusting my instincts lately.” He smoothed back her tendrils of dark hair. “Forgive me? I almost shot you. Lady, you scared me out of ten lives.”
“Of course. I should’ve done as you told me, only I heard shots. It’s my fault.”
Sam tried to drag his stare from her tousled hair and soft curves that the trousers did little to hide. She was a sight for sure. He swallowed hard, trying not to think about running his hands over her satiny skin and kissing her until neither had an ounce of breath left.
He felt more like his old self, and he realized it was because of her. She’d fixed him by pushing back the darkness and allowing light into his life. By giving him something—someone—to be a hero for. A swell of deep gratitude rose as he struggled to contain his emotions.
“No, no. I beg to differ, pretty lady. I see no fault at all with you.” He looked deep into her blue eyes that saw only goodness. “Since you’re here, can you help me bring the mounts to the shack?” Somehow, someway, he’d return the horses that didn’t belong to the Ford gang to their rightful owners.
“Sure, Sam.” Pride, and maybe a little sadness too, rippled in her pretty eyes. They reminded him of a pale blue sky. In fact, he wasn’t sure if they were blue or gray. Maybe a combination of both. Whichever, he loved looking at them.
Her softly parted lips beckoned like a light that guided sailors on a dark, storm-tossed sea.
Kissing her was the only thing on his mind. Not Luke Weston. Not the trials they faced ahead. Not the time he’d have to spend twiddling his thumbs on the Lone Star Ranch. He knew he had to taste her mouth or die wanting.
Placing his large hands below her jawline, Sam lowered his head and gently pressed his lips to hers. Heat pooled low in his gut as he tasted the tangy sweetness that did faintly resemble wild honey. Just as he’d imagined.
He tried to hold back, to make the kiss light and meaningless, but his need for her made it impossible. In seconds, the gentle kiss turned urgent, demanding a response.
And Sierra did answer his invitation. With a smothered cry, she leaned into him, clutching a handful of his shirt, holding him to her. The passion and desire that filled Sam seemed to have swept her along.
That she didn’t pull away sent joy through him.
A low moan rumbled in his throat as he slid his hand into her dark hair. The satiny strands wrapped around his fingers, tethering her to him. Closing his eyes, he savored the feel of her soft curves molding against the hard planes of his body.
In that second he knew heaven wasn’t only golden streets and angels playing harps.
Heaven was Sierra Hunt in his arms.

Ever since I’ve been writing and publishing westerns (14 years now) I’ve heard that this genre is dead. I don’t know who started that nasty rumor but I have to say that historical western romance is very much alive. Romance readers love books about cowboys—whether they’re historical or contemporary. Cowboys are much more than men who babysit a bunch of cows. These men have a deep love for the land, for their families, and for animals. I want to share one of my favorite westerns with you. It’s a 5-star read in my book.

FUGITIVE HEARTS by E.E. Burke will keep you turning the pages. From the opening line—“Sheriff, I just killed my husband”—to the very last page, Burke will hold you in suspense. Is she a killer? Is she crazy? Or is she covering for someone? As Frank unravels the mystery, he’s torn between his love for her and his duty to bring her to justice. Claire Danes with her level head and logic is the perfect match for Sheriff Frank Garrity. He needs someone to help heal the hole in his heart and Claire is just the one to do it. This is book #4 of her Steam! Romance and Rails series. Fugitive Hearts is a riveting story woven together with amazing skill.

I hope you’ll try out my newest – TO LOVE A TEXAS RANGER. Texas was a wild place and one man, Texas Ranger Sam Legend, answered the call to help tame it. He’ll take you on a dangerous journey full of twists and turns. Follow along as he finds love where he least expects it.

5 copies of To Love a Texas Ranger

At a young age, Linda Broday discovered a love for storytelling, history, and anything pertaining to the Old West. Cowboys fascinate her. There’s something about Stetsons, boots, and tall rugged cowboys that get her fired up! A New York Times and USA Today bestselling author, Linda has won many awards, including the prestigious National Readers’ Choice Award and the Texas Gold Award. She now resides in the panhandle of Texas on the Llano Estacado.