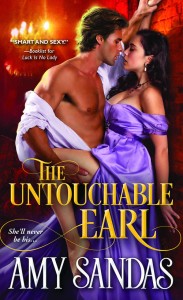 “Are you afraid?”
“Yes,” she replied in a soft voice. “But I love the way you frighten me.”

Lily Chadwick has spent her life playing by society’s rules. But when an unscrupulous moneylender snatches her off the street and puts her up for auction at a pleasure house, she finds herself in the possession of a man who makes her breathless with terror and impossible yearning…

Though the reclusive Earl of Harte claimed Lily with the highest bid, he hides a painful secret—one that has kept him from knowing the pleasure of a lover’s touch. Even the barest brush of skin brings him physical pain, and he’s spent his life keeping the world at arms’ length. But there’s something about Lily that maddens him, bewitches him, compels him…and drives him toward the one woman brave and kind enough to seek to heal his troubled heart.

Brooding heroes. I’ve always been drawn to them over all other hero types. They stay in my mind long after they attain their happy ending, perhaps because that HEA tends to be so hard-won. They tend to carry around scars that won’t heal and painful memories that won’t fade, closing themselves off from others, fearing judgement or further hurt. I love their complexity, their secrets, the deep inner darkness they don’t bother to hide, and the tenderness they don’t want you to find.

Who are my favorite brooding heroes?

Derek Craven from Dreaming of You by Lisa Kleypas – Derek Craven is one of my favorite romance novel heroes of all time. It is not just his ruthless determination to distance himself from the gutters from which he had been born that makes him so alluring, or even his rough, almost brutish masculinity, though it certainly helps! Craven is a man of power and wealth of his own making, he is “a figure of mystery; arrogant, self-mocking, sociable and yet intensely private.” Ultimately, it is the unexpected sentimentality buried in depths of Craven’s soul that gives him his greatest mystique and urges a worthy woman to bring light to his darkness.
Avenell Slade, the hero in my latest title, The Untouchable Earl, is also a wonderful brooder. Keeping people beyond arms reach is vital to his survival in a society that would scorn him for the physical affliction he acquired from a childhood illness. No one can know his secret, and that means no one can get too close. It is a wretched existence made only more devastating when he meets Lily Chadwick, a woman whose closeness he desires beyond all else.

“Are you going to try the champagne?” she asked.
He looked at the elegant glass in his hand. The act had become such an ingrained habit that he never even thought about it anymore. But then, no one else seemed to notice when he did not actually raise his glass to drink.
“I prefer not to have my judgment clouded.”
In truth, he never consumed anything that might promote a loss of control while among society. He had to be ever diligent if he was to successfully maintain his composure.
Perhaps tonight more than ever.
“Then why pour yourself a glass?”
“It has become habit, I suppose. A way to blend with my peers and avoid drawing attention.
She tilted her head. A smile played about the corners of her mouth. “You do what you can to blend in, whereas I’ve always secretly wished I possessed some quality that might help me to stand out. We make an odd pair, my lord.”
Avenell’s lips curved upward involuntarily. “We do indeed, Miss Chadwick.”
He hadn’t intended the intimate tone that had crept into his words, but in seeing her eyes widen with that barely perceptible reaction she had to him, he was glad for it. Knowing he could cause the involuntary response made him feel as though they were on a bit more equal ground.
“Will you call me Lily?” she asked with a modest dip of her chin. “It feels odd to be so formal, considering our…association,” she added hesitantly.
It took him a moment to gather himself enough to respond. “Would you like me to call you Lily?”
“Yes. I think so.”
He nodded.
“Shall I call you Avenell?”
Hearing his name on her lips created a fine point of pressure in his chest. He instinctively squared his shoulders in defense. Although he was pleased she would allow him the intimacy of using her given name—in fact, he intended for her to share far more intimacies with him—he could not do the same in return.
“I prefer you address me as Lord Harte.” He knew his words sounded cold, but there was no help for it. “Or my lord.”
A shadow slid across her expression at this response. Her mouth curved softly downward in a way he found intensely alluring. A tiny line formed above her brow, then quickly disappeared. He could see his refusal bothered her. For a moment it appeared she might dispute him, but she held her tongue.
While she remained silent, Avenell felt an unusual desire to provide some sort of explanation. Not all of the truth, perhaps, but something to help her understand that the denial was not a personal rejection.
“I have never kept a mistress,” he began, carefully easing into what he needed to say.
“I recall you telling me as much,” she replied. “And of course, you know I have never been one before.”
Her tone was gentle, and her features were set in a perfect expression of serenity, but he could have sworn he detected a note of dry humor in her tone. Her composure despite the subject matter astounded him. She was so unlike the typical modest young lady.
Something in the steadiness of her gaze urged him to glance away, to look anywhere but at her. He resisted the temptation and began again. “I never entered into such an arrangement because I knew there would be an expectation of certain liberties that I cannot allow.”
There was a long pause, during which the point of pressure in his chest spread outward. Then she tilted her head in a subtle gesture.
“What sort of liberties?” she asked softly.
Her voice had changed. It was difficult to identify exactly what it was, but it warmed him. Made him feel a burst of impatience, a wave of deeper desire. He took a moment before he replied.
“You will understand more fully soon enough. But I promise, I will not allow my limitations to lessen the pleasure you experience during our association.”
A blush pinked her cheeks. But she did not look away.
“And what of your pleasure, my lord?” Her voice was soft and low. Smoky, like her eyes.
It weaved through Avenell’s senses and hit him hard in the gut. Heat scored through his insides on a direct path to his loins. He had suspected from the start that her gentle manner had lured him so strongly. But the unexpected boldness in her query had an intense effect on him.
His arousal roughened his tone as he answered, “My pleasure is assured. Do not doubt that.”
The pink in her cheeks spread down across her chest and the upper swells of her breasts, but still she held his gaze. He wondered what she might be thinking. Her stillness was disconcerting when he sensed so much going on inside her.
After a few moments, her lashes swept low as she looked down at the glass of champagne held lightly in her hands.
Avenell set his own glass on the mantel over the fireplace and turned to face her more fully. It was time to begin.
“Come here, Lily.”

10 Copies of Luck is No Lady

Amy Sandas’ love of romance began one summer when she stumbled across one of her mother’s Barbara Cartland books. Her affinity for writing began with sappy pre-teen poems and led to a Bachelor’s degree with an emphasis on Creative Writing from the University of Minnesota-Twin Cities. She lives with her husband and children in Wisconsin.