OUT OF TIME (The Lost Platoon, Book 3) by Monica McCarty

A hunt for dangerous secrets leads to explosive chemistry in this exhilarating romantic suspense novel from the New York Times bestselling author of Off the Grid.

A team of Navy SEALs goes on a mission and disappears without a trace–they are the Lost Platoon.

With his men scattered to all corners of the globe after a disastrous secret op in Russia, Lieutenant Commander Scott Taylor is trying to find out who was responsible for leaking the information that killed half his platoon. Were it not for Natalie Andersson, the woman he had been secretly dating in the Pentagon who had warned him of the danger, he knows they would all be dead. Scott is devastated when he hears that the woman he loved and hoped to marry has been killed for helping him–until he learns that Natalie was the spy who betrayed them. But when his search to clear his name brings him face-to-face with a very-much-alive Natalie, Scott realizes that justice and vengeance might not be as clear-cut as he thought.

Natalie Andersson, or, as she was born, Natalya Petrova, has put the memories of her early childhood in Russia behind her. She never dreamed that she would be at the center of an elaborate “sleeper” espionage program. Even when she learns the truth, she refuses to spy for the country of her birth, until the Russians threaten the lives of the only family she has ever known. But Natalie is the worst spy in the history of spying, falling for her target. When her attempt at misdirection leads to irreversible consequences, she is forced to run for her life, with her lover hot on her tail.

I enjoyed this installment in the Lost Platoon series, even though it started out a bit slow for me. There was a lot of talking about and searching for clues to what happened in Russia. It picked up for me about a third of the way in. I like Natalie and understand why she did the things she did, I also understand her attraction to Scott. Their relationship sure needed some work, but their physical relationship was spot-on. I am glad questions were answered, and that the series is moving in a slightly different direction. Maybe then the Unit will be together and hopefully show the camaraderie that I love with group series. 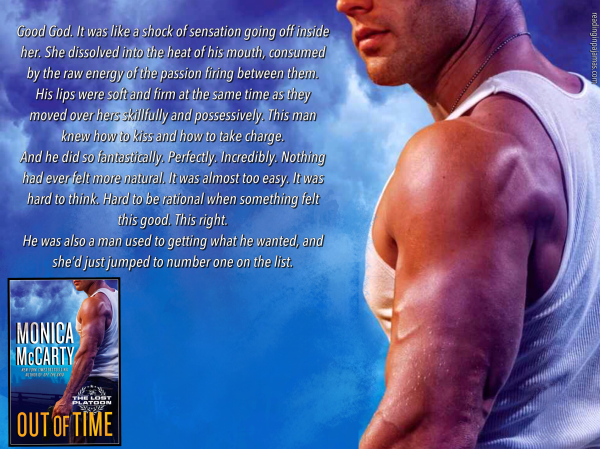 Paperback Copy of OUT OF TIME (The Lost Platoon) by Monica McCarty.

Monica McCarty is the bestselling author of The Arrow, The Raider, The Hunter, the Highlander trilogy, the Campbell trilogy, and more. Her interest in the Scottish clan system began in the most unlikely of places: a comparative legal history course at Stanford Law School. After a short but enjoyable stint as an attorney, she realized that her career as a lawyer paired with her husband’s transitory life as a professional baseball player was not the best match. So she traded in her legal briefs for Scottish historical romances with sexy alpha heroes. She now lives in the San Francisco Bay Area with her husband and their two children.