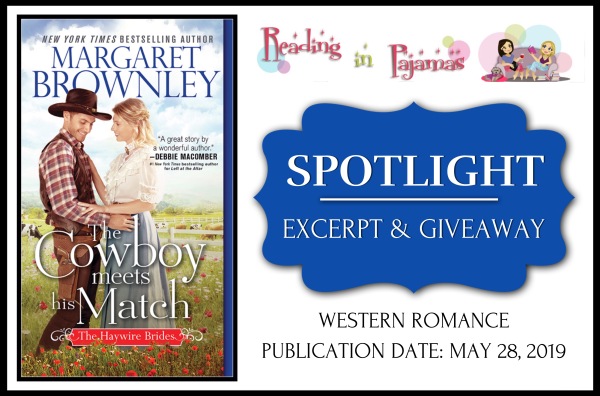 THE COWBOY MEETS HIS MATCH (The Haywire Brides Series, Book 2) by Margaret Brownley

His first mistake was marrying her.

His second was falling in love.

Chase McKnight will do anything to secure his family’s ranch—but marriage to a complete stranger? That’s a hard pill to swallow. Yet the will is clear: Chase needs a wife by his side if he wants to keep his home, so he meets his veiled lady at the courthouse steps and reluctantly says “I do”.

Too bad he married the wrong bride.

When Boston runaway Emily Fields agreed to marry a Texas stranger to escape her family’s scandal, she wasn’t prepared to get hitched to the wrong cowboy! Stuck in a secret compromise, she has one year to learn the ways of the ranch and convince Chase’s family they’re happily married. But when the lie becomes true, the past catches up to them and they must save the love they never expected… 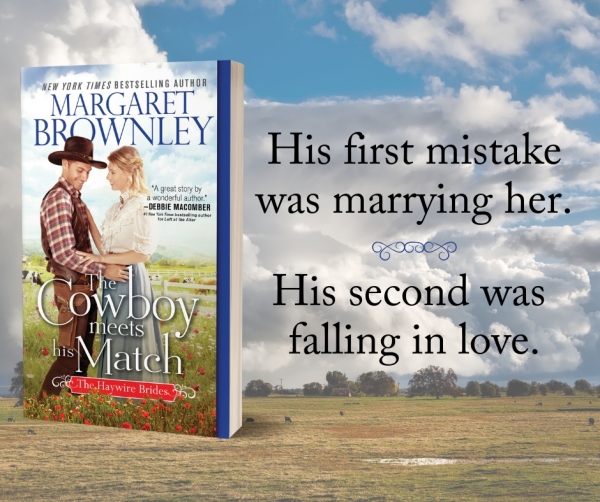 Watching Emily stagger away like a drunken cowhand, Chase kicked himself mentally. Now he’d done it.
All he’d wanted to do was keep a safe distance from her emotionally. It was the only way he could keep from thinking things he had no business thinking. Things like how she’d looked in that blasted towel.
But he’d gone too far, and now it appeared he had pushed her away completely.
He hated thinking that he’d taken out the resentment toward his father on her. She wasn’t to blame for any of this and was as much a victim of circumstances as he was.
Feeling lower than low, he watched her cross the yard for a moment before chasing after her. She might not admit it, but it was clear by the way she limped that she was hurting.
Emily stopped when he caught up to her. “Now what?” she demanded, eyes flashing.
“I just want to make sure you’re okay.”
If she was surprised by his interest in her welfare, it didn’t show. “I’m fine!” she snapped. “No thanks to you.”
Yep, she was hurting all right. He could see the strain in her eyes. She also looked like she’d been through the wringer. She straightened her hat, but not much could be done for the abundance of yellow hair that had sprung free from its bun. The intriguing smudge on her cheek, however, called for a man’s touch. His touch.
When he reached a finger to her smooth, silky skin to rub the spot away, her startled blue eyes met his. “Sorry,” he said, pulling his hand away. “You had somethin’ on your face.”
Her hand flew to her cheek, and her already heated face turned another shade darker.
“It’s gone now,” he said.
Her mouth formed a perfect circle, and she lowered her hand to her side.
He felt bad for giving her a hard time. Lack of sleep had made him start the day out of sorts, and his encounter with Cassie Decker hadn’t helped. Poor woman. She had counted on their marriage for her children’s sakes.
His failure in keeping his promise to Cassie had made him more determined to do right by Emily. Or at least to see to her safety. He’d let one woman down; he sure in blazes didn’t want to fail another.
Horses were dangerous. The land was dangerous. But a part of him knew there was more. A lot more. As long as they were at each other’s throats, he could control his thoughts. Or at least keep from dwelling on such things as Emily’s gold-tipped eyelashes. Or the little indentation on her cheek when she smiled. Or even the way her eyes flashed during their many confrontations.
Looking away, he reminded himself how unsuited she was for ranch life. How unequipped she was to deal with the harsh land. She was much more suited to the city.
“Tomorrow, we’ll go a little easier with your lesson,” he said, hoping to make amends for his bad behavior.
She lifted her chin, her face dark with anger. “There won’t be any more lessons.”
“Come on,” he said gently. “You don’t mean that. Look at you. You’re fine.” More than fine…
“No thanks to you!”
Surprised by the vehemence in her voice, he stepped back “Me? What did I do?”
Her blazing blue eyes met his. “You put me through hell, that’s what!”
“By teachin’ you the proper handlin’ of a hoss?”
“By making me obey your every command like a helpless imbecile!”
He drew in his breath. He’d been rough on her, but he never meant to make her feel bad. “You have to admit your knowledge of hosses leaves much to be desired.” Taking her silence to mean she agreed, he added, “Tomorrow, same time, same place.”
She shot visual daggers at him. “If you expect to have your way with me a second time, you better think again.” With that, she stormed away.
Her words struck a chord that was better left untouched. Still, he couldn’t hold back the words that popped into his head. “Trust me,” he called after. “If I wanted to have my way with you, it wouldn’t be on a hoss!”

Margaret is a New York Times bestselling author and two-time Romance Writers of America RITA finalist, with more than 40 novels to her credit. Not bad for someone who flunked 8th grade English. Just don’t ask her to diagram a sentence.