Tangling with the London Tycoon (Brick Square #1) by Suzi Jennings 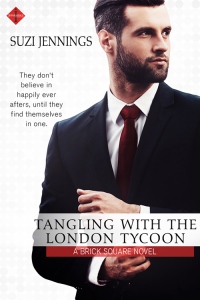 London publishing tycoon Rosco Redmond closely guards his family, his business, and his privacy. When his sister’s wedding brings the paparazzi baying at his door, wedding photographer Kitty Mayfair unwittingly becomes his decoy girlfriend. But the mysterious Kitty has secrets of her own.

Despite the sexy hint of an appealing Irish brogue, Kitty’s new boss is bent on micromanaging his sister’s wedding and the crazy fake relationship she’s been dragged into. The only thing they seem to have in common, is that neither of them believes in happy-ever-afters. But the more time Kitty spends with the tycoon, the more she begins to suspect there’s a lot of fire beneath his cool facade.

With the past complicating their present, and the zoom lenses of photographers everywhere they go, the commitment phobic control freak and the globe-trotting free spirit clash and ignite.

Rosco Redmond was an opportunity Kitty couldn’t afford to mess up.

The door to his Georgian town house lacked any attempt at welcome. It faced the world with immaculate London style—glossy black paint against warm cream stone—handsome but unadorned.

But it had Kitty’s heartbeat thundering in her ears as unwanted memories flooded her in a cold tide of rejection. Memories of the miserable childhood she’d purged from her adult life.

It was the worst coincidence that the Redmond house looked an awful lot like her childhood home and represented the kind of world Kitty never wanted to be part of again.

The unexpected shock had all her buried insecurities nibbling at her confidence.

But she’d never walked away from a challenge since she was sixteen, when her mother died and left her alone. A time of shame, of dark and painful memories usually left undisturbed and firmly in the past where they belonged.

Shaking them off now, she faced the house squarely, rocking discreetly from foot to foot to ease the ache of her highest heeled boots. She’d chosen them for courage, so she didn’t mind the pain.

Straightening her back, she commanded her nerves to focus and smiled as her fingers caressed the worn strap of the camera hung around her neck.

She could do this job.

Plucked at short notice from the lowest ranks of LJ Redmond Publishing’s contracted photographers for this urgent assignment, she couldn’t believe her luck. It was a matter of timing, the human resources department had informed her, because all of Mr. Redmond’s senior photographers were unavailable at this time.

She would do whatever was required, as her financial security depended on nailing this project—whatever it turned out to be—and taking her best photos ever.

Kitty took one last look at the imposing three-story building, sucked in a deep breath, and bounded up the four steps to the porch. She found the discreetly recessed doorbell and pressed it for a long, determined ring.

Hoisting her camera bag onto her hip, she took another steadying breath as the sound of security locks opening reminded her this was serious business.

Then Rosco Redmond, CEO of his family’s Investment and Publishing Groups, stood in the doorway. She’d expected a butler in coattails or a housekeeper to answer the door.

The man himself was tall, lean, and gorgeous. Tailored for business in an impeccable dark suit and blood-red tie.

Can you tell us a little about your book?

Tangling with the London Tycoon is a contemporary romance between Rosco Redmond and Kitty Mayfair, two characters who think they have nothing in common. In fact their perceived differences are the very reasons they should be together.

It takes them a while to see this for themselves!

In the meantime they endure a complicated sort of fake relationship, are hounded by the paparazzi, feel harassed by memories of childhood traumas, and try to resist being seduced by the promise of their own happily ever after.

How did you come up with the concept and the characters for the story?

Rosco and Kitty popped into my head as fully formed characters. I loved them instantly. Kitty made me laugh and Rosco made me smile–he was doomed from the moment he opened his smart London door!

Name one thing you won’t leave home without.

My diary. I need to write things down to ensure they happen!

What do you like to do when you aren’t writing?

Read, Pinterest, garden, and dream of travelling on a castle tour.

What types of scenes are your most favorite to write?

I love writing witty dialogue scenes with lots of underlying emotion and sensual attraction. My current favorite is under a table at a wedding—you’ll have to buy Tangling with the London Tycoon to read it.

Suzi Jennings lives in New Zealand and writes international stories of love and laughter. It all started in childhood when she discovered reading, scribbled stories about princesses in castles, and grew up to spend way too much money on books.

She writes contemporary romance where family secrets, powerful friendships and enduring loves heal hearts and forge happily-ever-afters. Her characters are feisty, flirty, fun – and talkative! It’s a match made in keyboard heaven as Suzi is more than happy to listen.

When not writing she can be found on Pinterest, sipping creamy lattes, still dreaming of castles she’d love to visit