Tee is Vegas’s favorite casino hostess, ready to grant her high rollers their every quirky wish. But when her own wish to financially help her Paiute Tribe finally comes true, she decides to double-down with lady luck and go for a hot hook-up with her sexy boss, Leo. Unfortunately, Tees about to find out why their romance is such a long shot—Leo is a shape-shifting dragon.

Leo needs a proper dragon mate to save his waning dragon form, and despite their magnetic sexual attraction, he knows Tee is anything but proper—or a dragon. But when threats arise from Tee’s tribe, Leos protective instincts kick in. Can he give up his dragon form for the woman he loves—even if it means shortening his life? Or has Tee finally had enough of having her heart dragged around?

A sexy dragon shifter romance where the hero looks like Thor? Yes, please! How could I not enjoy his story? This is the second book in Susannah Scott’s dragon shifter series and is set in a Vegas casino. The dragons can hide in plain site in the magic filled city. I enjoyed the storyline and the characters in Stop Dragon My Heart Around. Tee is a casino hostess that works for Leo who has been in love with Leo since she met him. While Leo wants Tee he doesn’t think she is his mate and she has to fight to get Leo to admit his feelings for her. Their chemistry together heated up the pages. I can’t wait for the next book in the series! I recommend this series for readers looking for a steamy dragon shifter romance that is a quick read. This book can be read as a standalone, but I recommend starting with the first book to enjoy the entire series.

*Review copy provided by Entangled Publishing in exchange for an honest review.

Stop Dragon My Heart Around Rafflecopter:

“It’s that hotty superhero with the hammer.” Angie pointed at Leo. Her mouth hung open to show a brass tongue piercing.

“Thor,” Trixie whispered and smacked her gum again. “I bet he has a big ole hammer too.”
Beside her, Leo smiled and shrugged, like he had some super hero secret he couldn’t share.

“This is not Thor,” Tee said with an uncomfortable laugh. Next to the diminutive young women, she felt gawky. She straightened her stooping shoulders and stretched to her full height. Then, she gave the two a smile she hoped conveyed patient helpfulness.

Leo was tall, even taller than her, with blondish hair that brushed his shirt collar. His eyes were deep set like the actor’s, and he definitely had the forearms and muscle packed in all the hunky places. But he was so much more than some hammer-throwing cartoon.

He was Leo. He was real, and she’d wanted him from the first moment he’d walked toward her across the Bellagio foyer. Then he’d smiled at her, and her heart had done a ridiculous loop-de-loop and she’d been lost.

“Just answer me one question and I’ll never bring this up again.”

Tee stepped closer to him so the front of their bodies touched. Leo leaned against the elevator wall away from her, but not before she felt the evidence of his desire. “Do you want me?”

He dropped fisted hands from his pockets. “No.”

“You’re lying.” She leaned against him, feeling the heat of him down the front of her body. “Why would you lie about something that’s so easy to disprove?”

“You said one question.”

His denial fired through her doubt. She knew he wanted her. The heat of his body touched her bare legs, and an achy need tightened her spine, stretching her closer to his mouth.
“Then what I wear or don’t wear shouldn’t bother you at all.” She stepped close enough to feel the fabric of his suit on her bare legs. Feel the bulge of aroused man between his legs. She put one arm on either side of him, caging him. “My being this close to you shouldn’t bother you at all either.”

“It doesn’t.” He shoved his arms between them and raised his head so she saw the underside of his chin. He hadn’t shaved. The stubble of his beard poked through his skin, and she wanted to kiss it, to taste the slight saltiness.

She put her lips to the juncture of his jaw and ear. 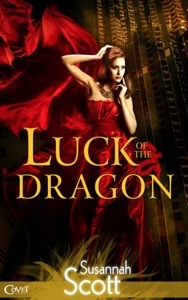 BOOK DESCRIPTION:
Luciana de Luca has a PhD in sass and gemology–and a problem. Her twin brother’s gambling debts have gotten out of hand, and a mob enforcer is blackmailing her to rob the latest, greatest mega-casino on the Strip. Although Lucy has worked her whole life to get away from her family’s grifter past, to save her brother, she dons three-inch heels and a sluts-r-us dress and struts into Alec’s Gerald’s casino, determined to put her long-forgotten thieving ways to the test again.

Alec Gerald, a shape-shifting dragon, has built the Crown Jewel casino to provide sanctuary for his people amongst the flash and awe of Las Vegas. Unfortunately, the sexy little thief trying to rob his gem exhibit turns out to be his mate, and he must woo her before he loses his dragon form forever. With enemies in every corner, and the all-important mating ceremony looming, Alec and Lucy must learn to trust each other, before time runs out for Alec and the rest of the dragons.

REVIEW:
I love books with dragons! I’ve always rooted for the dragon over the white knight. I’d rather have the dragon! This was a gripping story! Alec, the Black Dragon, created a haven for dragons in Las Vegas. Dragons can hide in plain view and the audience thinks it’s an illusion and part of the show. A lot of the dragons are in danger of losing their dragon if they don’t find their mate and no dragon has ever found their mate in a human. When Luciana steps into Alec’s casino he is surprised to discover his mate is human. Alec has hired Luciana to appraise his gem collection and Gio, a local criminal, is blackmailing her into helping him steal the gems by threatening her brother who is in debt due to a gambling addiction. Alec has to convince Luciana he’s the one for her while trying to stop his gems from being stolen, and protecting Luciana from whatever trouble she is in. I loved the characters and the plot was gripping. The author set up the ending to leave room for a series and I’m looking forward to reading the next book. Luck of the Dragon is a fun and romantic paranormal read!

*A review copy was provided by Entangled Publishing in exchange for an honest review.

Lucy’s head pounded right between her eyebrows. She pulled in a deliberate breath, held it, and blew it out. The action made her cleavage look downright Betty Boopish.

Good Lord. What was she doing here?

She was Luciana De Luca, Ph.D—the world-renowned gemologist—casing a hundred-million-dollar joint like it was an unprotected street vendor…

She surveyed the crowd outside the Crown Jewel Casino, waiting for the promised grand opening welcome from Alec Gerald. The crowd was typical Vegas eclectic. Show girls with nipple pasties stood next to grannies in jogging pants and comfy bingo shoes. Families held hands with their kids next to decked-out call girls and high-rollers.

Lucy moved her trained eye over the wrists, necks, and ears of the well-plumed assemblage and picked out the authentic jewels from the fakes. There were a few nice stones. A reasonable haul could be made from the crowd alone, but then Gino, the mob’s enforcer and number one creep, wasn’t interested in ordinary jewelry.

“Ladies and gentlemen.” A barrel-chested emcee wielded a microphone from the elevated stage about fifty feet to her left. “Welcome to the grand opening of the Crown Jewel Casino, where your greatest fears can become your greatest pleasures.” The call girls giggled, and the moms and dads glanced at each other and pulled their kids closer.

“It is my pleasure to introduce you to the legend, the casino maker, the King of Las Vegas…Mr. Aleeee-eeec Gerrr-aaaald!”

The crowd members swiveled their heads, scanning for the first sign of the Casino King. A low drum roll began, picking up speed until it seemed the drummer’s arms would give out. But the stage remained empty. The King of Las Vegas was late to his own party.

Miss Manners would have a conniption.

Suddenly, the scent of burning embers swirled over the courtyard and the wind settled, blowing Lucy’s loose hair around her face. A ground-vibrating roar followed, making every human eye search the sky for the source.

Lucy’s well-honed survival instincts went on high alert just as a large SUV-sized black object careened through the air and landed on the raised stage with a thud.

Heart pounding, Lucy crouched with the crowd. The acrid scent of smoldering intensified. Pounding from the stage rattled Lucy’s eardrums. Whatever had landed there was moving and alive. On the platform, clawed feet stomped, and the creature’s matte black skin stretched over powerful muscles and bones. Black wings unfurled across the stage, and the animal roared again at the crowd, baring razor-sharp white fangs.

Suddenly, a burst of smoke covered the dragon, and the creature disappeared.

A dark-haired man in an elegant tuxedo stepped through the gray fog and approached the microphone. “I am Alec Gerald.” His voice was deep, and his accent was hard to place but suggested the upper class. “I’d like to welcome you to my newest casino, the Crown Jewel.” Gerald spread an open palm to the frightened crowd. “I hope you enjoyed our first show of the evening.” He gave a devious, knowing smile. “It was all just a costume. Don’t be frightened.”

After a few seconds, the stunned audience stood and broke into applause and catcalls.

Lucy stood, glaring at the casino owner. She had researched him, of course, studying his athletic image in hundreds of Internet pictures. The man was good-looking, apparently brilliant, and ruthless in his business deals. Watching the mesmerized crowd lean toward the stage, she had to admit he had that something else too—the showmanship of a champion con man—a magnetism she knew could draw people like lemmings off a cliff.

The man was flat-out people-genic.