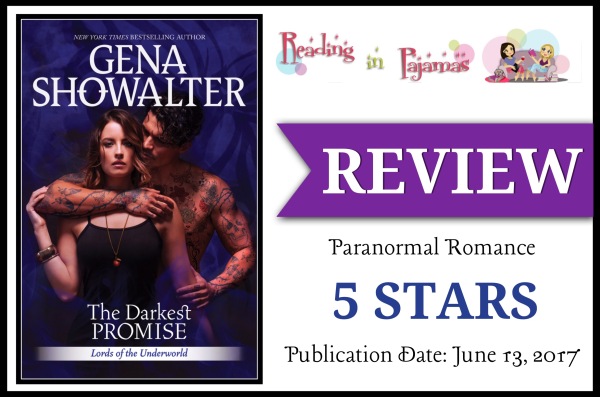 THE DARKEST PROMISE (Lords of the Underworld) by Gena Showalter 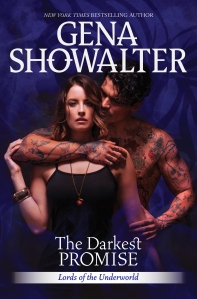 Possessed by the demon of Misery, Cameo isn’t allowed to experience joy. If she dares, her memory is wiped clean. With no other recourse, she sneaks into a land more fantastical than any fairy tale, determined to find the one man with the key to her redemption.

Lazarus the Cruel and Unusual rules his kingdom with a single unwavering focus: to build his army and annihilate his enemies. Nothing distracts him—until Cameo. He is relentless in his quest to make her smile…and seduce her into his bed.

As dark forces conspire against them, threatening to destroy the fragile bond they’ve forged, the once-calm Lazarus grows crazed. Every heart-stopping kiss and wicked touch causes Cameo to teeter on the brink of happiness. But if she falls, she risks forgetting him forever…

I absolutely loved everything about this book! THE DARKEST PROMISE is the thirteenth book in Gena Showalter’s Lords of the Underworld series and features Cameo, the keeper of Misery and Lazarus the Cruel and Unusual. I recommend reading the series in order to fully enjoy the series storyline.

I wasn’t super excited for Cameo’s book because I really didn’t know much about her from the previous books other than she was the only female LORD. I absolutely LOVED her though! She’s everything you want a heroine to be because she’s strong, passionate, emotional, and she fights for her man. Lazarus was just perfect for her! I loved their banter and I loved that he was the one to make her smile and laugh. Their chemistry and the romance burned up the pages. Viola, Rathorne and the twins, Ever and Urban added fun to the book and I want more of them! This was definitely a girl power book with all the strong female characters. Viola was there as Cameo’s friend and the villains were powerful women as well. This would be a fun book to read with your girlfriends and discuss with some wine one night.

THE DARKEST PROMISE is one of my favorite books in the Lords of the Underworld series! I couldn’t put it down and I just loved everything about it!  I highly recommend this series for paranormal romance lovers. Gena Showalter is one of the Queens of paranormal romance and she always delivers a great love story.

*Review copy provided by Harlequin in exchange for an honest review. 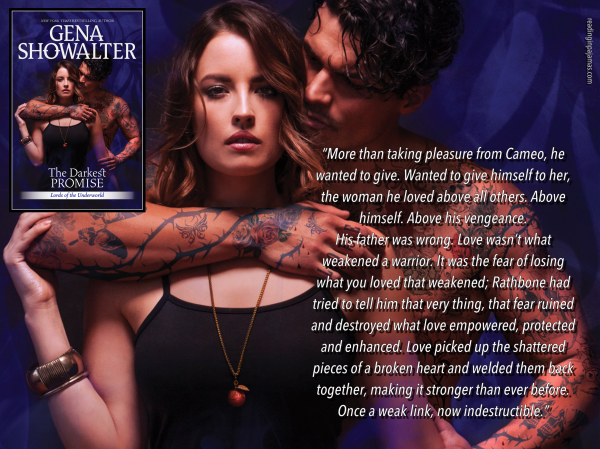 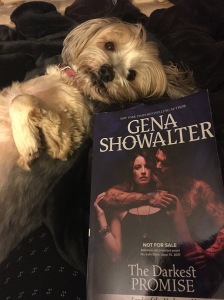 Bonnie Puppy reading with me:)