HARD TO SERVE (A Hard Ink Novella) by Laura Kaye 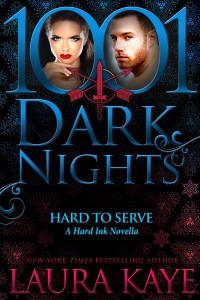 To protect and serve is all Detective Kyler Vance ever wanted to do, so when Internal Affairs investigates him as part of the new police commissioner’s bid to oust corruption, everything is on the line. Which makes meeting a smart, gorgeous submissive at an exclusive play club the perfect distraction…

The director of the city’s hottest art gallery, Mia Breslin’s career is golden. Now if only she could find a man to dominate her nights and set her body—and her heart—on fire. When a scorching scene with a hard-bodied, brooding Dom at Blasphemy promises just that, Mia is lured to serve Kyler again and again.

As their relationship burns hotter, Kyler runs into Mia at work and learns that he’s been dominating the daughter of the hard-ass boss who has it in for him. Now Kyler must choose between life-long duty and forbidden desire before Mia finds another who’s not so hard to serve.

*Review copy provided InkSlinger in exchange for an honest review.

So many readers asked for more stories in my bestselling Hard Ink series, and I’m so excited to be able to give you just that in my new, super sexy HARD TO SERVE! HARD TO SERVE is an edgy stand-alone love story about a Baltimore police detective whose red-hot BDSM relationship with a new submissive seems like the perfect distraction from a trumped-up investigation against him until he learns that the woman is his boss’s daughter. Talk about sparks flying! I had so much fun writing this book, and I can’t wait for everyone to read it! And if you enjoy it, you might like to check out the whole Hard Ink series, now complete! Happy reading!

Mia found herself alone with a kinda pissed-off looking Master Kyler. He wore angry well. As in, the harshness of the set of his jaw and the tight press of his lips and the narrow cut of his eyes—they were all hot, especially coming from a Dom. But she didn’t understand it.

“Um. Hello, Sir,” she finally said when he didn’t say anything.

“Mia,” he said, his gaze raking over her. “You look absolutely stunning tonight.” His voice was like gravel, rough and strained.

“Do you want to sit and talk?” Mia asked, concern for him flooding her.

Suddenly, Kyler pinned her to the cool wall. He braced his hands on either side of her head, and he was erect against her belly. She wanted to drop into a crouch and take him into her mouth. “Do you want vulgar honesty or watered-down politeness?” he asked.

The promise of those words made her core clench with need. “Vulgar honesty.”

He nailed her with a blue-eyed stare. “I don’t want to sit and talk. I want to fuck. Hard. I want to be aggressive. Maybe I even want to be a little mean.”

Mia’s heart was suddenly a runaway train in her chest. Because, sign her up! She let out a shaky breath. “That sounds…like someone’s going to have a good night,” she managed.

Kyler dropped his head to her shoulder on a groan. He knocked his forehead against the bone there once, twice.

“Did I say the wrong thing?” she asked. Because he was totally confusing her.

“That’s the thing, Mia. I don’t know.” He lifted his gaze to hers again.

For a moment, he closed his eyes and inhaled deeply, and when he opened them, it was like he’d centered himself and made some kind of resolution. “Are you game for what I just described?” He fingered the chunky silver-and-gold choker she wore around her neck.

Heat swept over her, her body already answering, already preparing. “Yes, Sir. I am.”

He gave a tight nod and backed up a step. “Let me show you the room I have in mind.” Taking her hand, he led her down the long hallway that shot off the side of the nave. She wasn’t sure if this was still part of the church building or something else, but she didn’t have long to wonder before Kyler stopped at a door and keyed in a code.

Lights came on as the door opened, and Kyler guided her inside with his hand at the small of her back.

Just the room’s theme turned Mia on. Concrete floor. Cinder-block walls with peeling paint. Light thrown from bare light bulbs surrounded by little cages. An iron cot bed with only a white fitted sheet. Rusted metal cabinet at the side that undoubtedly held a variety of toys and supplies. It looked like a basement or a warehouse—a place where a woman in a beautiful cocktail dress had no business being. A role started taking shape in her mind.

“Do you see where my head is tonight, Mia?” Master Kyler asked, his body almost rigid with tension.

God, she was going to enjoy helping him work out whatever had him so wound up. “Yes, Sir.”

RIDE HARD is the first novel in Laura Kaye’s Raven Riders Series, a spin off from her New York Times and USA Today bestselling Hard Ink Series. Here’s our review links and buy links for the Hard Ink Series.

Laura is the New York Times and USA Today bestselling author of over twenty books in contemporary and paranormal romance and romantic suspense, including the Hard Ink and upcoming Raven Riders series. Growing up, Laura’s large extended family believed in the supernatural, and family lore involving angels, ghosts, and evil-eye curses cemented in Laura a life-long fascination with storytelling and all things paranormal. She lives in Maryland with her husband, two daughters, and cute-but-bad dog, and appreciates her view of the Chesapeake Bay every day.