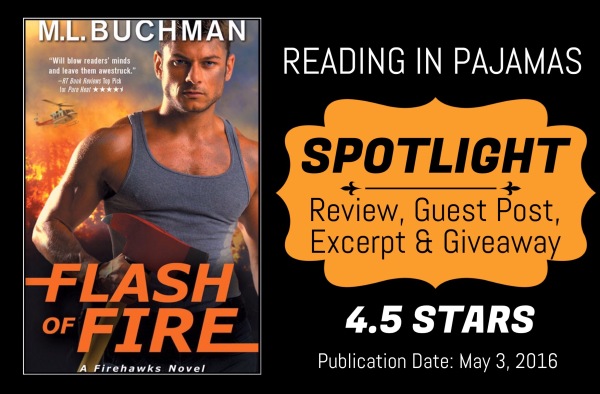 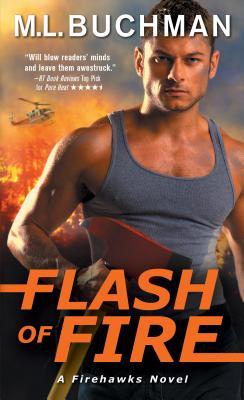 When former Army National Guard helicopter pilot Robin Harrow joins Mount Hood Aviation, she expects to fight fires for only one season. Instead, she finds herself getting deeply entrenched with one of the most elite firefighting teams in the world. And that’s before they send her on a mission that’s seriously top secret, with a flight partner who’s seriously hot.

Mickey Hamilton loves flying, firefighting, and women, in that order. But when Robin Harrow roars across his radar, his priorities go out the window. On a critical mission deep in enemy territory, their past burns away and they must face each other. Their one shot at a future demands that they first survive the present—together.

Welcome to the latest in my Firehawks world.

Flash of Fire posed an interesting challenge for me right from the first page. There is a balance in building a romance world: I want it to be big enough to be interesting and small enough to be cozy.

In Pure Heat, Full Blaze, and Hot Point I had focused on the fliers of the three big Firehawk helicopters. But I didn’t want my little Mount Hood Aviation heli-aviation wildland firefighting group to get much bigger. Another consideration was that the series name is Firehawks and I wanted to honor that with another story using a pilot of one of the converted Black Hawk helicopters.

The challenge was that I already had married couples in each of the three pilot seats: Emily Beale, Jeannie Clark, and Vern Taylor.

And then I remembered a little scene in the Night Stalkers Bring On the Dusk.

Emily hadn’t eaten breakfast and only picked at her lunch complaining of a queasy stomach from the flight.

“Either that or you’re about to have another kid,” Claudia teased her.

“You don’t want another kid?” Claudia didn’t know whether to laugh or be shocked.

“The man is so insatiable, not that I’m complaining. We ran out of protection and figured one time without wasn’t going to…”

She sighed and then rubbed her belly gently. “It’ll be alright.” She told her midriff. “You just won’t have a father.”

The goofy smile that bloomed on the woman’s face did something to Claudia.

Well, crap! I’d made poor Emily pregnant back in March, a year ago. So apologies for the 15-month pregnancy (no wonder she’s so pissed off by the time she’s too pregnant to fly in Flash of Fire).

With her seat now open, I needed someone who could fill it. Fill Emily Beale’s seat? Who was I kidding? She was the most kickass heroine I’d ever written. Well, I wasn’t the only one feeling daunted, the poor character I put in her place was plenty overwhelmed as well.

But then Robin Harrow never met a challenge she couldn’t face down…at least not until she met Mickey Hamilton, the pilot of a smaller Bell Twin-212. Which also solved my initial problem of transitioning from the big Firehawks to the smaller birds in the fleet.

I always love it when the characters take the story right out of my hands and run with it and Flash of Fire was certainly one of those.

I liked Robin from the start. She was talented and badass but you could still relate to her. I especially loved her realistic reactions to being the new girl in the group. The author writes all the characters and how they interact in a fun way that makes you believe they have faced the ongoing dangers of firefighting together for a long time. There is a lot of technical information about fighting fires and the aircraft used but it did not detract from the lovely romance. Mickey is every girls dream, not only in sexiness but in how he lets Robin be Robin. This is another exciting installment in the Firehawks series and I loved it.

Best buddies Mickey and Gordon have been jostling for attention from Vanessa, one of the other helicopter pilots. Gordon and Vanessa are assigned off to one fire, Mickey and the new pilot to another. They’re standing on the airfield about to part ways.

Mickey almost left Gordon to his own devices, but he’d be bound to screw it up. Just as he was duty bound to try to cut his friend off from any attractive woman, he also had to help him if he could.
“Gordon?”
“What?” his friend still looked a little overwhelmed.
“With Vanessa, just be yourself. Don’t gum it up with trying to be charming; it doesn’t work for you.”
“Sure it does,” he protested. “I’m a charming kind of guy.” He shot Mickey a grin.
Then he looked more carefully at Mickey’s expression and sighed. Mickey didn’t have to say a word.
“Okay, maybe not so much with the charm. Thanks, Mick,” and he turned for his helo.
Mickey caught his sleeve before he could move off, “Her name?” he nodded back over his shoulder toward the newbie.
“Robin something.”
“Like the bird?”
“Like,” that smooth female voice sounded from close behind him, “Robin Hood who will put an arrow in your ass if you say Robin Red Breast.”
Mickey turned to face her. He decided that all of his first judgments at a distance were accurate, and at this close range they were ten times more powerful—both the fine looks and the serious dose of attitude.
“Hi! Mickey Hamilton,” he held out a hand. “As long as it’s not a Firehawk you’re trying to ram up my ass, I’m fine.”
That earned a half smile; nice on the lips, not touching those crystalline pure blue eyes. Her hand was fine-fingered yet strong, like she did a lot of lifting with it. A lot. She glanced over his shoulder.
“He’s Gordon Finchley,” Mickey filled in before Gordon could speak and get a foot in the door. Helping him with Vanessa was one thing; easing his access to this pretty unknown was not going to happen. “Yeah, Finch just like a little Tweety bird. Don’t pay him any mind.”
“Hi, Gordon. Good luck in Leavenworth,” she leaned around Mickey and reached out a hand, which Gordon shook as he mumbled something unintelligible. Or perhaps it was intelligible and Mickey just couldn’t hear it.
He was struck by several things at once. It was the first time he’d actually seen Robin move, and both of his first guesses of ballerina and workout diva were equally justified. Her simple move was both lithe and powerful. Martial arts student perhaps. If so, it was a different form than his Taekwondo, something with more grace and flexibility.
Also, her lean toward Gordon had placed her so close that he could smell her. Her Nomex flightsuit was brand new and the woman wearing it smelled of clean soap and…cool ice—that impossible clarity of air when snow skiing. As if—newborn was the wrong image—newly wrought.
# # #
Gordon actually wasn’t fluttery like a Tweety bird, but he was also clearly a sweet man—a major mark against him in Robin’s book.
She knew from past experience that she tended to scare the shit out of men like him. They wanted her, but she would run over them roughshod, even on the rare occasions when she was trying not to.
This Mickey on the other hand, she had been able to feel him watching her from the moment she’d hit the line. He hadn’t shifted away as she reached past him to greet Gordon, letting her lean right into his personal space.
Guys named Mickey were supposed to look like hoodlums or something. Instead Mickey Hamilton looked like a cop…or a firefighter. The trustworthy kind, not the sneaky shit she’d always pictured slipping from her mother’s bed in the dark of the night and never coming back.
Up close she could appreciate how nicely broad his shoulders were. And he had the kind of blue eyes that could see through any fog or other BS—far away the best feature on a very handsome face. He was an inch taller than she was but looked bigger and more solid than his taller finch-friend.
Robin knew that—because her heritage was half firefighter and half truck-stop mama—she was a pushover for Mickey’s type. Now she had to ask if she wanted to be a pushover this time, or not.
She rocked back onto her heels and Gordon slipped out of her attention. Mickey didn’t fade in the slightest. He had a slow smile, a real one that showed beneath the quick grin he’d been using to tease his buddy.
He didn’t blink, squint, look away…or look down toward her chest. Mickey faced her eye to eye and offered that easy smile.
Summer is definitely looking up, she thought to herself. Most definitely. Didn’t mean she was going to make it easy for him.
“Mickey? Like the mouse?”
Gordon snorted out a laugh, slapped Mickey on the back, and headed away.
“Not Mickey Rooney either,” he offered in an unperturbed tone, showing no desire to hurry off to his aircraft.
“Not short and round?”
“Nor likely to break into a song-and-dance routine. And Mickey Mantle died about the time we both entered grade school, so I’m not him either.”
“How about Mickey Blue Eyes?”
“Well, my name is Mickey. Eyes are blue.”
“You don’t strike me as the Hugh Grant romantic comedy type.”
He shrugged noncommittally, “You the type to watch them?”
“Not so much,” Robin admitted. Astute question. “So, Mick Blue Eyes it is.”
At that he smiled and those blue eyes lit and sparkled with laughter that was only suggested by the sudden curve of his lips.

M. L. Buchman has over 35 novels and an ever-expanding flock of short stories in print. His military romantic suspense books have been named Barnes & Noble and NPR “Top 5 of the year,” Booklist “Top 10 of the Year,” and RT “Top 10 Romantic Suspense of the Year.” In addition to romantic suspense, he also writes contemporaries, thrillers, and fantasy and science fiction.

In among his career as a corporate project manager he has: rebuilt and single-handed a fifty-foot sailboat, both flown and jumped out of airplanes, designed and built two houses, and bicycled solo around the world.

He is now a full-time writer, living on the Oregon Coast with his beloved wife. He is constantly amazed at what you can do with a degree in Geophysics. You may keep up with his writing at http://www.mlbuchman.com.