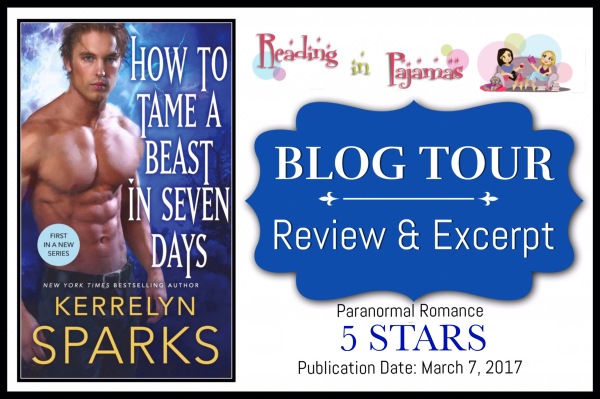 How to Tame a Beast in Seven Days by Kerrelyn Sparks 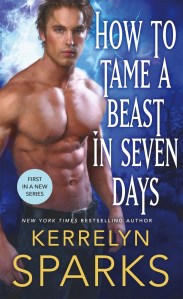 Kerrelyn Sparks’ previous series, Love at Stake, constantly hit the New York Times bestseller list and created a massive fan following for her witty vampires. With the end of her vampire series, comes the start of an extraordinary new fantasy romance series called The Embraced beginning with HOW TO TAME A BEAST IN SEVEN DAYS (St. Martin’s Paperbacks; March 7, 2017). Set in a medieval mythical world, the series explores a special group of people with powers born when the two moons of the world form an eclipse. In the start of the series we meet Luciana, who can speak to the dead, and the Beast of Benwick who can controlling lightening.

Luciana grew up on the Isle of Moon, hidden away because of her magical powers. But when her father arrives, he offers her a choice: remain on the island or return with him and marry the Beast of Benwick in order to save their legacy – and her father’s life.

Lord Leofric, the Beast of Benwick, has not been touched since he was a child. Born with the power to harness lightning, he is a danger to everyone he touches. When he meets his betrothed, he expects a loveless, lonely marriage…until he discovers she’s vastly more powerful than he realized. But is she strong enough to withstand his touch?

If they can survive, their love will alter the future of the kingdom. But will their extraordinary powers cost them everything?

Filled with romance, humor, and a beautifully imagined new world, HOW TO TAME A BEAST IN SEVEN DAYS is a fantasy in the vein of Game of Thrones with all the fun of The Princess Bride. Luciana is a vibrant leading lady that will have readers rooting for her spunk and devotion to her family while the Beast is a swoon worthy hero worth taming.

I love this new series! HOW TO TAME A BEAST IN SEVEN DAYS is the first book in Kerrelyn Sparks’ new series, The Embraced. Kerreyn Sparks created an exciting and unique new world full of magic, dragons, shifters and ghosts. It’s full of action, danger, romance and suspense. I loved the main characters and I can’t wait for the secondary characters to get their own books. I’m obssesed with this series now! I highly recommend this new series for paranormal romance lovers looking for something exciting and unique. I’m hooked!

*Review copy provided by the publisher in exchange for an honest review. 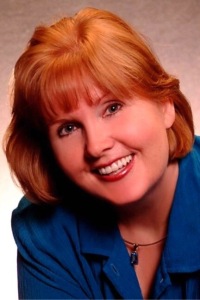 Apparently, she has issues with reality. After writing 16 books about vampires and shifters, Kerrelyn has now completely gone off the deep end and wound up on another planet.

Although Kerrelyn is best known (so far) for the Love at Stake series, which has hit as high as number 5 on the New York Times list and 22 on the USA Today list, she hopes her readers will love The Embraced as much as they did her merry band of vamps and shifters.

Kerrelyn lives with her family in the Greater Houston area of Texas. You can visit with her on Goodreads or her Facebook page, where she does a monthly contest. On Twitter, she posts as @KerrelynSparks.