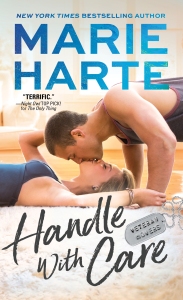 Evan Griffith has had a hell of a day…

And that was before he met the stunning, sexy woman having a meltdown.

Evan Griffith has had many careers in his life. But who knew working for his family’s moving company would hold just as much action as his stint in the Marine Corps? On an unforgettable job, Evan finds himself taken by a teenage conman and confronted by a woman wielding a knife—and promptly falls head over heels for her.

Kenzie Sykes is doing her best to raise her little brother and keep him out of jail—all while dealing with her own broken heart that just hasn’t healed. She doesn’t have time for romance. He’s not asking… Until he is, and she finds herself saying yes.

I enjoyed this installment in the Veteran Movers series. Evan’s story lived up to my expectations and then some. Kenzie and her crew were as funny and crazy as Evan’s, fitting both of their lives together like a puzzle. That opening scene was a hoot! Granted Evan could sometimes come across as too good to be true – and Kenzie edged close to my “she’s fighting the relationship too much” line, but neither circumstances made me groan. Another thing I liked about this story, is Kenzie’s younger brother was a part of the budding romance. I loved how Evan not only fell in love with Kenzie but grew to love her brother too. It was natural and never seemed forced. This is a sexy hot romance full of laughter and warm-fuzzies. 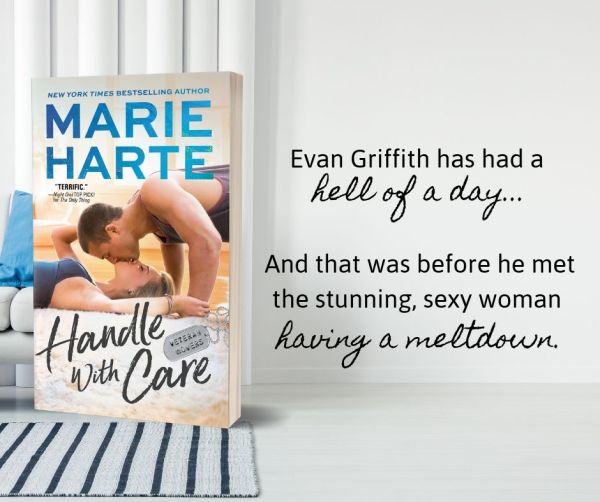 Funny, he’d said. Evan had been set up. Again. Daniel Sykes needed some discipline, something the Corps, or a foot up his butt, might just provide. Then again, should Evan be upset at another opportunity to see Kenzie up close?

Damn, but even angry she turned him on. Yeah, that was it. He wanted her. Physical desire. That he understood. And if he ignored the quickening of his heart and the need to sigh just looking at her, he’d believe his own bullshit. Because falling for a woman he didn’t even know made no sense. And Evan was nothing if not rational.

“What are you doing here?” she asked, biting out each word.

“I’m supposed to meet your brother to discuss financial matters. He had a legitimate question about tax penalties, and since I was already in the area, I told him I’d meet him.”

“No. I am having some issues with my books, but I’m not sure why Rachel’s moving guy is qualified to help us.”

Evan smiled. “I’m an accountant. I was, I mean. Well, I still am. I’m just working for myself now.”

“So much suspicion.” He grinned, not telling her how adorable she looked in her pique. Women didn’t like hearing that they were cute when trying to appear serious. “I wasn’t fired for any wrongdoing. I left the firm because I couldn’t handle the hours. But I’m still consulting for them, and I have a few clients staying with me who left Peterman & Campbell Accounting when I did.”

She blinked. “I know that firm. One of my clients uses them. They’re big money.”

“Yep.” Evan wanted to stroke her cheek, to see if she felt as soft as she looked. So he tucked his hands in his pockets.

“What was with lying to Rob about your clients using me? Or me being overbooked?”

He shrugged. “I know Rob. He’s competitive. The thought of him not getting to use your services because you don’t have time for him would annoy the crap out of him. Plus it never hurts to make people think you’re more than you are. Perception is everything, and before you know it, you will be overbooked.”

“Oh.” She gave him a tentative smile. “Thanks.”

“Mind if I grab a coffee and wait with you for your brother? It’s getting crowded in here.”

She nodded, her gaze thoughtful.

Evan picked up a coffee and a few pastries and returned to Kenzie. “How about some sweets as a peace offering? I had no idea I was interrupting a meeting.”

She accepted an apricot Danish. “Thanks. It’s not your fault I couldn’t snare Rob Talon on my own.”

He didn’t know about that. Rob had seemed pretty smitten when Evan had seen the pair sitting together.

“How do you know him anyway?” Kenzie asked.

“I knew his sister from a long time ago. She and I dated briefly in college. Rob is a good guy, and he and I became friends after Kayla and I broke up.”

“She is. But I was the problem.” I was too boring for Kayla. And I really hate that word. “She wanted to see the world, and I had responsibilities.” He sipped his coffee, remembering the past and wondering where the time had gone. “Well, actually she wanted to go to India for some technology conference, and I wanted to go to Miami for a wild spring break. We parted ways after I joined the Marine Corps and she moved to Bangalore.”

“You were a Marine?”

“Am a Marine.” He smiled with pride. “You’re never an ex. You become a ‘prior’ or ‘former’ Marine. It’s always with you.” Even though he hadn’t enjoyed many of the aspects of the military, he missed the camaraderie, which explained why he loved working with the gang at Vets on the Go! It felt like a mini-Corps of likeminded individuals.

“So if you don’t mind me asking, why are you moving furniture for a living? Because you burned out doing accounting?” She sounded disbelieving.

He couldn’t blame her. “Actually, I’m a partner in our moving business. My cousins and I own Vets on the Go!, and one of our guys is out due to a broken arm. So I’m helping out until he’s back. But to be honest, it’s been enjoyable using my muscles more than my brains for a while. I got tired working eighty-hour weeks for Peterman & Campbell.”

Her eyes softened. “That makes sense. I love my job, but I get tired too. I worked all weekend in between cleaning my house and running errands.” She sighed. “And today was a bust.”

“Sorry to hear that. I’ll make sure Rob calls you back since I interrupted you.”

“No, please don’t. I can handle my business myself.”

He sensed a little bit of tension there, but he understood the need for independence. “No problem. At least finish the Danish.”

She shoved half the pastry in her mouth and grinned at him. “Happy now?” she asked, her mouth full, and he laughed.

“You know, I can see where your brother gets that attitude.”

She managed to swallow the ball of dough and groaned. “Now I should be apologizing to you. I can’t believe he tricked you into coming here.”

“So you’re not having a problem with your taxes?”

“Yes, but—” The buzz of her phone interrupted her. She read a text and blinked. “Daniel just told me he’s on his way here to meet with you and not to be freaked out if I see you because you’re not stalking me, you’re doing him a favor.”

“Mostly in abbreviations and emojis, but I understand teen-speak.”

Evan laughed. “Better you than me. I couldn’t even figure out how to change my name back.”

“What did he change your name to?”

She couldn’t stifle her mirth, and he saw it.

Award-winning author Marie Harte has been writing professionally since 2005. She’s both a NY Times and USA Today bestselling author and has written over 100 books and counting. Marie writes books with heat, humor, and character.

She writes independently and for several publishers, to include Sourcebooks and Samhain. Though currently writing contemporary romance, she also writes paranormal and romantic suspense.

Before turning to writing full-time, she earned a B.A. in English from Pennsylvania State University and spent several years in the United States Marine Corps as a communications officer.

Marie currently lives in Central Oregon with her family. There’s nothing she likes more than finding a good book to read and a great cup of coffee to drink.