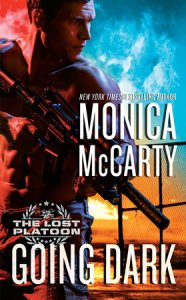 Like Rome’s Lost Legion, a SEAL platoon goes on a mission and vanishes without a trace.

After walking into a trap on a covert op in Russia, the men from top secret SEAL Team Nine are presumed dead. Not knowing whom they can trust, and with war hanging in the balance, the survivors must go dark and scatter around the globe.

Marine ecologist Annie Henderson joins her new boyfriend on a trip to the Western Isles of Scotland to protest a hazardous offshore drilling venture. When she realizes that she may be swept up in something far more dangerous than she’d intended, there is only one man she can turn to. . . .

She and the mysterious but sexy dive boat captain haven’t exactly gotten off to the best start, but something about his quiet confidence makes her think that he’s the kind of man she can depend on. Because he’s gruff and guarded, she can tell Dan Warren has secrets. But she could never imagine how high the stakes are for him to keep his cover, even as he risks everything to protect her. . . .

This story is fast paced and exciting. I liked both characters instantly, even though I didn’t have a lot in common with either one. I liked that they were almost polar opposites, and yet respected each other’s views with an open mind. Their disagreements never got to the “that’s enough already” stage for me, and I liked that. The romance part was smoking hot and blended well into the story, smoothly ebbing and flowing with the danger all around them. I can’t wait to read the next installment to find out what happens with them and the rest of the lost platoon! I loved it. Monica McCarty is the bestselling author of The Arrow, The Raider, The Hunter, the Highlander trilogy, the Campbell trilogy, and more. Her interest in the Scottish clan system began in the most unlikely of places: a comparative legal history course at Stanford Law School. After a short but enjoyable stint as an attorney, she realized that her career as a lawyer paired with her husband’s transitory life as a professional baseball player was not the best match. So she traded in her legal briefs for Scottish historical romances with sexy alpha heroes. She now lives in the San Francisco Bay Area with her husband and their two children.