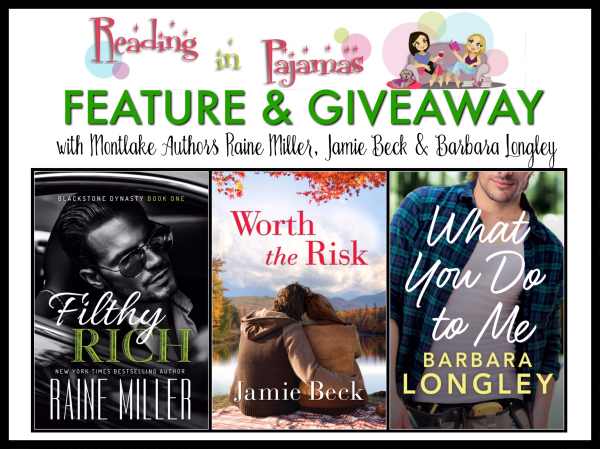 Get To Know Montlake Romance Heroes

This month, Montlake Romance releases stories from Raine Miller, Jamie Beck and Barbara Longley. While all three of the heroes featured in the contemporary romances are swoonworthy, today we are taking a look at each one (from the authors’ POV) to see what makes these men so special.

Read on to get to know Raine’s billionaire hero Caleb Blackstone from Filthy Rich, Jamie’s grief stricken hero Jackson St. James from Worth the Risk, and Barbara’s sexy handyman extraordinaire Sam Haney from What You Do To Me.

What are your hero’s greatest strengths? Weaknesses?

Barbara Longley – Sam’s greatest strength is his capacity to love and his total loyalty and devotion to those he holds most dear—his family. His greatest weakness is his fear of loss, which is why he’s closed his heart off to anything remotely serious with women, especially if a woman might turn out to be his one-and-only.

Jamie Beck – Jackson is a generous, deeply committed, and loyal person who is always willing to take the time to help others without being asked. At the same time, he didn’t cope well with a series of devastating losses, turning to alcohol instead of friends and family. He’s been in denial about his problem until the intervention that is the catalyst for his story.

Raine Miller – Caleb’s strength is his sense of family and his integrity. His weakness is insecurity about being loved for himself.

What is your hero’s best physical attribute?

Raine Miller – His eyes. Dark blue with gold rings around them.

Jamie Beck – Haven’t you heard? His smile! According to Gabby, “Anyone who ever said Tom Cruise had the world’s greatest smile had never seen Jackson St. James smile.” He’s also got great hair.

Barbara Longley – Sam’s shaggy, man-in-need-of-woman-to-care-for-him good looks are on par with Chris Hemsworth’s, Jude Law’s and David Beckham’s appeal . . . or maybe Sam is a combination of the three.

Is your hero a commitment-phobe, ‘all in’, or something in between?

Jamie Beck – For most of his life, Jackson had been an “all in” guy who looked forward to love and kids. Commitment was never a problem, but then a series of disappointments robbed him of family and faith in love. His core belief is still in tact, but it’s buried pretty deep at the opening of the story.

Raine Miller – Oh, Caleb is definitely an ALL IN kind of guy. He speaks to her and knows that there is something very special about this girl. He can’t stop thinking about her. He’s hooked.

Barbara Longley – I’m pretty sure if you looked up commitment-phobe on Wikipedia, Sam Haney’s name would come up. Sam’s parents died in a single-engine plane crash on his fifteenth birthday. After that, he pretty much closed up shop as far as his heart is concerned. He can’t bear the thought of caring that much for one woman, only to go through the devastation of loss again. So, he just doesn’t do relationships.

What is the most romantic scene in the book?

Jamie Beck – I suppose that depends on a person’s view of romance. To me, romance is made up a dozens of thoughtful gestures that reveal the depth of your lover’s feelings, in which case there are many to pick from. But if we are talking about physical intimacy, I think my favorite is the second time they make love. It starts off a little rough and hot, and then afterwards, Jackson is very sweet and surprises her. I don’t like to give too much away, because it will spoil it for the reader.

Raine Miller – When Caleb calls Brooke to tell her he wants to see her again before he leaves for Abu Dubai and she invites him to come to Blackstone Island for a few days. I like it because they are both vulnerable emotionally, but they both risking putting themselves ‘out-there’ for the sake of love at the same time.

Barbara Longley – There are a bunch, but my favorite is when Sam takes care of a sliver in Haley’s hand, which is also when they share their first kiss. What he does right before putting her BAND-AID on just melted my heart. I don’t want to spoil the moment for you, so that’s all I’m going to say. 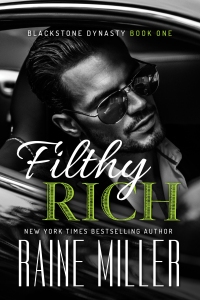 Billionaire Caleb Blackstone lives in the glamorous world of wealth and success, with every material luxury. But the moment he sees Brooke Casterley, none of that matters. Caleb is filled with a raw, undeniable need that he can’t ignore…for a girl who is so completely different from everything and everyone he’s ever known.

Only Brooke isn’t looking for love. She knows all too well just how much damage the wrong guy can do. Still, what sane, broke British girl can resist the charms of an incredibly sexy, chivalrous billionaire? What starts as flirtation quickly turns into all-consuming passion. Nothing could have prepared her for the searing heat of Caleb’s touch—or just how much she craves him.

Their whirlwind romance is the stuff of high-society fantasy—but for every moment of pleasure, there is a cost. Past mistakes and tragedy shadow them both…and falling for him might be the kind of trouble she can’t afford.

Worth the Risk by Jamie Beck

When Jackson St. James decided that six weeks in Vermont’s Green Mountains would help him get his life together, he didn’t anticipate replacing his craving for whiskey with a craving for his alluring new landlord, Gabby. Now, instead of prioritizing his sobriety and the resolution of the lawsuit threatening his business, he’s making excuses to spend time with the spunky young landscaper whose candor is more than a little addictive.

Gabby Bouchard refuses to let her pill-popping mother and unreliable baby daddy turn her into a cynic, so she doesn’t fight her attraction to her enigmatic new tenant. Although Jackson’s smile rarely reaches his eyes, his generosity and dependability make her willing to overlook his demons. But once she convinces him to give in to temptation, Gabby’s jealous ex threatens to disrupt the life she has built for herself and her son.

With so much at stake, Gabby and Jackson must decide if love is worth the risk. 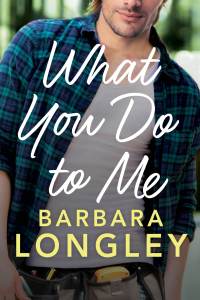 What You Do To Me by Barbara Longley

Whether it’s repairing a home or taking care of clients’ other needs, Twin Cities handyman Sam Haney is in demand from his mostly female clientele. Despite Sam’s lothario reputation, love isn’t part of his portfolio. He’s built a lot of walls in his time, but the one that’s surrounded his heart ever since the death of his parents is his most solid yet.

Haley Cooper has had enough heartache for a lifetime. Her high school sweetheart up and moved to Indonesia—alone—just two weeks before their wedding. Her mother thinks it’s time for Haley to move on and contracts Sam to work on Haley’s wreck of a house—and anything else, if he’s got the notion.

Sparks fly and passion ignites. But Haley isn’t into Sam’s love-’em-and-leave-’em act. She wants something more. Fixing a house is one thing, but for this handyman, building a relationship will need a whole different set of skills.