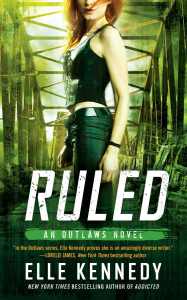 The latest novel in the series with the “sexiest, baddest, hottest”* outlaws around, from the New York Times bestselling author of Claimed.

In the latest novel in the series with the “sexiest, baddest, hottest” outlaws around, one woman must choose between the two men who want to claim her…

Despite his magnetic personality, Rylan can’t seem to seduce Reese, the deadly leader of their town of outlaws. Winning her over is a welcome challenge, but her indifference isn’t the only thing standing in his way. If he wants Reese, Rylan must also win over Sloan, her stoic protector…

Sloan has always loved Reese, but their painful past has stolen his chances of a future with her. Rylan’s interest in Reese only intensifies the tension—until Sloan begins to wonder if the reckless man might be the one person who can bridge the distance…

The last time Reese fell for the wrong man, she had no choice but to kill him. Now, she desperately wants to take what both Rylan and Sloan are offering. But if she makes the wrong call again, she risks losing them both.

I loved it! RULED is a scorching hot romantic suspense set in an apocalyptic world that kept me flipping the pages. It had not one, but two hot alpha heroes and a heroine I rooted for. The story took some twists and turns that surprised me. I couldn’t choose  between the two heroes and fell in love with them both. I just love this series. Elle Kennedy has a writing style that draws the reader into the story. Anytime I pick up one of her books I know I’m going to get swept up in a good story. RULED is part of Elle Kennedy’s Outlaw Series, but it can be read as a standalone. It’s set in apocalyptic world but I think romance readers that do not normally read this genre would still enjoy it. It’s a great romance and I highly recommend it.

Reese curled both hands around the cracked ceramic mug and breathed in the mint-flavored steam rising from the rim. It heated the tip of her nose and brought a much-needed rush of warmth. She’d felt chilled to the bone all morning, and it had nothing to do with the dipping temperature outside.
“So the raid was a success?” The very pregnant Bethany waddled over to the small sofa under the window.
Reese nodded. “We’ve got enough guns and ammo to start a war.”
Bethany’s eyebrows flicked up. “Or a revolution.”
“Same thing.”
“Is it?”
She didn’t even know anymore. Reese lifted the mug to her lips and took a small sip, all the while doing her best to avoid looking at Bethany’s bulging stomach. Seeing it reminded her of her own losses, the choice that had been stolen from her. And it reminded her of Arch, the ginger-haired giant who was never going to see his baby come into this world.
Arch had been a good man, an exceptional soldier. Everyone in town was still grieving for him, but none more so than his woman, whose brown eyes fixed on Reese now.
“What’s going on?” Bethany stroked her belly in absent- minded gestures. “You look worried.”
Reese set down her mug. “Nah, I’m fine.”
“Bullshit. Something’s up.”
She hesitated, because she didn’t confide in many people. Sloan was the one she went to when she was feeling vulnerable. Sometimes Lennox. Tamara. But for all the others, she put on a strong front. She was their leader, which meant they weren’t allowed to see her worrying, or vacillating, or drowning in self-doubt.
She’d known Bethany a long time, though. Shit, it had been almost eight years now. The two women were seventeen when they’d first crossed paths. Where the hell did the time go?
“I did something stupid last night,” she found herself confessing.
“Yeah? What’d you do?”
“Rylan.”
Bethany snorted. “Ah. So he finally charmed his way into your bed?”
The humor in Bethany’s eyes was such a welcome sight that Reese’s heart squeezed. In the two months since Arch’s death, Bethany’s expressions had alternated between completely vacant and raw with grief.
“How was it?” Bethany pressed.
How was it? Reese couldn’t even begin to answer that. Hell, she wasn’t sure there were actual words in the English language that could describe what went down between the two of them last night.
No, the three of them.
Her wrists were still sore from Sloan’s punishing grip. He’d held her, restrained her so she was at Rylan’s mercy. Sloan’s mercy. The memory sent a rush of desire to her core, which only confused her body. She didn’t even know who she’d been coming for last night. Rylan? Or Sloan? Or both?
What she did know was that she’d done a very bad thing. A dangerous thing.
Rylan had been as wild and addictive as she’d suspected he’d be, but . . . she’d crossed a line with Sloan. She’d stared into his eyes while she was sobbing in release. She’d clung to him while Rylan screwed her hard enough to make her see stars. She’d threatened their friendship, and for what? A few orgasms?
It wasn’t fair to Sloan. She knew damn well that he wanted her—she’d always known—yet she’d selfishly asked him to be there last night, even though it must have been torture for him.
What kind of friend did that make her?
“You’re worrying me again.”
Bethany’s quiet voice jolted her from her thoughts. “I’m sorry,” Reese murmured. She picked up her mug and took another long sip. “My head is foggy this morning.”
“Good sex will do that to you.”

A USA Today bestselling author, Elle Kennedy grew up in the suburbs of Toronto, Ontario, and holds a B.A. in English from York University. From an early age, she knew she wanted to be a writer, and actively began pursuing that dream when she was a teenager.