HEART OF A SEAL (Hearts of Valor, Book 1) by Dixie Lee Brown 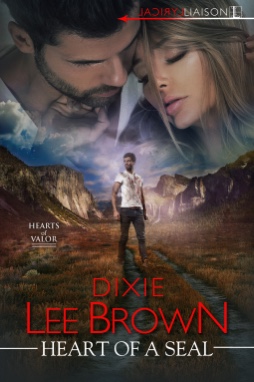 They’re brothers in arms, Navy SEALS risking their lives for their country . . . and the women they love.

This is Luke Harding’s story.

Six months in a desert hellhole taught Navy SEAL Luke Harding things he never wanted to learn about life and death. Only tender memories of the beautiful brunette he met a few weeks before his deployment helped get him through the torturous days and nights. Back in the States after a perilous rescue, physically and emotionally damaged, Luke’s about to plunge into a new kind of war. In a seemingly bucolic Idaho town, Sally Duncan faces real—and unpredictable—danger.

All Sally ever wanted was a safe place to raise her nine-year-old daughter. Her identity hidden behind a façade of secrets and lies, can she trust Luke—a man she barely knows—with the truth? Even as they give in to long-denied passion, a killer with a personal vendetta is setting an ambush that will leave them praying for a miracle and fighting for the future they may not live to see.

I had so much fun reading this novel. The heart-pounding action and suspense kept me on the edge of my seat. The sizzling romance between Luke and Sally ratcheted it up another notch. A few aspects seemed a bit improbable, but it made for an exciting read. Luke and Sally were both likeable, as was the people around them. I like when the camaraderie flows, so that you feel a part of it. Loved it and can’t wait to read the next one.

DIXIE LEE BROWN lives and writes in Central Oregon, inspired by what she believes is the most gorgeous scenery anywhere. She resides with two dogs and a cat, who make sure she never takes herself too seriously. When she’s not writing, she enjoys reading, movies, and trips to the beach.

RESCUED BY THE RANGER by Dixie Lee Brown

Protecting those in trouble is what Army Ranger Garrett Harding does best. But after helping a feisty redhead toss a couple of losers from her Idaho bar, the woman is anything but grateful for his assistance—in fact, she seems to know him. Worse, she almost certainly hates him.

The only thing Rachel Maguire wants is to send this smart-mouthed, muscled military man packing. She knows Garrett has his own reasons for staying, so when he offers Rachel a deal—two days to prove his worth or he leaves—she reluctantly agrees. Despite wanting to loathe him, Rachel finds herself drawn to his quiet confidence…and the way he fills out a t-shirt.

But when Rachel receives a phone call from the past, everything changes. The stalker who destroyed her life ten years ago is closing in once more. Refusing to put anyone else in harm’s way, Rachel hits the road hoping to lure danger away from those she loves. But Garrett won’t leave this sexy spitfire to face her stalker alone. He’ll do anything to protect her. Even if it means risking his life—and his heart.

What a thrill to stop by today and introduce one of my characters from my newly released romantic suspense novel. It’s my pleasure to present the:

Rescued by the Ranger
Heroine Profile

​Eyes:​ Green with specks of gold

​Family:​ Alcoholic and promiscuous mother she hasn’t seen in years.

​Occupation:​ Works at the hunting lodge doing various tasks; during the summer months she runs the Cougar Ridge Watering Hole, the resort’s bar.

​Weakness: ​She has adopted the residents of the lodge and surrounding area as her ​​“family”, but the closer she gets to them, the more she knows it’s too ​​risky to continue hiding from her past in their midst.

​Strength:​ Brave, loyal, and a self-trained marksman, she’d do anything to keep ​​her “family” from being hurt.

​Closest Friends:​ 1.) Jonathan Reyes, another lodge employee with obvious secrets of his ​​own. They have an unspoken agreement to respect each other’s ​​privacy.

2.) Sally Duncan lives in a nearby town. She knows the secrets ​​that haunt Rachel. Thus Sally is the only one Rachel can turn to ​​when she needs help.

​Struggles With: ​Unforgiveness—when a sexy stranger shows up at her bar and
​​helps her toss out a couple of trouble-makers, Rachel is instantly ​​attracted to him…until she learns who he is—the man she hates with ​​a passion due to the heartache she believes he caused one of her friends. ​​Forgiveness is not an option.

​Best Quality:​ Protective of her friends.

​Quote:​ “The dog can stay…but no Harding will ever be welcome here.”

A faint whine from the shotgun seat jerked Garrett’s attention back to the narrow road hugging the side of a steep mountain in the middle-of-fucking-nowhere, Idaho. Gravel crunched beneath the tires as he came close to the drop-off on his right, and he immediately guided the Jeep closer to the white line down the middle of the chipped and broken asphalt. Clearly, either he was lost, or naming this strip of pavement a state highway was someone’s idea of a joke. Whatever the case, this wouldn’t be the best place to lose his focus. It was a damn-good thing Cowboy was watching out for him, as usual.

Garrett scratched beneath the chin of the German shepherd in the seat beside him, and the dog gave another worried whimper. With no words at his disposal, Cowboy still managed to convey his opinion about the last-minute road trip they’d embarked on late last night, and at this point, Garrett was tempted to agree with him.

“Relax, boy.” Garrett cocked his head toward the navigation system resting on the dash. “Matilda thinks we’re almost there, and she hasn’t gotten us lost in a long time.”

That earned him another whine and a hopeful thump of the dog’s tail. Cowboy’s tongue lolled from the side of his open mouth as he stuck his head out of the window and resumed his panting.

Maybe Garrett should have listened to his little brother Luke. Cowboy might have been better off staying with his father at the senator’s residence in Sacramento. But Garrett had balked when Luke brought it up. The dog belonged with him. Constant companions for the past two years—watching each other’s backs, eating together, sleeping together, flushing out Sunni militants together—Cowboy was the closest thing to a guardian angel Garrett would ever see.

When they’d both been injured in a firefight outside the Iraqi city of Fallujah, Cowboy had not only led them out of the ambush, but also stood guard over him and the other surviving member of their unit until help had arrived in the early hours of the morning. At the field hospital, Garrett had insisted the dog receive the best treatment available and, a couple of weeks later, had pulled out all the stops to secure the necessary approval to bring him home.

He knew what it was like to have someone you love suddenly and permanently disappear. And it wasn’t happening to Cowboy. Not if Garrett could help it. He hadn’t left the dog behind in Iraq, and he wasn’t going to leave him now.

Ten (10) digital downloads of RESCUED BY THE RANGER

DIXIE LEE BROWN lives and writes in Central Oregon, inspired by what she believes is the most gorgeous scenery anywhere. She resides with two dogs and a cat, who make sure she never takes herself too seriously. When she’s not writing, she enjoys reading, movies, and trips to the beach. 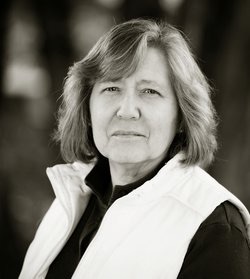