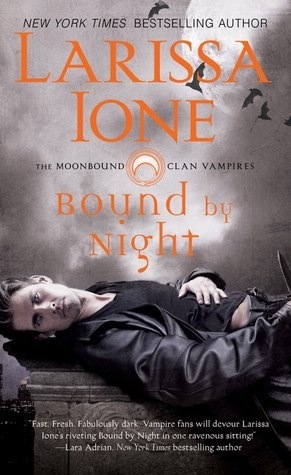 Larissa Ione’s bestselling Demonica series has captivated fans with its sensual blend of dark passion and demonic fury. Now she takes you to another intoxicating world—where a dangerous clan of wild vampires rules the night . . .

A WOMAN OUT FOR BLOOD
Nicole Martin was only eight years old when the vampire slaves rose up in rebellion and killed her family. Now she devotes her life to finding a vaccine against vampirism, hoping to wipe out her memories—along with every bloodsucker on the planet. But there’s one thing she cannot destroy: her searing, undeniable attraction for the one man she should hate and fear the most . . .

A VAMPIRE OUT FOR REVENGE
A member of the renegade vampire MoonBound Clan, Riker is haunted by demons of his own. When he recognizes Nicole and remembers how her family enslaved his loved ones, his heart burns for vengeance. But when he kidnaps Nicole and holds her in a secret lair, his mortal enemy becomes his soul obsession, his greatest temptation, and, perhaps, his only salvation—a hot-blooded lover who could heal him with her touch . . . or bury him forever.

I loved this book! I’m a fan of Larissa Ione’s Demonica series and was excited when I saw she was releasing a new vampire series. She created a unique new world where vampires and humans are at war with each other and humans have enslaved vampires. I was completely pulled into this story. Riker, a sexy vampire, hates Nicole’s family and when he captures Nicole, the human CEO of a company that experiments and trains vampire slaves, he doesn’t want to be attracted to her and he definitely doesn’t want her to change is perception of her. They both have to overcome a lot of prejudices and misconceptions. There chemistry and passion can not be denied and they end up fighting for each other. I loved both the main characters and the secondary characters in this book. Larissa Ione creates characters that really leave an impression on the reader and left me wanting additional stories for the secondary characters. This was a unique, sexy and hot paranormal romance. I can not wait for the next book in this series and I highly recommend this book for paranormal romance lovers!

*Advanced review copy provided by NetGalley in exchange for an honest review.