SAY NO TO THE DUKE: The Wildes of Lindow Castle, Book 4 by Eloisa James

Could she possibly refuse a duke’s hand—in favor of a sardonic, sinful rake?

Lady Betsy Wilde’s first season was triumphant by any measure, and a duke has proposed—but before marriage, she longs for one last adventure.

No gentleman would agree to her scandalous plan—but Lord Jeremy Roden is no gentleman. He offers a wager. If she wins a billiards game, he’ll provide the breeches.

If he wins…she is his, for one wild night.

But what happens when Jeremy realizes that one night will never be enough? In the most important battle of his life, he’ll have to convince Betsy to say no to the duke. 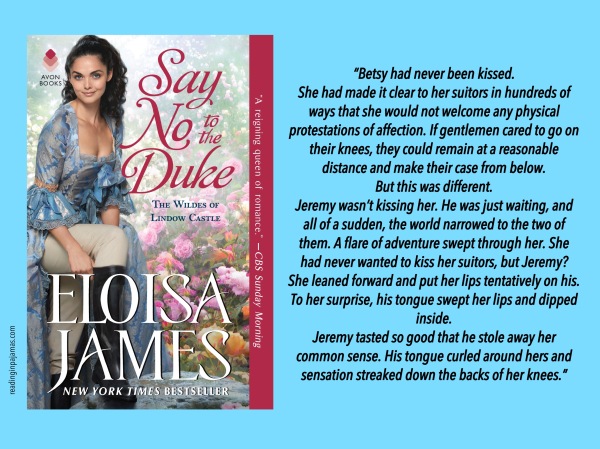 They moved toward each other as if they were following the steps of a very slow, very grand country dance. One that was danced by kings and queens and countryfolk alike.
When they were beside each other, she squared her shoulders and met his eyes. “I decided to come to you. I hope that is all right.”
“I do believe that you are the bravest woman I’ve ever met,” he replied.
He couldn’t have said anything better; Betsy felt herself begin to glow. “I haven’t been brave to this point, but I have made up my mind to change. I outlawed being nervous, but now I need to outlaw being afraid.” She hesitated. “I have chosen courage, and now I choose happiness.”
“I love you as you are,” he whispered, and then his mouth came down on hers.
Her breath caught in her throat because their tongues met as if they kissed every day, every night. He tasted right, which sent a shiver through her whole body, and pushed her against him gently, the way a pebble might roll up a beach when the tide comes in.
One doesn’t fight the tide.

Paperback Copy of SAY NO TO THE DUKE by Eloisa James

Winner will be selected Monday (7/8) by 6PM EST. Paperback provided by Avon. 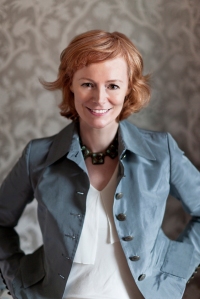 Eloisa James is a USA Today and New York Times bestselling author and professor of English literature, who lives with her family in New York, but can sometimes be found in Paris or Italy. She is the mother of two and, in a particularly delicious irony for a romance writer, is married to a genuine Italian knight. Visit her at http://www.eloisajames.com.