Midnight and dawn, Elena’s wings are unique among angelkind…and now they’re failing. The first mortal to be turned into an immortal in angelic memory, she’s regressing. Becoming more and more human. Easier to hurt. Easier to kill.

Elena and Raphael must unearth the reason for the regression before it’s too late and Elena falls out of the sky. Yet even as they fight a furious battle for Elena’s very survival, violent forces are gathering in New York and across the world.

In China, the Archangel Favashi is showing the first signs of madness. In New York, a mysterious sinkhole filled with lava swallows a man whole. In Africa, torrential monsoon rains flood rolling deserts. And in Elena’s mind whispers a haunting voice that isn’t her own.

This time, survival may not be possible…not even for the consort of an archangel.

Illium turned in a direction that would take them to the Catskills if they kept on going.
Sweeping closer to him, she said, “You just want to fly?”
Hair rippling in the quiet but cutting wind, he twisted down in a complicated fall before flying back up to her side. She laughed at his showing off. That was Illium. An angel of violent power who had a heart that might almost be mortal. And, these days, she could appreciate his tricks again. Not a single angel in the city had been ready to witness his acrobatics in the immediate aftermath of the day he’d crashed out of the sky.
Elena would never forget her screaming fear.
To his credit, Illium had flown with absolute discretion for months, letting the memory dull and fade.
When he returned to her side today, his face was flushed, the gold of his eyes rich. “Sky’s too beautiful to shut ourselves away in a club.”
“Just don’t forget I’m not as fast as you. Also, I’m currently lame.”
Illium lifted one cupped hand close to his shoulder, the other moving back and forth . . . and she realized he was playing a tiny violin in response to her morose tone.
“Crossbow, Bluebell.” Narrowed eyes. “Remember the crossbow.”
He dived, his wicked laughter floating up on the night air. Lips twitching, Elena continued to glide, letting the air currents sweep her along with cold but gentle hands. Illium, meanwhile, flew circles around her—but he never went far, always close enough to halt her descent should she tumble.
She landed a number of times to rest her wings, once in an isolated park whispering and dark. A luminescent insect appeared then disappeared from sight before she could truly see it, an earthbound star. The ghostly owl sitting on a tree branch watched her with eyes even more luminous.
A sigh deep in her mind, an old, old presence restless in Sleep.
The hairs rose on her arms.
Then Illium shot them both up into the sky again, and together, they flew far beyond the diamond-bright skyline of the city and over the sleeping homes of ordinary people who lived in a world of vampires and angels, blood and immortality.
Another rest stop for Elena.
Another throb of pain from the cut on her forearm.
Another watchful owl, this one landing on Illium’s shoulder without his knowledge. Ashwini had told her not to be afraid of the owls, so Elena ignored the goose bumps and said, Hello, with her mind. A good night to fly.
A vein began to throb at her temple.
The answer came a long time later, after they were in the air again, the glow of the sinkhole visible from the distance.
It has been an eon since I flew.

This book was epic! I couldn’t put it down! ARCHANGEL’S PROPHECY is the is the eleventh book in Nalini Singh’s Guild Hunter series. Each book in this paranormal romance series can be read as a standalone, but I recommend reading them in order to fully enjoy the series storyline. Raphael and Elena’s story kept me glued to the pages and gave me all the feels. It has a cliffhanger but not the kind of cliffhanger that makes wants to throw my book against the wall. I just can’t wait to for the next book. Nalini Singh always creates stories with unique worlds I can get lost in for a while. I highly recommend this series for readers looking for an addicting paranormal romance series. 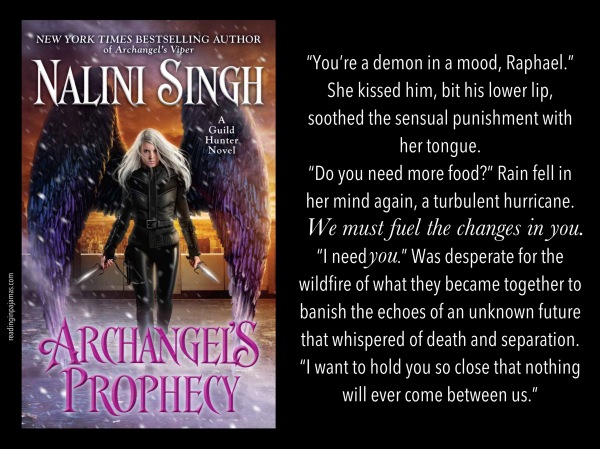 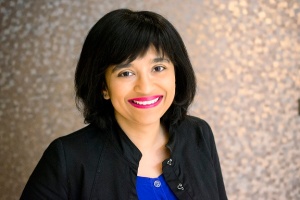 I’ve been writing as long as I can remember and all of my stories always held a thread of romance (even when I was writing about a prince who could shoot lasers out of his eyes). I love creating unique characters, love giving them happy endings and I even love the voices in my head. There’s no other job I would rather be doing. In September 2002, when I got the call that Silhouette Desire wanted to buy my first book, Desert Warrior, it was a dream come true. I hope to continue living the dream until I keel over of old age on my keyboard.

I was born in Fiji and raised in New Zealand. I also spent three years living and working in Japan, during which time I took the chance to travel around Asia. I’m back in New Zealand now, but I’m always plotting new trips. If you’d like to see some of my travel snapshots, have a look at the Travel Diary page (updated frequently).

So far, I’ve worked as a lawyer, a librarian, a candy factory general hand, a bank temp and an English teacher and not necessarily in that order. Some might call that inconsistency but I call it grist for the writer’s mill.