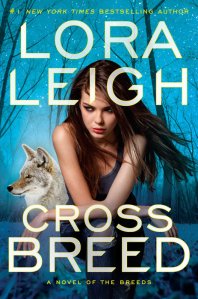 Fans of #1 New York Times bestselling author Lora Leigh’s scorching Breed series first met Cassie as a little girl in Elizabeth’s Wolf. Now Cassie has finally come into her own as a young woman, and she’s about to discover the one she is destined for—but it is unclear whether her fate is to be mated for life, or marked for death…

The Breeds are humans altered before conception with the DNA of the predators of Earth. But although they all carry the genetic material of beasts within them, Cassandra Sinclair stands apart. A unique mix of wolf, coyote and human, she is revered by many—but preyed upon by others. She is fiercely protected by her community…but no one manages to stop her when she slips away one day to offer her body in exchange for her sister’s safety.

The man she succumbs to surprises her by unleashing her inner animal in ways she never dreamed possible—and provokes her deep, furious rage. To Cassie’s shock, he is the mate she has long awaited. She may never be able to forgive his deception. Still, as dangerous enemies track her, and as the threat of all-out war between Breeds and the humans who despise them hovers in the air, they must join forces and hold fast to each other.

This book was everything I wanted it be as a fan of the series! If you’re a fan, you love Cassie and want her to have the perfect hero and I think she got that hero. I’m not going to mention who that it is because the book description doesn’t say who he is, but I will say I loved him. CROSS BREED was full of passion, danger, mystery and romance. I think this is my new favorite in the series. Cassie’s story begins in ELIZABETH’S WOLF as a little girl. Fans of The Breed series have read about Cassie growing up throughout the series and have been waiting for her story now that she’s grown up. The Breed series is about genetically engineered human/ animals that were raised in labs and it is set in the future. If you’re new to this series, the beginning of the series is being re-released so you can start at the beginning. I recommend reading them in order to follow the series storyline, but each book can be read as a standalone. The Breed series is scorching hot, suspenseful, and emotional. I highly recommend this series for paranormal lovers. You’ll want to devour them all. 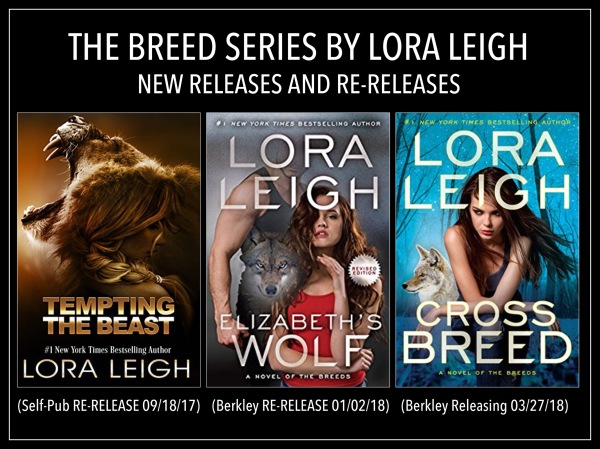 THE BREED SERIES BY LORA LEIGH – NEW RELEASES AND RE-RELEASES
Lora Leigh is re-releasing some of the BREED SERIES that have been unavailable. Here’s a list of what’s releasing and available. Full reading order is below. It’s a paranormal romance/ erotica series.

Lora Leigh dreams in bright, vivid images of the characters’ intent on taking over her writing life, and fights a constant battle to put them on the hard drive of her computer before they can disappear as fast as they appeared.

Lora’s family and her writing life coexist, if not in harmony, in relative peace with each other. Surrounded by a menagerie of pets, friends, and a son who keeps her quick wit engaged, Lora finds her life filled with joys, aided by her fans whose hearts remind her daily why she writes.