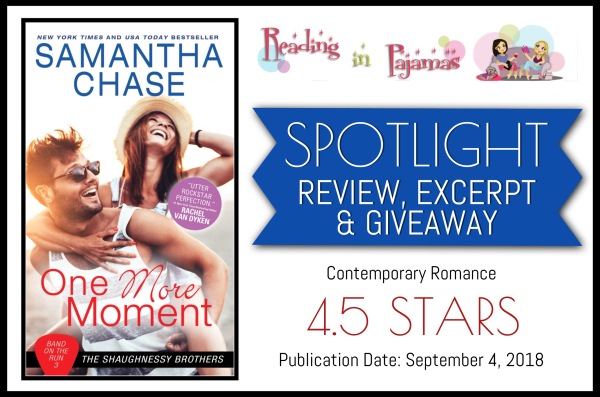 ONE MORE MOMENT (Shaughnessy Brothers: Band on the Run) by Samantha Chase

When Charlotte Clark offers to pay for Julian Grayson’s coffee, the world-famous drummer assumes she wants something from him. But Charlotte has no idea who he is, and Julian can’t resist keeping up the charade—being incognito is a novelty and a relief. He’ll have to tell her…eventually. But as Charlotte cheerfully undertakes to transform his life, Julian realizes there’s something about her that gives him what he hasn’t felt in years: hope.

I enjoyed this story and now need to go back and get the earlier ones – especially since this is the last in this series. I loved how the band and friends cared about each other and their easy banter. That’s why Julian’s almost pouty behavior a few times seemed out of place for me. Not enough to turn me off, just made me pause a second. Charlotte was so selfless, and it was a hoot on how they met. Loved that angle. They were all believable and relatable so that I was pulled into the lovely story. Great chemistry on the romance and just enough heat to make me smile.

Slowly she came to her feet and brushed the sand from her dress. Inhaling deeply, she looked out at the waves one more time before reaching down for her purse. When she turned around, she immediately came up short.

He stood ten feet away from her and his expression was unreadable.

Charlotte normally believed in coincidences, but she was having a hard time accepting this situation was just that. The hopeless romantic side of her—which didn’t come out very often—really wanted to think he’d been hoping to find her here or that he’d specifically been looking for her. But from everything she knew about Julian, he was too stubborn and strong-willed for such things.

They stood like that—facing one another, silently assessing for a few minutes.

“Hi,” she said finally, but didn’t make a move toward him. The breeze off the water kicked up and her hair was blowing wildly, her long skirt whipped against her legs. She groaned at what a mess she must look like but she still couldn’t make herself move.

It took all her self-control not to sag with relief when he finally took a step toward her. “What are you doing out here alone so late?”

And her foolish heart kicked hard in her chest at his gruff question.

“Just getting my daily beach fix in.”

But Julian shook his head even as he kept advancing. “You were out here this morning before you went to work,” he said, his voice low and almost tortured. “Every morning this week you’ve been out here. I can see you from my deck. Try again.”

He knew she’d been here earlier? How…? Why…?

Swallowing hard, she said, “I was heading home and wanted to come out here for a bit. I enjoy watching the sunset. A girl can get two daily beach fixes, you know.” She meant to sound defiant, but she had a feeling it didn’t come out quite that way.

Julian’s gaze roamed over her from head to toe.

And Charlotte cursed how unsexy the windblown look was on her.

They were almost toe to toe and she studied him with equal interest. His jeans were faded and hung low on his hips, his T-shirt was of the threadbare variety and looked like he’d owned it for years. And his hair was a wreck, just as hers was.

And then there was the five o’clock shadow.

It should have been a full-grown beard by now and yet it wasn’t.

But that didn’t mean she didn’t want to feel it scratching her sensitive skin.

Charlotte held her breath while she waited for Julian to call her out on the admission, but he didn’t. Instead, he reached up and stroked one strong finger along her cheek right before his hand cupped it. Her lips parted on a sigh and—unable to help herself—she leaned into his hand.

“What are you doing out here?” she asked softly.

“Waiting for you,” he replied, so quietly she almost didn’t hear him. And before she could respond, Julian closed the distance between them. He felt so warm and solid and wonderful that she forgot what she was going to say.

Not that it would have mattered, because Julian lowered his head and gently touched his lips to hers. There was an uncertainty to him—a vulnerability—and it was quite possibly the sexiest thing about him. She loved the fact that he was comfortable enough around her to be like this.

One soft kiss turned to two and Charlotte slowly ran her hands up his arms.

Julian’s tongue gently teased at her lips as her hands raked up into his hair.

And then she was lost.

They went from slow and sweet to nothing but need in the blink of an eye. Charlotte knew this was why she wasn’t disappointed about being stood up—no one made her feel needy and out of control the way Julian Grayson did. It didn’t matter that she never even had the opportunity to meet her date earlier, she just knew it wouldn’t have been like this.

They kissed until they were breathless and when Julian lifted his head, he began a trail of kisses along her cheek and nipped at her earlobe before shifting and resting his forehead against hers.

“Why can’t I stay away from you?” he asked, but Charlotte had a feeling the question was more to himself than her. Reaching up, he caressed her cheek. “I should be able to stay away, but I just can’t.”

Trembling, she mimicked his pose and savored the scratchiness of his jaw. “Right now, I’m kind of glad you didn’t stay away.” It was good that she was looking down and couldn’t see his reaction to her words. She knew how cagey he could be and the last thing she wanted to do was have him take off on her—not after the second-hottest kiss of her life.

“Come home with me, Charlotte,” he begged quietly. “Please.”

No words had ever sounded sweeter to her.

“We don’t have to do anything but talk, if that’s what you want.” He paused. “I’ve missed seeing you, talking to you.”

Pulling back, this time she did meet his gaze. “I’ve missed seeing you too.”

If it was possible, Charlotte would say he looked relieved and almost…grateful.

Julian reached for her hand and they walked up the beach toward his house. Neither said a word and Charlotte was thankful for these few minutes to get her emotions under control. Maybe it was the same for him.

At the foot of the stairs that led to his deck, she stopped and took her hand from his, pulling her phone from her purse. Julian looked at her quizzically.

“I promised my friend Tami I’d text her when I got home.” As soon as she said the words, she realized how it sounded. “I mean—”

“She wants to know you’re safe,” he finished for her and then caressed her cheek again. “You are, Charlotte. I promise.”

New York Times and USA Today Bestseller/contemporary romance writer Samantha Chase released her debut novel, Jordan’s Return, in November 2011. Although she waited until she was in her 40’s to publish for the first time, writing has been a lifelong passion. Her motivation to take that step was her students: teaching creative writing to elementary age students all the way up through high school and encouraging those students to follow their writing dreams gave Samantha the confidence to take that step as well.

With twenty-three titles currently to her name, she has no plans to slow down. The success of the Montgomery Brothers series has her working on six new titles in that collection as well as two new exciting series set to start popping up on bookshelves in 2015. You won’t find her books with the erotica or paranormal titles, all of her works are pure contemporary romances.

When she’s not working on a new story, she spends her time reading contemporary romances, blogging, playing way too many games of Scrabble on Facebook and spending time with her husband of 25 years and their two sons in North Carolina.

One thought on “Review, Excerpt & Giveaway: ONE MORE MOMENT by Samantha Chase”