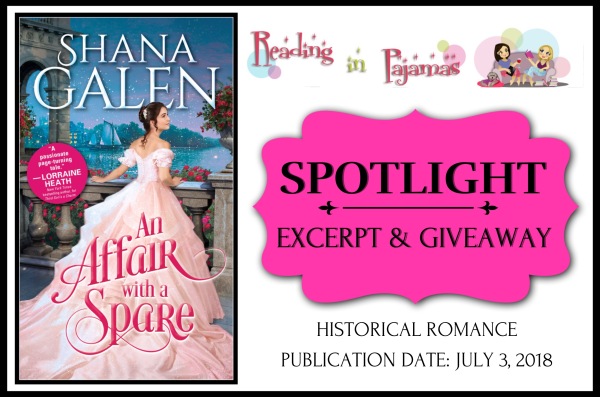 AN AFFAIR WITH A SPARE (The Survivors) by Shana Galen 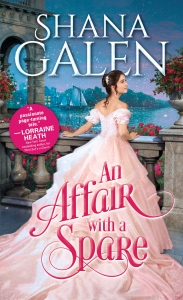 Rafe Beaumont, fifth son of an earl, uses his irresistible charm with the ladies to glean dangerous war secrets. Now he’s putting those skills to the ultimate test: capturing an elusive assassin by seducing his daughter. The problem? She’s entirely immune to Rafe’s flattery.

Never before has Collette Fortier met a man as attractive as Rafe. But her father’s life is at stake, and succumbing to Rafe would be disastrous. But when Rafe turns the tables on her, offering support and friendship instead of a fleeting affair, Collette finds herself tempted in ways she never could have imagined…

In this excerpt from An Affair With a Spare Rafe Beaumont rescues Collette Fournay from an out of control carriage.

Collette smiled, looking down to hide the expression. When she looked back up, a scream lodged in her throat. The three of them had been forced very near the street because of the people passing them on their way to the museum. And on the street, headed straight for them, was a large cart, the sort used to move heavy items, and it careened toward them at breakneck pace. It seemed something had spooked the team pulling it because the horses were wild eyed and out of control. The driver half stood, whip in hand, hollering at the top of his lungs, but the horses paid no attention. They headed straight for the walkway. Straight for Collette, who had been walking on Beaumont’s other side, closest to the street.

She barely had a moment to react, and her reaction was quite ridiculous. She stopped, crouched, and covered her head. She knew the defensive posture was ridiculous, but she couldn’t seem to summon the will to run, which would have been smarter, although probably just as useless. Collette closed her eyes and said a prayer, waiting for the bone-jarring impact of the carriage on her person.

Instead, she felt strong arms lift her by the waist and drag her away. Then she was falling, something heavy falling beside her.

When she opened her eyes, she realized she must have been killed. The most beautiful man was looking down at her, his violet eyes only inches from hers. And he spoke, but she couldn’t hear him over the high-pitched ringing in her ears. The sunlight lit him from behind. He looked over his shoulder and more people gathered, blocking out the light.

This was not heaven but London, and the angel had been Rafe Beaumont.

She tried to speak, but her lungs burned and she could not find her voice.

“Just lie still, Miss Fournay,” Beaumont said. She could hear him, hear everything around her, the sound returning slowly like each piece of an orchestra added one after another.

She nodded, still unable to speak. Then she remembered Lady Ravensgate and looked about frantically for the woman. Though Collette did not particularly like her sponsor, she needed the woman to stay in contact with the royalists who had her father.

“She is fine,” Beaumont said, seeming to read her thoughts. “I shoved her aside and then went back for you. I think she may have hurt her ankle. A woman and a man who claims to be a physician are with her. Are you hurt anywhere?”

She didn’t know. She couldn’t feel her body.

“Just stay still, then. I will take you home and see to everything. If you’ll excuse me for one moment.”

“No!” She grabbed his hand, holding on tightly so he could not move away. Her voice sounded strained, as though she had pushed it through a tight opening. “Stay with me.”

“I won’t leave you, sweetheart.” He touched her cheek with one gloved hand. “But I must see to Lady Ravensgate. I promise I will be right back.”

Collette knew she should release his hand, but she could not seem to manage to uncurl her fingers.

She did. His eyes, his beautiful eyes, were so sincere.

Though it terrified her, she let him go. As soon as he moved away, feeling seemed to come back to her body. Everything hurt. Her back, her arms, her head. She had fallen hard, and though she didn’t think anything was broken, every bit of her felt battered and bruised. She closed her eyes against the sting of tears. She could hear the people around her whispering and murmuring about her. How she wanted to move away, to have her privacy back. The whispers and the crowds looking at her reminded her too much of Paris. But then the crowds had not murmured with sympathy. They’d whispered out of fear.

She felt a cool hand on her cheek and opened her eyes again. Beaumont was there, his bare hand on her skin. “Can you stand, sweetheart?”

“Yes,” she whispered. She tried to rise, to make her body do as she commanded, but when she lifted her head, the world spun. “Give me a moment,” she said, putting her fingers to her temple.

Collette tried to protest when he lifted her into his arms. She did not need to be carried, especially not in front of the prying eyes, but there was no point in arguing. He was already carrying her and doing so with very little effort. He seemed to behave as though she weighed nothing, carrying her as one might carry an infant.

And there was another reason she did not object. She liked being in his arms. The scent of him—spices and musk—tickled her nose. She leaned her head against his strong shoulder and breathed him in. His arms tightened around her, strong arms, powerful arms that cradled her against a muscled chest. For all his appearances, this was not a man given to idleness. She wondered if he would look like the men the Greeks had sculpted. If his legs would be as shapely, his torso as defined, his buttocks as round. And then because the very thought of him naked made her blush, she closed her eyes again.

He carried her into the hackney. When the door closed and Beaumont called out the direction, sheopened her eyes again. He hadn’t set her down, and she found herself on his lap, her arms around his neck. Across from them, the seat was empty.

“I sent her with the physician and his wife. They had a private carriage, and I thought she would be more comfortable.”

“I see. That was thoughtful of you.” Except that it left the two of them alone.

Shana Galen is the national bestselling author of fast-paced adventurous Regency historicals, including the RT Reviewers’ Choice The Making of a Gentleman. Her books have been sold in Brazil, Russia, and the Netherlands and featured in the Rhapsody and Doubleday Book Clubs. A former English teacher in Houston’s inner city, Shana now writes full time. She is a happily married wife and mother of a daughter and a spoiled cat and lives in Houston, Texas.