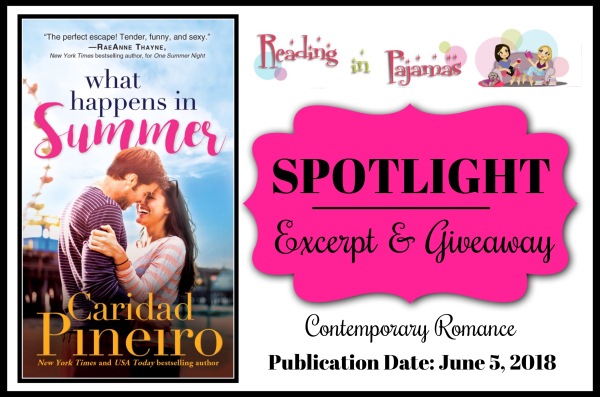 WHAT HAPPENS IN THE SUMMER (At the Shore Series, Book 2) by Caridad Piñeiro 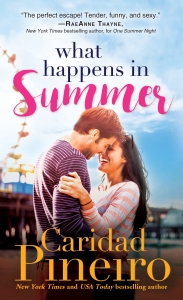 She knows the kind of man he is:
The kind who breaks hearts.
But a hot summer at the Jersey Shore
Might be just what they need to light up their lives…

As the only daughter of a single mom, Connie Reyes swore she would never put herself in a similar position. But when she runs into oh–so-tempting Jonathan Pierce at a wedding, she knows she must stay away. She’ll fall for him—hard. And he’s not the type to stick around. So far the only loyalty he’s shown is to his rescued puppy.

Ever since he left town after their teenage fling, Jonathan hasn’t been able to forget about Connie. He can’t wait to show her the man he’s become. And when the night finally comes, their mutual desire will lead to unexpected consequences…

Playing it safe was far worse than taking a risk on what you wanted.
Jonathan Pierce knew just what he wanted.
He grabbed hold of the gnarly branch of the decades-old wisteria vine that climbed the side of the Sinclair mansion and boosted himself up. He’d made the journey so many times this past summer, he could do it blindfolded.
He scrambled up the vine, finding the familiar foot and handholds until he vaulted up and over the second floor railing, and landed silently as a cat burglar on the balcony. It ran the length of the immense oceanfront mansion, with elegant french doors offering views of the sea.
The first darkened doorway was Maggie Sinclair’s room. He rushed past it quietly; Maggie belonged to his older brother, Owen. Not that Owen had acted on it yet, but Jonathan had known for years that the two were meant to be together, family feud be damned.
The next doorway was usually Maggie’s dad’s, but the old man had stopped coming down to the Shore as often as he once had, so it was a good bet that room was unoccupied.
Reaching the third room, he saw the curtains wafting in the summer breeze and the dim light from behind the partially closed french doors. He smiled and his heart raced with pleasure.
Connie was waiting for him. Ever-responsible, ever-loyal Connie had broken her own rules to fall in love with him. Or at least he thought it was love. It definitely was on his part. With barely a week left before the girls all went back to school, he intended to let her know just how he felt.
He slipped carefully through the open doors and shut them behind him. He’d gone no more than a step when she launched herself at him, laughing and kissing him as she said, “What took you so long?”
“I missed you, too,” he said, knowing it was more about the separation to come in a week and not about the long hours since last night.
He bent his head and kissed her, his touch tender and caring, and she answered in kind, her lips soft and coaxing.
Although Maggie had been bringing her friends to the Jersey Shore every summer since they’d met freshman year in college, he’d never really paid much attention to Connie at first. He’d had his share of girls from his high school class fawning over him.
But when Maggie and her friends had come back the next year, he had finally, gratefully, noticed what a real woman should be. Like Connie: all luscious curves; also proud, smart, and independent,
As impatient as he might be to make love to her tonight, he wanted her to know how much this meant to him. How this wasn’t only a summer romance for him.
He leaned over her, his gaze locked on her face. He wanted to say the words—Lord, how he wanted to—but they stuck in his throat and so he let every kiss and touch tell her what he couldn’t voice.
***
Connie’s heart thudded almost painfully in her chest as she wondered how, in a week’s time, she could leave him. The ache deepened beneath her breastbone and she put her hand there and rubbed to assuage the hurt.
What had started as a summer fling with a funny, smart, and beautiful boy had turned into something so much more, with an incredibly amazing man. Falling in love with Jonathan hadn’t been in her game plan, but he was just too hard to resist.
She should have resisted. He was a Pierce. She wasn’t a Sinclair, but Maggie was like a sister and that stupid family feud was still going strong, as far as she knew.
He was going back to Villanova in a week and she’d be returning to Princeton. The colleges were not all that far apart, but if she was to execute her game plan, she had to stay in the game, which meant studying and more studying. Not nights spent in bed making love and days spent daydreaming about the nights. But like Adam with Eve, now that she’d had a bite of such delicious forbidden fruit, she didn’t know how she could go on a Jonathan-free diet.
At the moment, she could just admire his sun-streaked light brown hair waving wildly around a masculine face with chiseled features. A sexy dimpled grin was on his lips and his eyes glittered with a blue as enchanting as a Sea Kiss summer sea.
That ache in her heart rocketed to life again together with an almost unbearable lightness in her soul. For so much of her life she’d been driven to accomplish more and more, but with Jonathan, she could just be herself. No goals or responsibilities. Just…happy.
And so, in the blink of an eye, her game plan altered. She could see it all so clearly, only now Jonathan was there beside her at each step. Finish college. Head to law school. Pass the bar. Get a job in a big New York City law firm so she could help her family financially, as well as others who had legal problems and couldn’t afford representation. Become a partner. Marry Jonathan. Or maybe marry Jonathan and then become a partner. She didn’t want to wait too long to be with him forever.
Not that she’d ever pictured getting married to anyone before, since her home life hadn’t been anything great. But for Jonathan, she’d make an exception.

BOOK 1 is FREE for a Limited Time! (Check Price before Buying)

ONE SUMMER NIGHT (At the Shore Book 1) by Caridad Pineiro https://amzn.to/2sDqfBm

1 of 3 copies of ONE SUMMER NIGHT by Caridad Pineiro

Caridad Pineiro is a transplanted Long Island girl who has fallen in love with pork roll and the Jersey Shore, but still can’t get the hang of tomato pies. When Caridad isn’t taking long strolls along the boardwalk to maintain her sanity and burn off that pork roll, she’s also a NY Times and USA Today bestselling author with over a million books sold worldwide. Caridad is passionate about writing and helping others explore and develop their skills as writers. She is a founding member of the Liberty States Fiction Writers and has presented workshops at the RT Book Club Convention, Romance Writers of America National Conference as well as various writing organizations throughout the country.