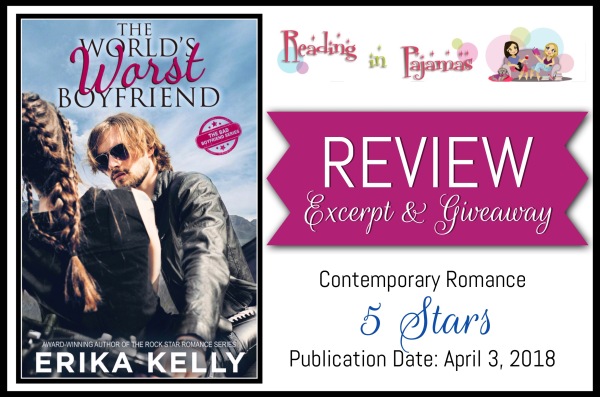 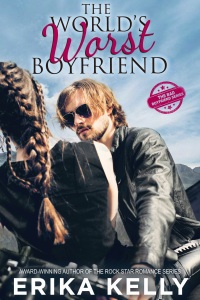 Six years ago Fin Bowie made a decision that cost him the love of his life. Now his ex is coming back to town for her brother’s wedding, and he can finally make things right. Except, right before the event, a text he sent goes viral. Overnight, he becomes an international meme. And it’s hard to win your woman back when the whole world’s calling you The World’s Worst Boyfriend.

The last thing on Calliope Bell’s mind is getting back with Fin. Not when her life’s just gone sideways, forcing her to spend the summer in Calamity, Wyoming. She can’t be away from the New York art world this long, so she comes up with the idea to turn the hottest pop culture event of the moment into a museum exhibition.

The two have every intention of avoiding each other–until the county judge sentences Fin to community service…helping her exploit the meme he’s trying to make go away.

The sight of Fin Bowie standing in her foyer hit like opening the door to a surprise party. That disheveled hair and facial scruff, his big, muscular body and moody expression, made Callie’s heart flip over.

“Hey.” Did she have to sound so out of breath? Her heart pounded like she’d just been chased through the woods at night by a bear.

And it didn’t help that his gaze took a slow roll up her body, from her red-tipped toes to her bare legs—her upper thighs covered in ruffled cotton sleep shorts—to the pink long-sleeved T-shirt covering her chest. When he finally reached her eyes, his nostrils flared, and his expression turned carnal. A zing of awareness shot through her.

And then he smiled. And when Fin Bowie smiled it was like the finale of a fireworks display. “What’s up?” She hated the slight tremor in her voice. Worse, she hated the fuse he lit inside her.

The last thing she wanted to do was get in that truck with him, but they were going to work together, so they had to get some things resolved. As she followed him out the door, she tried to reclaim her composure, but her paralyzed hands couldn’t grasp it and, as she climbed down the porch steps, the bridge of time collapsed, plunging her into freefall.

Images flew at her, immersing her in a tumult of sharp, vivid emotions.

The thrill of Fin unhinging the basement door she’d locked after he’d told her he couldn’t go to their junior prom because of his brother’s skiing competition. So much anger—no, outrage—expressed in a furious fight that had ended in desperate, raw sex.

The naughty pleasure of riding him in his truck, her fingers clutching the back of his seat, her hips slamming down and grinding. That wild imperative to get closer, deeper, to meld with him.

The boundless joy as they’d leapt off the cliff together, hands joined, her smile stretching so wide it felt stupid. Plummeting into ice cold water. And the indescribable happiness when they’d popped up and reached for each other—her legs wrapped around his waist, his arms cinching her tightly. She’d never felt anything like it since.

And the pure relief of slamming into the wall of Fin’s chest in the hallway after she’d found out Piglet, her little runt of a mutt, had been struck and killed by a minivan. The deep satisfaction, when she’d collapsed into his arms, of knowing her soul had a harbor, and it was Fin Bowie.

He’d been there for her more times than not, but the times he’d let her down stuck in her joints like burrs, reminding her with sharp twinges every time she so much as rolled over in bed.

Blocking out the good memories had been easy…until she’d come home. Here, they were everywhere. She breathed them in at night in her childhood bed, and she ate them for breakfast at the kitchen table.

Fortunately, when she closed the front door behind her, the cool mountain air rushed over her skin and snapped her back to the moment. The hints of sage from the surrounding meadow and smoke from the town’s nightly bonfire woke up her senses.

It was okay to remember. Important, actually, because she’d never resolved anything. She’d just thrown herself into work, into survival mode. Finals, projects, hurrying to the diner, the bar, racing to get errands done in stolen moments…all of it had kept her on the run.

She never would’ve stopped, would she? If Julian hadn’t dumped her, forcing her to live at home for the summer, she’d still be on the lam from a past that demanded reconciliation.

She’d take this ride with Fin, confront the memories, and then she could finally let them go. Let himgo.

Loved! Oh my goodness y’all this book gave me all the feels! I haven’t been this excited since I read Erika Kelly’s first book. This new series is going to be awesome. I’m obsessed with the Bowie brothers! Obsessed and addicted! THE WORLD’S WORST BOYFRIEND is the first book in Erika Kelly’s new series that will feature the Bowie brothers. I fell hard for Fin. If you have read Erika Kelly’s Rock Star series you know she can deliver some great heroes and I’ve had some favorites in the past but Fin might be topping my list now. He just tugged at my heart-strings and he never gave up. Fin and Calli’s story is a second chance love story. I loved their story and couldn’t put it down. Go grab this book and fall in love with Fin. If you haven’t read Erika Kelly’s books I highly recommend all of her books. She’s an author I usually recommend if a reader asks me for a feel good romance recommendation because she delivers a happy ending.

*Review copy provided by the Inkslinger in exchange for an honest review. 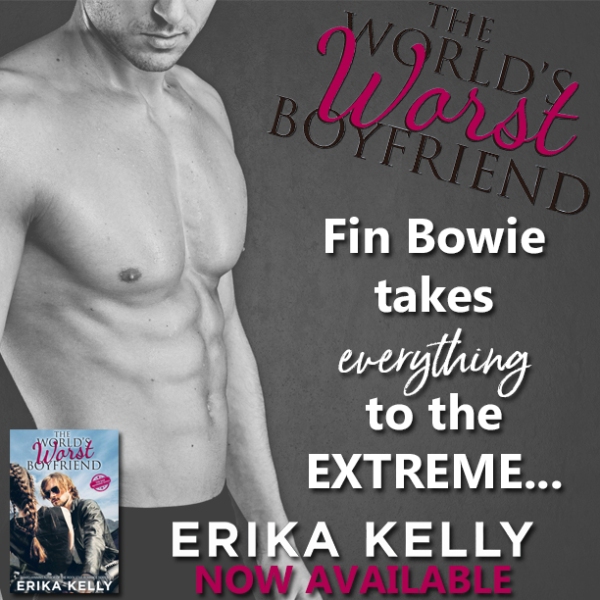 eCopy Set of MINE FOR NOW, MINE FOR THE WEEK, and MORE THAN A FEELING for 3 winners (US and Canada Only) 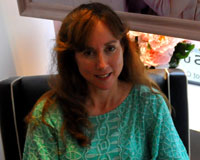