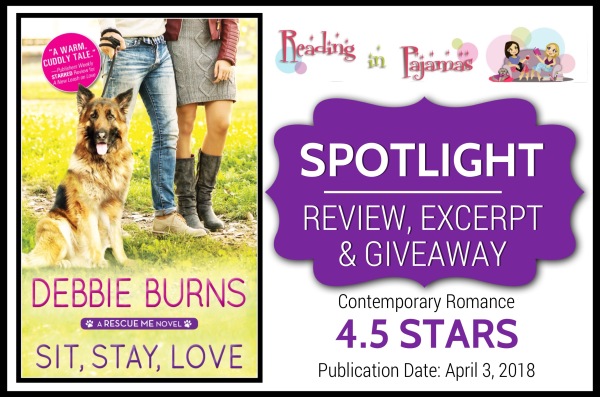 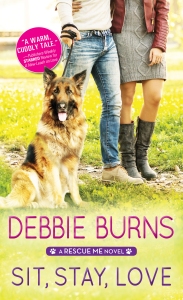 These dogs aren’t the only ones in need of rescue

For devoted no-kill shelter worker Kelsey Sutton, rehabbing a group of rescue dogs is a welcome challenge. Working with a sexy ex-military dog handler who needs some TLC himself? That’s a different story.

Kurt Crawford keeps his heart locked away from everyone. Well, everyone except the dogs who need his help…and always have his back. But as Kurt gets to know the compassionate, beautiful woman he’s been assigned to work with, he can’t help but feel a little puppy love…

This is a lovely, light romance with a cast of varied personalities and emotions. There is no real drama to tense you up, yet it never got boring or saccharine. Kurt may have seemed a bit too standoffish at first, and Kelsey too naively optimistic, but it all worked. It was real people, real life and real love woven around rescued dogs. I enjoyed this feel-good story.

It had been years since Kurt had felt genuine peace slip over him after the sun sank below the horizon and stars studded the sky. In Afghanistan and in the jungles of Honduras, he’d rarely been able to relax, even on nights when he was tucked in a bunk and crowded with the sounds and smells of other marines and a handful of dogs not far away. He hadn’t expected to be able to do so here either.
But the calm cradled his skin despite the surprise that accompanied it.
Standing under the stars, Kurt set his beer on the table and headed into the screened-in half of the porch. The pregnant Rottweiler let out a whine as he approached. Kelsey had taken her outside an hour or so before after making sure she ate a plentiful dinner.
Kurt hooked a leash onto the dog’s collar and led her around the yard long enough to ensure she was calm and obedient, then asked her to sit on command before letting her off leash. Once free from its confines, the Rott—Pepper, as Kelsey was calling her—gave her massive head a shake and trotted off into the yard. Kurt headed back onto the porch for his beer.
Taking a swig of beer, Kurt eyed the silhouette of an owl standing watch on an exposed branch of an enormous oak tree at the back of the yard. If Kurt hadn’t been outside when it let out a series of soft, low hoots, he wouldn’t have known the owl was there. It seemed to be watching the dog sniff around the dark yard as if it had come across an interloper in its nightly hunting spot.
A cool, gentle breeze swept over Kurt’s skin. He was thankful to no longer be living in sweltering lands. The dry oven that was the desert, and the wet, stifling tropics. He wondered how long it would be before he forgot the sensation of the heat rising off the desert sand late at the night as if he were holding his hand over a radiator. Or standing guard in the jungle at night, listening to the howler monkeys crossing the tree canopy while he scoped openings in the thick tropical forest for insurgents. One night he’d spotted a small, wild ocelot hunting at the edge of the base. About the size of a slender coyote, it had unusually large eyes and a sleek coat with spots and stripes.
As he was thinking about it, a very different feline stalked into view. Mr. Longtail. Who knew where the unusual cat had been this evening, but he was headed confidently toward the Rott, in full view of the owl. The enormous Maine coon was too big to ever end up dinner to an owl, but Kurt wasn’t so sure about the off-leash Rott. Setting down his beer, he whistled confidently.
Pepper—the name was sticking even though naming these dogs would create unnecessary emotional attachment—pricked up her ears and looked his way.
“Come here, girl,” Kurt called, half holding his breath as the cat trotted directly into the dog’s path. Like earlier this afternoon, Pepper didn’t disappoint. She dropped into a play bow and woofed. Mr. Longtail stopped mid-step as the hair along his back and tail stood out stick straight. As if he’d had no idea a dog was capable of such a baritone woof. Pepper didn’t seem to notice. She sniffed the cat all over, nudging his hind end off the ground with her strong head.
Kurt emptied his pocket of treats for her. Mr. Longtail followed, walking underneath her, straight to Kurt’s legs to rub against his jeans. The cat meowed, and Kurt was surprised to hear a deep, thrumming purr radiating from his chest.
After getting Pepper back in her kennel, Kurt headed into the kitchen, Mr. Longtail following. He fed the cat and helped himself to a slice of cold pizza. He considered hunting down a notebook and pen and making a to-do list of all the items bouncing around his head, but even if he could find a pen and a notebook, he doubted he’d get halfway through writing the list before becoming distracted. Experience had proven he could tackle projects of almost any size, but he couldn’t make a list to save himself. So instead, he dove into repairs of the Sabrina Raven estate the way he did everything else—focusing on whatever came to the front of his thoughts.
He sorted through a bulky metal toolbox for all the flooring nails he could find. “Come on, cat,” Kurt said to the watchful Mr. Longtail. He slipped the nails into his pocket and fisted the hammer, heading out of the kitchen. “You and I could likely use each other’s company. Let’s see if I can get those stairs to be a bit less of a hazard so I can make it up to one of those old feather beds you’ve been sleeping on.”
With a twitch of his tail, the cat followed him out of the kitchen, and Kurt suspected he was on the way to making an unlikely friend. 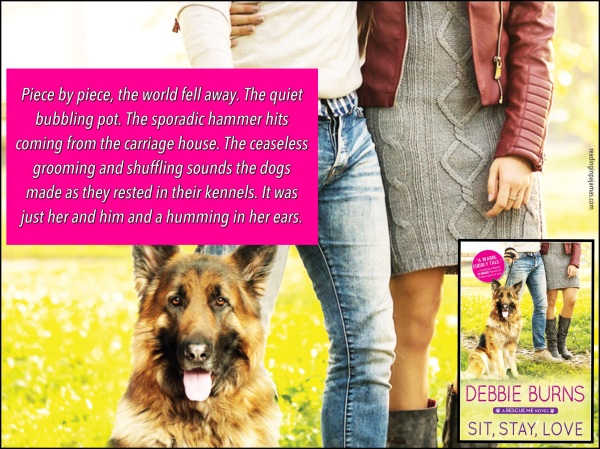 Enter to win one of five copies of A New Leash on Love by Debbie Burns!

Debbie Burns lives in St. Louis with her family, two phenomenal rescue dogs, and a somewhat tetchy Maine coon cat who everyone loves anyway. Her hobbies include hiking, gardening, and daydreaming, which, of course, always leads to new story ideas.