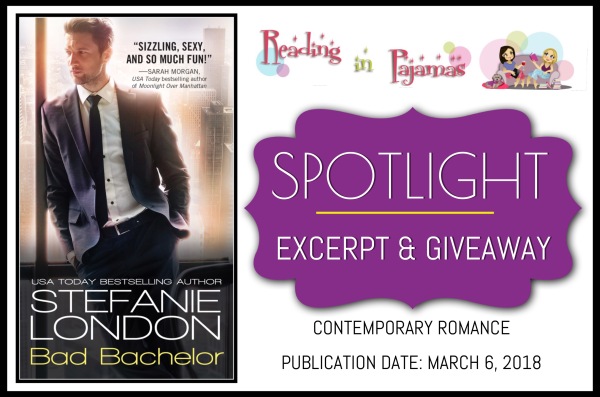 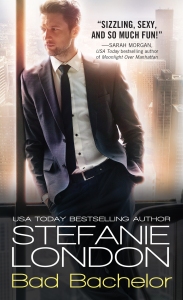 Everybody’s talking about the hot new app reviewing New York’s most eligible bachelors. But why focus on prince charming when you can read the latest dirt on the lowest-ranked “Bad Bachelors”—NYC’s most notorious bad boys?

If one more person mentions Bad Bachelors to Reed McMahon, someone’s gonna get hurt. A PR whiz, Reed is known as an ‘image fixer’ but his womanizing ways have caught up with him. What he needs is a PR miracle of his own.

When Reed strolls into Darcy Greer’s workplace offering to help save the struggling library, she isn’t buying it. The prickly Brooklynite knows Reed is exactly the kind of guy she should avoid. But the library does need his help. As she reluctantly works with Reed, she realizes there’s more to a man than his reputation. Maybe, just maybe Bad Bachelor #1 is THE one for her.

“Got your eye on someone?” She ran her tongue across her lower lip. His eyes tracked the movement, intently following the half-moon swipe as if his life depended on it. “Chasing a little skirt?”

He smirked. “I’m pretty sure people don’t say that anymore.”

Darcy’s cheeks burned, but she tried to hide it with a haughty flick of her ponytail over one shoulder. “Dodging the question, I see. Nice move, but it won’t work on me.”

“What would work on you?” He leaned a little closer and Darcy’s brain short-circuited. It would be a goddamn miracle if sparks weren’t flying out of her ears.

He frowned. “You think I don’t respect you?”

“I don’t know if you respect any of the women you pursue. How can you when all you want is sex?” The second the words were out of her mouth, she wanted to take them back.

Reed wasn’t the kind of guy with whom she should engage in verbal sparring. Not only that, but she was also starting to wonder exactly how much her opinion of him was based on what had been spoon-fed to her. It was easy to see him as the villain with his hypnotic good looks and commanding charm.

“Why do you think wanting sex and being respectful are mutually exclusive?”

The question halted her internal parade of confusion. “I don’t know, actually.”

“Because you’ve been conditioned to think that once you hand over the keys to the kingdom, you’ve lost all bargaining power.” His tilted his chin up ever so slightly.

“Women are taught to believe that once men get sex, they won’t want anything else.”

“Isn’t it true?” She folded her arms across her chest.

The moment Reed’s eyes eased down to where her breasts pressed against the low neckline of her borrowed top, she dropped her hands again. “Do you want anything else from a woman after you’ve slept with her?”

He inched closer, his head dipping to hers. The air in Darcy’s lungs stilled, an indignant squeak clogging the back of her throat as her lips parted. A protest should have shot out of her, a “no fucking way” aimed squarely in his direction. But her dignity melted under the fire crackling between them, causing her body to prepare itself for his kiss.

“You’re not my type,” she gritted out.

Instead of looking affronted, Reed threw his head back and laughed. The booming sound cut the tension like a knife through butter.

“What?” she huffed. “Is it really so hard to believe I don’t find you attractive?”

“Sweetheart, most women find me attractive. Some just hide it better than others.” His hand came up to brush a strand of hair that had fallen across her forehead.

“Screw you.” She planted a hand against his chest and gave him a warning shove.

Mistake. The hard muscle beneath his crisp, white shirt felt even better than it looked. Her imagination was already having a field day filling in the blanks—the smooth skin, the little trail of hair that would guide her hand down below the waistband of his pants. The hefty weight she’d feel in her palm. She resolutely kept her eyes forward. “I’ll have you know I’m here for someone else.”

“Yes, Five-Star Darren.” Reed smirked. “I saw him at the bar. You know he’s balding on top, right?”

There was something about Darcy that caused Reed’s competitive streak to flare up. It prickled under his skin, turning a fleeting thought into a persistent drone. It was the exact reason he’d come into this bar when he’d spotted Darcy by chance. She’d walked in with two friends, laughing and smiling in a way she didn’t around him. Before he’d even given it a second thought, he’d headed into the bar after her, desperate to see more of Darcy in her natural state.

Then he’d seen Five-Star Darren too. He didn’t know the guy personally, but he’d trawled through Bad Bachelors looking at the guys they’d deemed better than him.

So that’s why she was here? To chase some guy who’d likely leave her wanting and unfulfilled? It was obvious she was attracted to Reed—and not because he believed the drivel he spouted about women wanting him, but because he could see it plain as day.

Yet she fought it at every turn.

Her chest rose and fell in uneven bursts, as though she had to remind herself to continue breathing. Then there was the fidgeting, the hair flipping, and the tightening of that perfect, pouty mouth.

“I bet if I kissed you, that sweet, little mouth would part like the Red Sea.” Satisfaction coursed through him when her nostrils flared. He dipped his head lower, so he could whisper right into her ear. “And I bet your hands would curl into my shirt, so you could hang on for dear life.”

Her breath stuttered in and out. “You don’t affect me, Reed.”

Defiance rolled off her in waves.

“Kiss me then,” she taunted. “You’ll be disappointed with my reaction.”

“I doubt that very much.”

Her eyes widened when she realized he fully intended to prove her wrong. Shifting, he moved his body over hers, trapping her by planting his palms against the wall, one on either side of her. Caging her in. Sealing off the exits.

Enter to win a copy of BAD BACHELOR by Stefanie London! 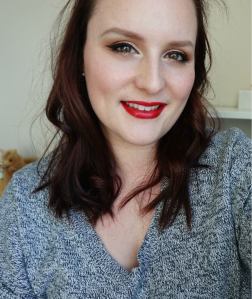 Stefanie London is the USA Today bestselling author of contemporary romances with humor, heat, and heart. Originally from Melbourne, Australia, Stefanie now lives in Toronto, Canada with her husband. She loves to read, collect lipsticks, watch zombie movies and drink coffee. Her bestselling book, Pretend It’s Love, was a 2016 Romantic Book of the Year finalist with the Romance Writers of Australia.