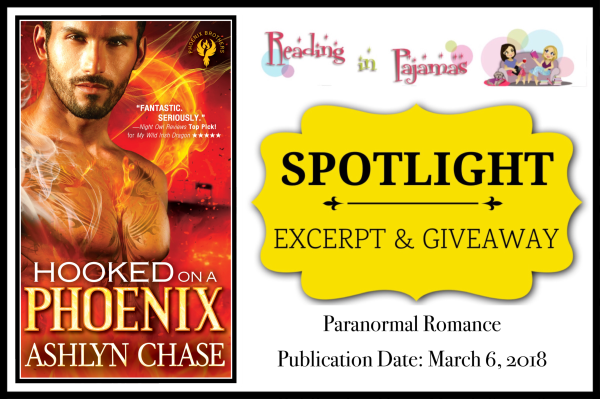 HOOKED ON A PHOENIX (Phoenix Brothers, Book 1) by Ashlyn Chase 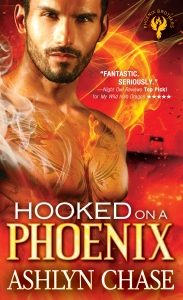 LOCKED IN A BANK VAULT TOGETHER

Misty Carlisle works as a bank teller in Boston’s financial district. She’s had more rotten luck in her life than most, except when her childhood crush shows up to cash his paycheck. Then her heart races and her mouth goes dry.

Gabe Fierro is a firefighter—and a phoenix. Like his brothers, his biggest challenge is finding a woman open-minded enough to accept a shapeshifter into her life. When his boyhood friend asks him to watch over his little sister Misty, he reluctantly agrees. But when the bank where she works gets held up, Gabe does everything he can to protect her. The two of them end up locked in the bank’s vault…where things get steamier than either of them ever imagined.

Misty’s party didn’t break up until after midnight, so she wasn’t surprised when she woke to the sting of the fully risen sun. She sat up and rubbed the sleep from her eyes. The evening came flooding back, especially the part where Gabe made a quick appearance and disappeared like a magician in a cloud of panic.
Her friends apologized and giggled and wanted to run after him, but thank goodness, she talked them out of that.
He would have been mortified. Correction, more mortified. “Should I call him? I was waiting for him to come to me,” she muttered to herself. Well, he’d done that.
She wandered out to the kitchen and made her morning coffee. Her one splurge was good coffee. She’d bought one of those special French presses that made two cups of strong, dark Kona roast. She needed it this morning.
As she waited for the water to boil, she tried to phrase what she would say. Hey, Gabe… Was that you who barely escaped with your underwear last night? She couldn’t help giggling. Maybe she could tease him, saying he could have a part-time job delivering strippergrams.
She shook her head, picturing the big somber guy he’d become handling any of that well. He would probably stammer and change the subject. How had he become so serious? She didn’t remember him that way.
He was always on the quiet side, but with Parker, he was able to talk and laugh. She guessed that in a family of nine, somebody had to be quiet.
But it’s not like he needs to be with me. Well, whatever she said, it had to happen soon. If she  let it go, it would look like she hadn’t cared what her friends did. If the shoe were on the other foot, he’d be right there apologizing for his friends—probably after he knocked down anyone who touched her. That made her smile…then wonder at herself. She certainly wouldn’t want to inspire anyone to violence. But it would be nice to know he cared. A little.
She sighed deeply and finished making her coffee. After a few fortifying sips, she located her phone. On her way to her closet, she realized she had forgotten to charge it. “I guess that dumb landline will come in handy after all, Parker.”
She felt a little foolish talking to her brother as if he were in the room instead of far away. What to tell him had also been weighing on her mind. The tests weren’t looking good. She’d been told there were lesions and she should see a specialist. They needed to know if the disease was active or not.
The disease. Yeah. They’d ruled out everything except MS. They hadn’t made it official yet, but it seemed only a matter of time before they ran out of other tests and explanations.
Suddenly, she felt ill. Nausea was an early symptom, but she hadn’t had that one yet. Chills invaded her, and a sweat broke out on her forehead. She dashed for the bathroom and made it to the toilet bowl just in time. Last night’s pizza made a reappearance along with a lot of pink fluid. Ugh. Too much wine. It must have been the wine.
When she was able to get up, she brushed her teeth viciously, trying to get every crevice and taste bud clean. Then she dressed in jeans and a sweater, her usual Sunday morning attire. Even if she did feel like going to church, which she didn’t, she could go like this. No one got all dressed up at the church she belonged to. Boy, am I feeling lazy.
“Well, I have to call him,” she said and strolled to the living room where she kept the landline on an end table.
After a couple of rings, Gabe answered. “Misty?”
“Yeah, hi. Sorry about last night. Are you okay?”
He laughed. “I’m fine. It was flattering in a bizarre way.”
“Well, I’m glad you’re looking at it like that. I’m really sorry for my friends. When we all get together, we can act a little…wild.”
“You probably needed to go a little wild.”
She relaxed. “I did. But I wasn’t feeling too great this morning. I didn’t think I had that much to drink, but I must have. Oh well. Live and learn.”
“Are you feeling okay now?”
“Yeah. Perfectly fine.”
“Good. Would you like some company?”
Her brows shot up. “Seriously?” That popped out before she had a chance to think it through. Of course she wanted his company!
“Unless you’re busy,” he added.
“No. I was just planning on having a lazy, do-nothing day. I’d welcome your company.”
“Okay. Maybe I’ll bring a board game. Do you still like Risk?”
“You’re kidding. You still have that?”
“Yup. We’re Yankees, Misty. Perfectly good games aren’t thrown away, even if nobody plays with them much. You know the Yankee motto…”
“Yeah, I’ve heard it. Use it up, wear it out, make it do, or do without. Okay then. Bring it. I guess you got over your aversion to taking a risk?” She almost slapped her hand over her mouth. Did I just say that? Way to sabotage yourself again, Misty.
After a brief pause, he said in a quiet voice, “I might be getting there.”
After he hung up, she ran around like a demon, cleaning up after the party, vacuuming, dusting, and paying special attention to the bedroom. By the time he got there, she was pooped.

A multi-published eBook author, Ashlyn Chase specializes in characters who reinvent themselves, having reinvented herself numerous times. She has worked as a psychiatric nurse, and for the Red Cross, and has a degree in behavioral sciences. She lives with her true-life hero husband in beautiful New Hampshire.

One thought on “Spotlight, Excerpt & Giveaway: HOOKED ON A PHOENIX by Ashlyn Chase”