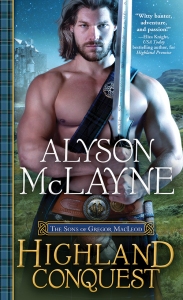 HE WAS LOOKING FOR VENGEANCE
INSTEAD HE FOUND HER

Laird Lachlan MacKay never planned on leading his clan, but when his older brother was murdered, he was left with no choice. His vow to avenge his brother has led him to the MacPherson clan—and their bewitching healer, Amber.

Amber MacPherson is desperate. Dressed as a boy to escape her clan’s treacherous leader, she runs right into Lachlan—who orders her detained. At first she causes him nothing but frustration, especially when she blackmails him into helping her clan. But when she’s threatened by the same man who murdered his brother, Lachlan will do whatever it takes to keep her safe—and by his side.

I thoroughly enjoyed this highlander romance. HIGHLAND CONQUEST is the second book in Alyson McLayne’s The Sons of Gregor MacLeod Series, but it can be read as a standalone. I’m a huge fan of highlander heroes and this book definitely satisfied my obsession. HIGHLAND CONQUEST captured and held my attention. It was a good mix of danger, passion, humor and romance. This is the first book I have read by Alyson McLayne and I’ll definitely be reading more. I have the first book on my kindle and I added the next release to my TBR. I recommend this series for historical romance lovers looking for their next highlander fix. 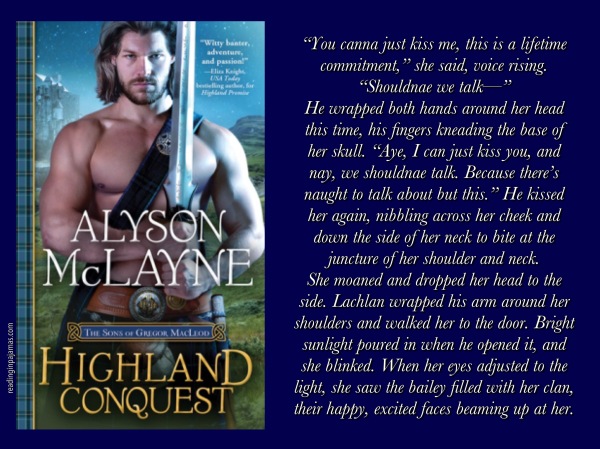 February is fast approaching, and with it come several big events in my life. Not only do my kids turn 6 at the end of the month, but on the actual 6th, my historical romance, HIGHLAND CONQUEST—book 2 in my series THE SONS OF GREGOR MACLEOD—releases to the world! This is a book I can’t wait to hit the stands. The love story between Amber and Lachlan is one of my favorites. Amber is the MacPherson healer who’s had to pretend to be a witch in order to stay safe from her depraved laird while she heals her people. Lachlan’s the laird of his own clan who attacks the MacPhersons in order to bring their laird to justice for killing Lachlan’s brother. When the MacPherson laird escapes, Amber blackmails Lachlan into sticking around and helping her people. She’s outspoken and strong-willed and doesn’t hold anything back in her dealings with her new laird. Lachlan doesn’t hold back, either, and the two of them begin a tumultuous relationship that dances around their physical and mental attraction and drives both of them just a wee bit batty.

February also brings us Valentine’s Day, a favorite holiday of many romance readers! So I decided to celebrate the release of HIGHLAND CONQUEST on February 6th, and Valentine’s Day eight days later, by revealing my top 6 favorite romance couples of all time!

When I was ten-years-old, my mom gave me the first three Anne of Green Gables books by Lucy Maude Montgomery. I got hooked on Anne’s adventures and all the different characters in Avonlea, including her nemesis, Gilbert Blythe. When they first meet, Gilbert pulls Anne’s braid and teases her about her red hair, calling her “carrots”. She responds by smashing her slate over his head. Thus the relationship between Anne and Gilbert is born, and a rivalry and enmity develops between them that takes years for them to overcome. Along the way Anne refuses Gilbert’s declaration of love and almost becomes engaged to another man. But finally she realizes she loves Gilbert too, and wishes with all her heart that he’ll say the words again. Which he does, bringing me my first ever Happily Ever After—warm fuzzies and a heartfelt sigh included.

Just saying those names leaves me sighing and feeling a little teary and mushy inside (in a good way!). Theirs is a romance for the ages, portrayed beautifully by Liv Tyler and Viggo Mortensen in Peter Jackson’s filmed adaptation of JRR Tolkien’s Lord Of The Rings. Arwen, daughter of Lord Elrond of Rivendell, is an immortal elf who falls in love with the mortal Aragorn, heir of Isildur and rightful claimant to the thrones of Arnor and Gondor. In order to be together, Arwen has to give up her immortality and know that she will only die after Aragorn has died. Aragorn tries to dissuade her from being with him, but Arwen will not be swayed, saying: “I would rather share one lifetime with you, than face all the ages of this world alone.” Sigh…

If I had to pick a book boyfriend it would be Barrons from Karen Marie Moning’s Fever series. He. Makes. Me. Shiver—in a good way. He is the epitome of Alpha—strong, dominant, smart, whose only saving grace is that Mac is his everything…even if she doesn’t yet know it. There is no greater bad boy in my opinion. You just know that his reserve and icy control shields a raging inferno beneath. When Mac & Barrons finally get together at the end of book four (and yes, I do know they were together when she was Priya, but that doesn’t count), it’s like he unleashes himself on her. He devours her and she devours him right back. And what makes their love story even twistier, adding more layers to their relationship through the first four books, is discovering in a later book (Burned, I think) that Jericho Barrons and MacKayla Lane have done the wild deed once before—all night long—and Barrons used magic to erase Mac’s memory of it. Bad. Boy. And here’s the other thing I love… they still call each other Barrons and Miss Lane, same as they always did, unless they’re having sex or in near-death situations. Then it’s Jericho and Mac.

How can I write a list about my favorite couples and not include Elizabeth Bennet and Fitzwilliam Darcy? Pride and Prejudice by Jane Austen is one of the first classic novels that I read and I kept the book in my backpack for many months reading it over and over, when I was at university. Mr. Darcy’s proposal to Elizabeth about halfway through the story is a shock because he’s been nothing but aloof and haughty toward her and her family—in fact, the proposal is filled with condescension about Elizabeth’s lack of social position and wealth compared to his, and he claims it’s an obstacle his love has had to overcome. The scene where Elizabeth rejects him is a favorite of mine—especially the rain-soaked version between Keira Knightley and Matthew Macfadyen. What I love about this scene, is that Mr. Darcy is undone by her. He takes her opinion of him to heart, even though some of her accusations against him are unfounded. She opens his eyes to his lack of kindness and grace and it changes him for the better—makes him into a man that Elizabeth could love.

I contemplated putting Han Solo and Princess Leia at the top of the list. My brother took me to see Star Wars when it first came out, so technically they were the first couple I met—but at seven, I was too young to truly appreciate the sigh-worthiness of Han and Leia. This is a romance that builds…and builds…and builds amidst verbal sparring and sarcastic jabs until finally near the end of The Empire Strikes Back they kiss—just before Han is yanked away from Leia and frozen alive in carbonite.  Irrepressible bad boy that he is, when Leia says a heartfelt, “I love you,” as they’re securing Han for freezing, Han looks back at her and simply says, “I know.” Gets me every time.

Seeing as I write Highlander romance (and love Highlander romance—big shout out to some of my favorites: Julie Garwood, Monica McCarty, and Karen Marie Moning!) it would be impossible for me NOT to include Claire and Jamie Fraser from Diana Gabaldon’s Outlander series. She’s created this unforgettable, iconic romance between Jamie and Claire all wrapped up in some of the most interesting and tumultuous times in Scottish history. I’m going to choose to focus on book three, Voyager, for one big reason: the REUNION. Le sigh. You begin the book, knowing that Claire and Jamie will reunite after so many years apart, and then you have to wait…and wait. Or was I the only one who didn’t jump ahead? Finally, Claire walks into Jamie’s shop, and they kiss, but we still have to wait as Jamie grabs the drunken Mr. Willoughby from the pub, gets chased, and takes Claire back to a whore house, before…the moment. It starts with an awkward kiss and nose bump before Jamie takes control and says to Claire, “Give me your mouth, Sassenach.” Excuse me while I melt.

Do you like my list? Did I miss any of your favorites? Please let me know if you agree or disagree with my top 6 favorite romance couples!

A stay-at-home mom of twins and award-winning writer, Alyson McLayne is a dog lover and cat servant with a serious stash of dark chocolate. After getting her degree in theater at the University of Alberta, she promptly moved to the west coast where she worked in film for several years and met her Prop Master husband.