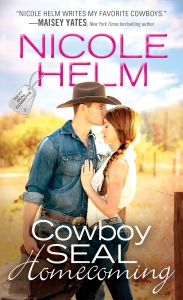 Three former Navy SEALs
Injured in the line of duty
Desperate for a new beginning…
Searching for a place to call their own.

Alex Maguire never thought he’d go home again. The perfect soldier, the perfect leader, he’s spent his whole life running away from Blue Valley, Montana—but when a tragic accident bounces him and two of his men out of the SEALs, there’s nowhere left to turn but the ranch he used to call his own…and the confusing, innocently beguiling woman who now lives there.

Becca Denton’s like nothing he could have imagined. She’s far too tempting for her own good, but when she offers to help turn the ranch into a haven for injured veterans, he can’t exactly say no. He’ll just need to keep his distance. But something in her big green eyes makes Alex want to set aside the mantle of the perfect soldier and discover the man he could have been…safe and whole within the shelter of her arms.

The Prodigal SEAL has come home. 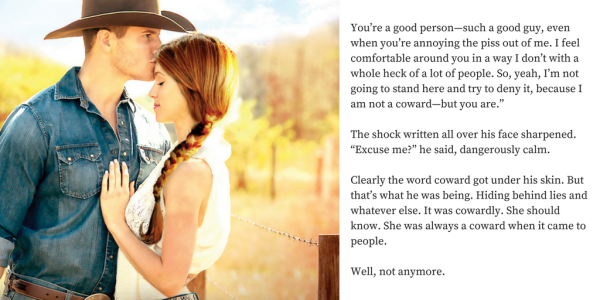 Alex didn’t care if things had changed. Of course things had changed. That was what things did. They changed. Things could look exactly the same on the outside and be completely different on the inside.
Which was a metaphor for jack shit. And it didn’t bother him in the least.
He filled three mugs, leaving the fourth empty for when Jack appeared. He set one on the counter next to where Becca was scrambling eggs and then took his and Gabe’s to the table.
“You, uh, said something about Dad rehiring Hick, right? Does he do the morning chores?” Alex asked.
“He handles most of the stuff with the cattle. I see to the horses. I’m sure Hick’ll be glad to have help though. He’s been hiring some seasonal staff, but it’s hard when we don’t have a place for them to stay.”
“Obviously…” Alex trailed off at the sound of a—he actually didn’t know what that sound was. Gabe was looking around the kitchen trying to find the source of it too.
Becca cursed and wiped her hands on a towel before tossing it onto the counter. “Damn it, Ron Swanson.”
Alex exchanged confused glances with Gabe. Gabe shrugged. Becca hurried out of the kitchen and Alex followed her. She went straight toward Dad’s office, which caused Alex to pause.
Before she could get to the hallway that led to the office and the mudroom, an animal clopped forward.
Becca fisted her hands on her hips. “You know you’re not supposed to do this,” she scolded.
The animal was not a dog or a cat or any normal inside, domesticated pet. It was a goat. And it bleated at her as if in answer.
What the fuck?
Becca glanced over her shoulder at him. “Ron Swanson here figured out how to use the doggie door. When he’s feeling particularly mischievous, he tends to try and sneak in.”
“Why…” So many whys. “Why do you have a goat who sneaks in through a dog door?”
“Long story. Will you finish with the eggs while I get him back outside where he belongs?”
“Yeah. You grab the goat, and I’ll fix the eggs. This is totally normal.”
She laughed. Such a pretty sound. Oddly comforting. Strange to realize it was something he hadn’t had enough of in the past ten years—pretty women laughing.
“If you came here looking for normal, boy, you came to the wrong place,” she said, sounding mostly amused.
She lunged for the goat then, and Alex watched with morbid fascination. She got her arms around its neck, but it bleated and kicked and Becca swore.
“You’re feisty today, Ron. I really don’t like it when you’re feisty,” she muttered to the goat.
To. The. Goat.
The goat bucked again and Becca lost her grip as she dodged the kick. The goat took off toward the kitchen. Without thinking the action through, Alex made a move to block the hallway, but the goat was a tiny, little thing and darted right between his legs.
“The hell?”
“Goats are very smart,” Becca replied, hurrying past him. “We better get him before he eats everything.”
“Again, how do you have a goat that goes through the doggie door?”
“It’s a—”
“Long story, right.” He followed her to the kitchen, his long strides easily matching Becca’s jog.
Back in the kitchen, Gabe was standing in the corner by the stove looking wide-eyed and horrified. Alex could hardly blame him. The damn animal was now standing on top of the kitchen table.
“Why the fuck is there a goat on the kitchen table?” Gabe asked, all but pressing himself into the corner of the counter.
“You’re more afraid of a goat than a sniper?” Alex asked, grinning.
“Damn straight. I know what the hell to do with a sniper.”
“He’s mostly harmless, just desperate to be human,” Becca said, calmly studying the goat.
Alex didn’t know how to feel about this except baffled and entertained all at the same time. “With a name like Ron Swanson, I can’t say I blame him.”
“Do they bite?” Gabe demanded.
Becca laughed again, and Alex didn’t fail to notice Gabe had much of the same reaction he did—a startled look at Becca. Then a little bit of a smile at the sound.
It was a strange moment, all in all, to feel with a true, bone-deep certainty he’d done the right thing and come to the right place. He didn’t often let himself doubt it, but they needed this—laughter and home. Even if it meant a goat on the kitchen table.
“All right. Who’s going to help me grab him?” Becca asked.
Alex felt a certain lightness that had definitely been missing for a while. “Since Gabe’s a coward, I think it’ll be me.”
She pressed her lips together like she was trying not to smile as she stood next to one corner of the table. Alex situated himself across from her. Her gaze met his over the body of the miniature goat.
She grinned, a full-on grin he would never have expected from her.
“Welcome home, Alex,” she said, green eyes dancing with humor.
He could only laugh.

Enter to win a copy of Outlaw Cowboy by Nicole Helm!

Nicole Helm grew up with her nose in a book and a dream of becoming a writer. Luckily, after a few failed career choices, a husband, and two kids, she got to pursue that dream. Nicole writes down-to-earth contemporary romance. From farmers to cowboys, midwest to the west, she writes stories about people finding themselves and finding love in the process. When she’s not writing, she spends her time dreaming about someday owning a barn. She lives with her husband and two young sons in Missouri. She is slightly (okay, totally) addicted to Twitter (@nicolethelm), the St. Louis Cardinals, and someday owning a barn.