First love is better the second time around.

Matt Osborn had no idea coaching his five-year-old nephew’s soccer team would get him so much attention from the mothers-attention he doesn’t want now that he’s given up on love and having a family of his own. Yep, Matt’s the last of his bachelor buddies, and plans on staying that way. That is, until he finds himself face-to-face with the woman who broke his heart.

Single mom Anna paused her life in England to help her father recover from an illness. She can’t afford complications, and too-hot-for-his-own-good Matt Osborn-her almost former fiancé-is definitely a complication. He’s a reminder of what might have been-or should have been. That irresistible pull between them isn’t over. Not even close. But if she’s not careful, she’ll break both their hearts . . . again.

What would make her happy was standing right in front of her, and she was struggling to remember why this was a bad idea. “I have an appointment at one,” she said. “Another assisted living center tour. With the friend you recommended.”
“We can work around it.”
She should turn him down. She knew she should, so why was she saying, “Okay.”
He smiled, looking more like good-natured Coach Matt and not Alpha Male Matt, the man she’d gotten to know well in her bed twelve years ago.
Damned if she didn’t want Alpha Matt.
He was less than two feet from her, watching her with an intensity that suggested he knew he was making her squirm and loving every minute of it.
“Great,” Matt said, as though he hadn’t made the air temperature rise twenty degrees just from the timbre of his voice. “If you want, Toby can stay with us when you go to your appointment, and then we’ll all go after you’re done.”
“Yeah.” It was a great plan, but standing this close to him made her nervous. She didn’t trust herself to walk out the door without doing something foolish, like kiss him, because right now that seemed like a real possibility. “I should go.” She took a step back and lost her footing.

Matt reached for her, snaking an arm around her back and pulling her upright against him.
Anna sucked in a breath at the contact. Her hands rested on his chest, and she realized it was just as solid as she’d remembered. Shivers ran up her arms and she found herself molding her body to his.
His hand stayed in place on her back, pulling her even closer.
She knew she should back away, but she wanted this, wanted him, and that was dangerous. She was a mother now. Her son had to come first.
“I can’t stay, Matt,” she said again, feeling like a broken record, but she had to make sure he didn’t feel deceived by her again. He deserved full honesty. “I have to think about Toby. I can’t hurt him.”
He looked surprised. “Anna, I would never willingly hurt Toby.”
“But this…us…if we do this…” Did she confess her son’s deepest desire for a father to love him and her worry that this would only confuse him? Was it her secret to tell? “I have to think about Toby. And Ethan.”
“We’re not going to hurt them, Anna.”
“We might. If we get too close.” I might get hurt if we get too close.
Too late for that…
He kept his hand on her back, and lifted the other to the side of her neck. He didn’t answer, at least not with words. He lowered his face, his lips gently brushing hers.
Her breath caught. His touch was like a jolt of electricity to her heart, bringing her back to life. 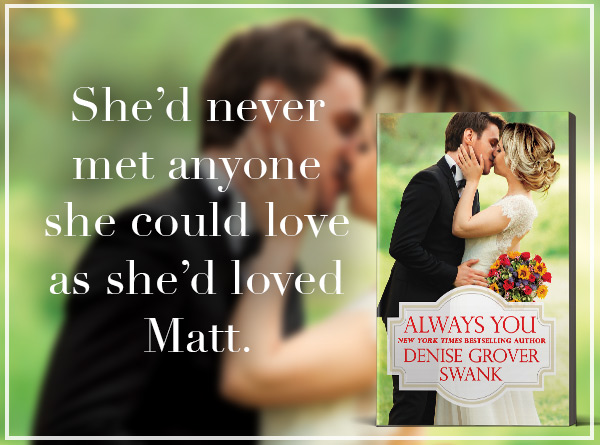 New York Times and USA Today bestselling author Denise Grover Swank was born in Kansas City, Missouri and lived in the area until she was nineteen. Then she became a nomadic gypsy, living in five cities, four states and ten houses over the course of ten years before she moved back to her roots. She speaks English and smattering of Spanish and Chinese, which she learned through an intensive Nick Jr. immersion period. Her hobbies include witty (in her own mind) Facebook comments and dancing in her kitchen with her children. (Quite badly if you believe her offspring.) Hidden talents include the gift of justification and the ability to drink massive amounts of caffeine and still fall asleep within two minutes. Her lack of the sense of smell allows her to perform many unspeakable tasks. She has six children and hasn’t lost her sanity. Or so she leads you to believe