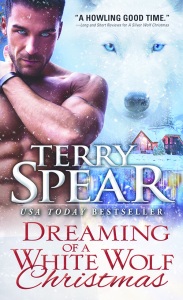 May all your Christmas wolves be bright…

Romance writer Candice Mayfair never missed a deadline in her life—until the playful bite of a werewolf
puppy accidentally turns her into an Arctic wolf shifter. Talk about a life-changing event! Candice is at
the end of her rope with the unpredictable shifting, a strong desire to howl, and the need to vacuum
constantly to keep the shedding fur under control.

Enter werewolf private investigator Owen Nottingham. Owen has a new mission: convince the pretty
she-wolf she needs to join his pack in time for Christmas…and be his mate. It’s the only way he can think
of to keep her safe…

A fun little story perfect for the Christmas season. Candice was realistic in how she coped with her new reality, and Owen was eager to help. It included shifters we’ve met in past stories and tied it all together with ease. It seemed a little forced and didn’t flow as easy as some of her past books, but I enjoyed it.

*Review copy provided by NetGalley in exchange for an review. 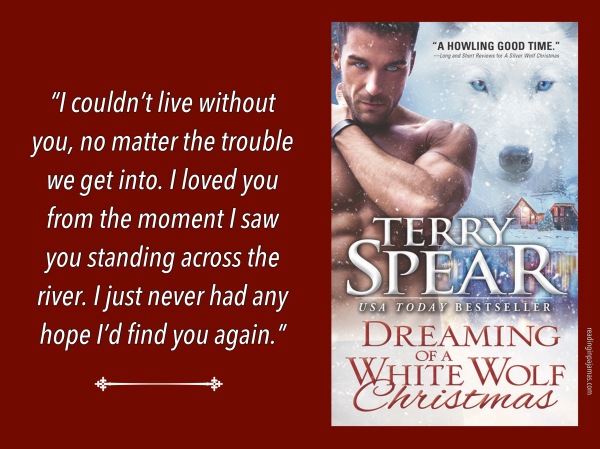 Candice had been writing for two days straight, working on her publisher’s book deadline, when she wrote the ending, smiled, and set the book aside. She would start proofing it tomorrow after she’d given her brain a break. Now she’d do what she always did when she finished a book or reached a good stopping point in one. Clean house. Check her backlog of emails. Pick up some more groceries. And take a run on the wolf side.

She finished vacuuming and dusting, swearing every window must let in all the outdoors, and then started a batch of gingerbread cookie cutouts to celebrate the Christmas holiday season and finishing another book. While they were baking, she finally settled down to check her emails. Fan mail always came first, and one from her website got her attention right off. She opened it and read:

Hello, I’m Owen Nottingham, private investigator for White River Investigations, White River Falls, Minnesota. My client, Strom Hart, hired me to locate you. Your parents, John and Cynthia Hart, left you an inheritance, and you need to see the lawyer about it so you can claim it. I need to verify that you are the right woman first. Is there any way we could meet and get this taken care of so you can collect your inheritance? Strom Hart will be the one to receive it by the end of the month otherwise. His assistant, Jim Winchester, said Mr. Hart is your uncle.

Candice reread the message, not believing her eyes, tears filling them. She quickly looked at the date of the message. Two days ago! She knew she shouldn’t have neglected her emails, but when she was into a story, she couldn’t break away.

She ground her teeth, raised her fingers to respond, and heard a knocking at her door. No one came here. Never. Ever. Not even salesmen.

She glanced at her phases-of-the moon calendar. The waxing gibbous was just beginning. She should be fine. Just to be on the safe side, in case the person at the door was trouble, she pulled a can of mace from her desk drawer and headed for the door. She peered through the peephole. Waiting at the door was a handsome black-haired man with rugged features and intense blue eyes. He was dressed in a black suit, a red shirt, and a dark-purple tie covered in red, purple, and gold Christmas balls. She raised her brows.

“I’m Owen Nottingham,” he said to the door, holding up his PI license and driver’s license. He couldn’t know that she was watching him, so he must have hoped she was there, observing him. “I tried getting ahold of you through the contact form on your website about your inheritance. Your contact form might not be working, so I had to locate you in person.”
So this was the man who had sent the message. Was he for real? He had to be. He wouldn’t have come all this way to see her if he wasn’t. But how had he found her?

Candice opened the door, the bells jingling on her Christmas wreath, and the man glanced down at the can of mace in her hand. He smiled, his gaze holding hers with such intensity that it was as though he could see clear through to her soul. “Really, just a PI doing my job.”

A chilly breeze carried his scent to her. Wolf scent. All at once, she felt so light-headed that she grabbed the door to keep herself upright and dropped the can of mace on the tile floor. It clattered, but she couldn’t have reached for it if her life depended on it.

He took a deep breath at the same time, and when he smelled her scent, his eyes widened in surprise. His hand shot out to grab her arm and steady her. For a minute, she tried to control her breathing and her heart rate, neither of which she could steady. She felt like she was going to pass out.

“Hell, you’re the wolf I saw across the White River, aren’t you?”

Her jaw dropped, and her knees buckled. He swept her up in his arms and she wanted to object, but he slammed the door behind him with his hip and carried her into the house. He was the wolf she’d seen across the river that day on the camping trip in Minnesota two years ago, sipping from the water? She still remembered it like it was yesterday. Him looking up and seeing her staring at him while she’d believed she was hallucinating.

Until the next night, and then she knew she hadn’t been dreaming at all. 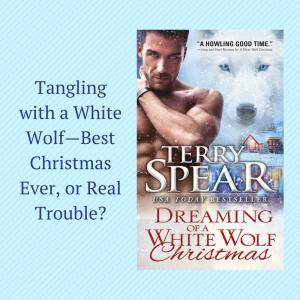 USA Today bestselling author TERRY SPEAR has written over 35 paranormal romances featuring werewolf and jaguar shapeshifters. In 2008, Heart of the Wolf was named a Publishers Weekly Best Book of the Year. A retired officer of the U.S. Army Reserves, Terry also creates award-winning teddy bears that have found homes all over the world. She lives in Spring, Texas.