BURN FOR YOU (Slow Burn Book 1) by J.T. Geissinger 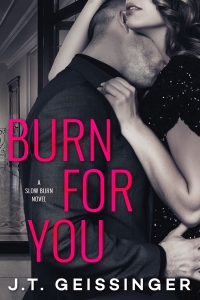 The marriage is fake. But for a sassy chef and an arrogant billionaire, the sparks are real… Jackson “The Beast” Boudreaux is rich, gorgeous, and unbelievably rude to the staff at Chef Bianca Hardwick’s New Orleans restaurant. Bianca would sooner douse herself in hot sauce than cook for Jackson again, but when he asks her to cater his fund-raiser, Bianca can’t refuse, knowing the cash will help pay her mother’s medical bills. Then Jackson makes another outrageous request: Marry me. The unconventional offer includes an enormous sum—money Bianca desperately needs, even if it does come with a contract—and a stunning ring.

The heir to a family bourbon dynasty, Jackson knows the rumors swirling around him. The truth is even darker. Still, he needs a wife to secure his inheritance, and free-spirited, sassy Bianca would play the part beautifully. Soon, though, their simple business deal evolves into an emotional intimacy he’s built walls to avoid.

As the passion heats up between them, Bianca and Jackson struggle to define which feelings are real and which are for show. Is falling for your fake fiancé the best happy ending…or a recipe for disaster?

This time it was me who froze in shock when our lips came together. It took him several long moments of gentle coercion with his tongue before I finally opened my mouth. When I did, it was on a soft groan that he stole when he inhaled.

He was so big, and warm, and hard everywhere, except for his mouth, which was like cotton candy. I melted into it. He slid his thumb under my ear, and I shivered. His fingers pressed into my scalp. When he sank his teeth gently into my lower lip, lightning flashed through me.

I fisted my hand into the scruff of his neck and pulled him closer.

Suck, slide, nip, repeat, feel your pulse in all the hidden places in your body. This kiss was cashmere. It was luxuriant. It was decadent, unhurried, sweetly delicious, like stretching out on warm sand and drinking a mai tai. His scent was in my nose: pine and musk and something earthy and fresh, the way the woods smell after it rains.

He made that masculine sound deep in his throat that I found weirdly thrilling and pressed his hand into the small of my back. It brought our lower bodies together and provided me with impressive evidence that Jackson Boudreaux was anything but nonsexual.

His laugh was soft and dark. “Yes, oh. Stop talking.”

I couldn’t catch my breath, but it didn’t matter because his lips were on mine again. Little puffs of air through my nose would have to sustain me.

His hand in the small of my back became the iron band of his arm around my waist. My nipples tightened. His heartbeat crashed against my chest. The kiss turned from slow and sweet to hard and hot, first melting me and then lighting me on fire.

He tangled his hand into my hair, pulled the clip loose that held it all in place, and let it fall to the floor. He made that sexy, manly noise again when my hair spilled into his fingers. I fought the urge to press my hips against his, then softly moaned in relief when he did it for me, one big paw cupped under my bottom. Yes, yes, yes, thrummed my heart, aching for more.

He broke away, breathing heavily. My eyes drifted open. He stared down at me with a look like he might devour me.

Good thing I was in the mood to be devoured.

See the BURN FOR YOU teaser trailer: https://youtu.be/nXDba2hRr44

A former headhunter, J.T. Geissinger is the author of more than a dozen novels in contemporary romance, paranormal romance, and romantic suspense.

She is the recipient of the Prism Award for Best First Book, the Golden Quill Award for Best Paranormal/Urban Fantasy, and is a two-time finalist for the RITA® Award from the Romance Writers of America®. Her work has also finaled in the Booksellers’ Best, National Readers’ Choice, and Daphne du Maurier Awards.

Join her Facebook reader’s group, Geissinger’s Gang, to take part in weekly Wine Wednesday live chats and giveaways, find out more information about works in progress, have access to exclusive excerpts and contests, and get advance reader copies of her upcoming releases.