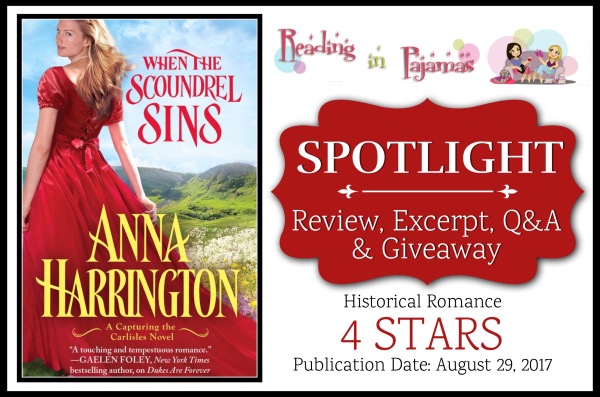 WHEN THE SCOUNDREL SINS (Capturing the Carlisles, Book 2) by Anna Harrington 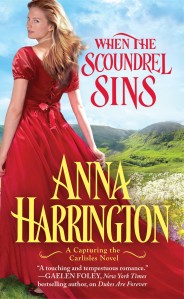 Six years ago, a childish prank perpetrated by the reckless Quinton Carlisle ruined Annabelle Greene’s reputation and any chance she had at securing a successful marriage. Incensed, she moved to her beloved estate on the Scottish border and has reveled in the solitude…until now when the contents of a family will are revealed. Suddenly, Belle’s single status may cost her the only home she’s ever known. Now, with her only marital prospect a horribly greedy and completely undesirable man, Belle knows just the person to rescue her-the one person who owes her for his bad behavior…

There’s nothing Quinn Carlisle wants more than to get out from his older brother’s shadow and make a name for himself abroad. So when a mysterious letter arrives, promising adventure, he rushes to the Scottish border…only to find that Belle laid a trap for him. The awkward, shy bluestocking whom he so enjoyed tormenting is gone, replaced by a graceful, elegant woman who ignites a desire in him he can’t resist. Can Quinn help her save her home-and win her heart in the process?

“You look much more like your father now,” she commented, nervously licking her suddenly dry lips but only serving to draw his attention to her mouth. Which made her even more nervous, so nervous that she couldn’t stop the trembling of her fingertips as they wrapped into the skirt of her night rail. “But you’re still a troublemaker.”
A faint smile played at his mouth. “And you’re still a bluestocking,” he countered. Unintentionally simmering a slow heat low in her belly, he reached up to tuck a stray curl behind her ear. “Still retreating to the sanctuary of your library.”
“Because books are usually more pleasant than most people,” she answered, swallowing hard when he trailed his fingers down the side of her neck. She forced out, not at all as firmly as she’d hoped beneath the soft touch of his fingers,
“And more trustworthy.”
Ignoring that jab, he slid his hand lower to let his fingers play at the edge of her shawl. “Yet there are things that people can do that books can’t.” His fingers tugged gently at the shawl and pulled it down her shoulder to reveal the scooped neck of the nightdress beneath. His gaze flicked to the small patch of revealed skin at the base of her throat, then back to her eyes. “All kinds of interesting things.”
She should stop him, swat his hand away, shove him back—but she couldn’t bring herself to do it. Just as she couldn’t hold back the hot shiver that swept through her or the gooseflesh that formed on her skin. His touch was proving to be as equally intoxicating now as that night six years ago.
“Then I have no interest in learning them,” she countered, although from the way her blood hummed, her body was very interested.
Madness—that after what he’d done to her, she could ever want to be in his arms again. Yet she desired just that, although that could never happen. Kissing him once had ruined her reputation. Kissing him again might destroy her entire future.
She thrust her chin into the air. “I know of your reputation.”
“Thank you,” he half purred.
His finger hooked beneath the wide shoulder strap of her sleeveless nightgown and slid it slowly down her arm. But this time, with a stretch of bare shoulder revealed to his eyes, he didn’t bother feigning propriety by looking away and instead flamed a prickling heat beneath her skin everywhere he gazed.
She pulled in a deep breath to steady herself. Oh, why did she always go light-headed when she was alone with him?
“That was not meant as a compliment.”
“Wasn’t it?”

This was such a fun historical romance! I really enjoyed it. WHEN A SCOUNDREL SINS is the second book in Anna Harrington’s Capturing the Carlisles series, but you do not need to read the first book before picking up this one. Each book is a standalone and I haven’t read the first book. WHEN A SCOUNDREL SINS was a fun and sexy historical romances with likeable characters. I wanted to shake the characters a few times when they weren’t doing what I wanted them to, but I loved them. The chemistry Quinton and Annabelle was sizzling and I enjoyed their journey to happily ever after. It’s a great book to curl up with and get lost in for a while. I recommend this book for romance lovers looking for a fun historical romance. I’ll definitely be picking up Anna Harrington’s future releases. 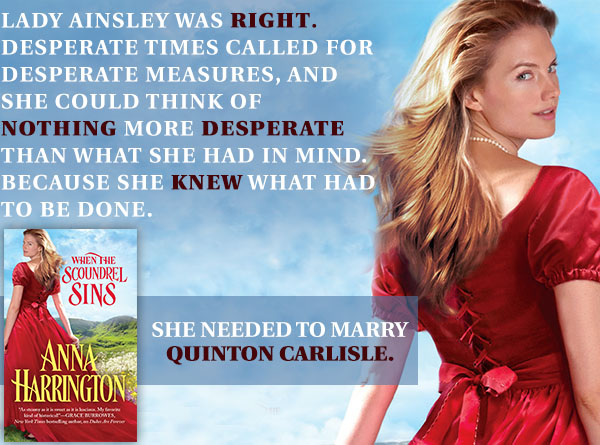 1. What did you edit out of this book?
— This book is pretty much a complete rewrite from the version I originally gave my editor, and only about 25% of it remains. In the original version (Spoilers!), Belle is actually engaged to Bletchley when the book starts, and it’s Quinn who kidnaps her away to Scotland at the end. The part about Belle’s father was all added during the revision, and I had to eliminate both a scene in which they make love in the heather and a scene in which Quinn rides to Lincolnshire to speak directly to Sebastian about buying the property, which in the final version became only a letter.

2. What genres do you enjoy reading?
— My favorite romances are Regency romances, and some of my favorite writers Suzie Enoch and Elizabeth Hoyt, although I’ve just discovered Teri Wilson’s contemporary romances and have devoured all of her Drake Diamonds series. I love reading plays and also historical books about architecture, fashion, etc.—real history is filled with the best stories!

3. Do you have any writing rituals or publication day rituals?
— I have to write with a cup of coffee in the morning and a cup of tea in the afternoon, with jazz music playing in the background—instrumental only, not any singing as the lyrics distract me and make me want to sing along!–and I have to write either on the porch or in the dining room, where there are lots of windows to make me feel as if I am outside. (In the winter, I’ll even curl up beneath an electric blanket just so I can write outside.) On release day, I always pop a bottle of real champagne and usually host a Facebook party for my readers.

4. Have you traveled to the places you feature in your books?
— I was fortunate enough to have lived in London when I was in my early twenties, and I fell in love with England, so much so that I cried the entire way back across the pond. I got to see so many wonderful places that have inspired settings in my books, including Hampton Court, the Brighton Pavilion, Hyde Park, the theatres, Oxford, Bath…I hope to retire there, in a little flat in Richmond. Other places in the US have also inspired the grand houses and gardens where I set my books, including Biltmore, the Swan, and the “cottages” in Rhode Island.

5. Do you have a favorite romance hero from your books?
— I suppose that I’ve fallen in love with all of my heroes…can I combine all of them together into the perfect man?? Seriously, though, my favorite so far is Quinton Carlisle from WHEN THE SCOUNDREL SINS. He’s not the usual Regency alpha male, even though he doesn’t want to fall in love—but *not* for the reason you think! Instead, he’s a pure charmer with a heart of gold, who genuinely wants to help Belle and give her the home she deserves, but at the same time, he stirs her passions. (Spoilers!) When he gives her the rope of pearls as a pre-wedding gift, a family heirloom that is to be passed down to their children, we see how much family means to him and how much he wants to create his own family with Belle. As a hero, he has me both laughing and crying at the same time, and he does it all with a rakish grin.

10 copies of IF THE DUKE DEMANDS 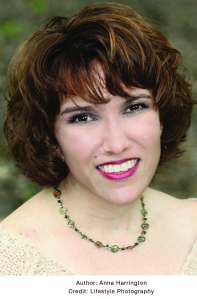 Anna Harrington fell in love with historical romances–and all those dashing Regency heroes–while living in London, where she studied literature and theatre. She loves to travel, fly airplanes, and hike, and when she isn’t busy writing her next novel, she loves fussing over her roses in her garden.