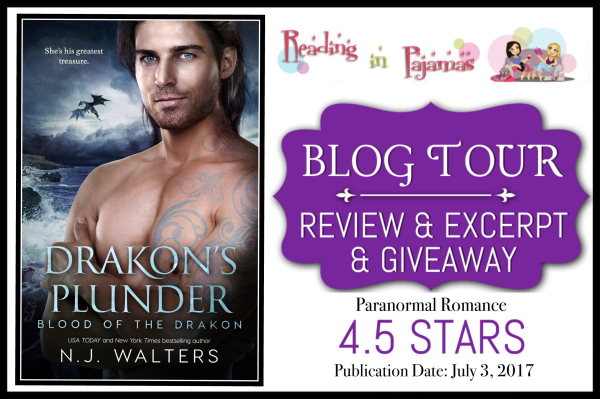 DRAKON’S PLUNDER (Blood of the Drakon, Book 3) by N.J. Walters

Life is not going well for archaeologist Sam Bellamy. She’s stuck in the middle of the ocean on a salvage boat with people who want her dead. It wasn’t her gift for being able to sense objects of power that got her here, rather her need to make a secret society called the Knights of the Dragon pay for killing her mentor. Sam doesn’t believe in dragons, but the Knights do, and if she can get one of the sacred artifacts they’re searching for away from them, she’ll consider it payback.

Ezra Easton is content to run his marine salvage company and live alone on his private island. He may be a four-thousand-year-old water drakon, but he’s civilized enough to know just because he pulls an injured woman from the ocean, doesn’t mean he gets to keep her…

When she wakes up, she has a few tall tales to share, and it seems the Knights are after her. But this drakon won’t give up his treasure.

Every time I pick up a book in this series I fall more in love with these drakons! I loved Ezra! DRAKON’S PLUNDER is the third book in N.J. Walters paranormal series, Blood of the Drakon. DRAKON’S PLUNDER is Ezra, a water dragon recluse, and Sam, an archaeologist’s story. Danger, romance and sexy dragons…I loved it! N. J. Walter’s paranormal world of drakons (half dragons/ half men) and knights, set in present day, is unique and exciting. I can’t wait for the next brother’s book and I’m hoping there are more drakons introduced in the series so it can continue. I’m obsessed with these dragons and I highly recommend this series for paranormal fans!

“You have no idea who is looking for me.” She shoved the blanket aside and sat up. It was time to get dressed, if she still had any clothes, and get out of here. “These people are dangerous and will stop at nothing to find me. If they don’t find a body at the wreck—” She broke off before she said too much.

“So you were in a wreck. I wondered why you were alone in the dinghy. And who is after you?” He stood, looming like a large, avenging angel over her. “You can trust me to protect you.”

“You might be willing to risk yourself, but I’m not. I need to leave. Where are my clothes?”

As though she hadn’t spoken, Ezra continued. “You must be thirsty. Hungry, too. I’m starving. How about I make some bacon and eggs? Maybe some pancakes and toast.” He left her standing there and padded barefoot into the kitchen. Why did she find it so sexy that he was barefoot?

She was obviously not thinking straight, otherwise she wouldn’t notice the way his long hair brushed his shoulders or the way the soft denim cupped his behind as he walked away. Her toes curled against the rug.

She snatched up the throw blanket, wrapped it around her, and hurried after him. “Didn’t you hear anything I just told you? It’s not safe for you if I’m here. The people looking for me will kill you.”

Ezra pulled a carton of eggs, butter, and a package of bacon out of the refrigerator and set them on the counter. He added a box of pancake mix and a bowl to his collection before getting several large skillets out of the cupboard.

Ezra propped his hands on his hips and faced her. “Not if I kill them first.”

N.J. Walters is a New York Times and USA Today bestselling author who has always been a voracious reader, and now she spends her days writing novels of her own. Vampires, werewolves, dragons, time-travelers, seductive handymen, and next-door neighbors with smoldering good looks—all vie for her attention. It’s a tough life, but someone’s got to live it.