JUST THE THING (The Donnigans) by Marie Harte

Gavin Donnigan left the Marine Corps a shell of a man, hounded by guilt for deaths he couldn’t prevent. But teaching a self-defense class at the local gym brings some stability to his life—along with a gorgeous leggy woman who won’t give him the time of day.

Zoe York lost her twin sister to a freak car accident a few months ago. She’s been struggling to bury her grief, but it isn’t until she signs up for a self-defense class with its distractingly hot instructor that she begins to come out of her shell again. With the memory of her sister telling her to live a little, Zoe decides a fling with buns-of-steel Gavin Donnigan might be just the thing.

Soon they’re sparring both in and out of the gym. And for the first time in a long time, each is looking forward to tomorrow. 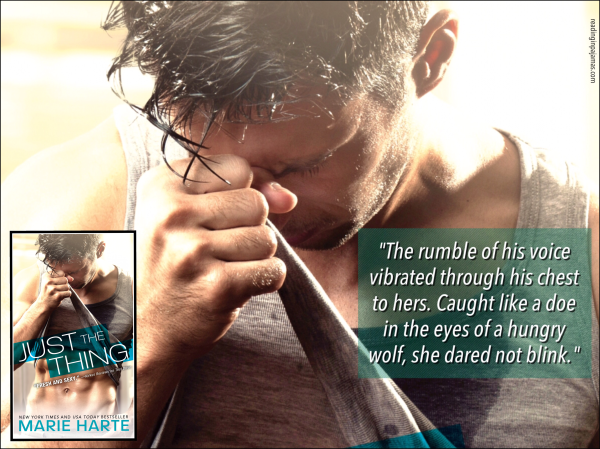 Award-winning author Marie Harte has been writing professionally since 2005. She’s both a NY Times and USA Today bestselling author and has written over 100 books and counting. Marie writes books with heat, humor, and character.

She writes independently and for several publishers, to include Sourcebooks and Samhain. Though currently writing contemporary romance, she also writes paranormal and romantic suspense.

Before turning to writing full-time, she earned a B.A. in English from Pennsylvania State University and spent several years in the United States Marine Corps as a communications officer.

Marie currently lives in Central Oregon with her family. There’s nothing she likes more than finding a good book to read and a great cup of coffee to drink.