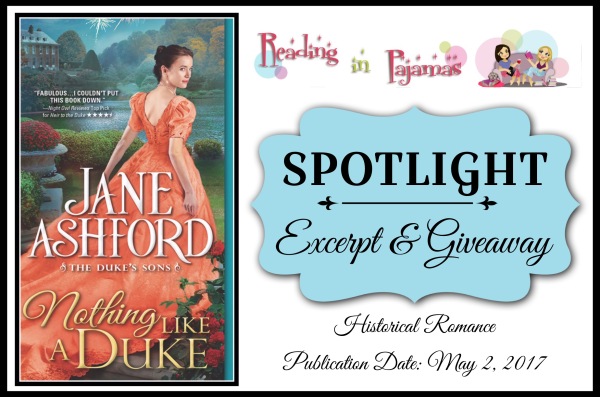 NOTHING LIKE A DUKE (The Duke’s Sons, #4) by Jane Ashford 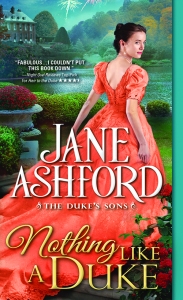 He wants her.
She has no intention of wanting him.
But even Flora has to admit…
There’s nothing like a Duke.

Lord Robert Gresham has given up all hope that the beautiful and independent Flora Jennings will ever take him seriously. He heads to an exclusive country house party to forget about the beauty haunting his thoughts.

Too bad the lady in question has no intention of being forgotten. 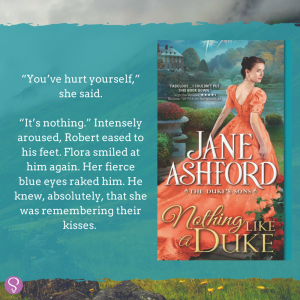 A protruding bit of bramble caught the side of Flora’s pelisse. She twisted to reach for it, and a whole raft of briars shifted with her, entangling the other side of her skirts, her right arm, and the brim of her bonnet. If she pulled away, it would rip the cloth. She struggled a little; more thorns dug in. “Blast it, I suppose you were right, you wretched dog,” she exclaimed, and discovered that Plato was gone.
Flora lifted a hand to free her hat. The movement tipped another part of the bush, which swayed and seemed to grab at her. A second branch lodged in her bonnet. She felt several claw at her back. A stem lashed across her neck. That one drew blood. She tried to step back, and was pricked by more thorns, through her clothes, from all directions.
Flora went very still. She saw that the path petered out just ahead. Or perhaps this hadn’t been a path at all, but merely a deceptive opening in the vegetation. She hadn’t been paying attention. She tried again to move. She was trapped in a sea of briars. The thorns were long and wickedly barbed. They pricked the skin of her neck, her arm, her back, her side.
She became aware of a rustling in the leaves near her feet. What next? The badgers? Snakes? No, of course not snakes. It was far too cold.
A small black-furred head poked through an opening at the base of the briars. Evading the thorns with no visible effort, Plato emerged and stared up at her. “Oh, you’re back, are you?” said Flora. He sat down at her feet. “Come to gloat? Point out that if I’d followed you, I wouldn’t be in this predicament?”
Plato looked at her. Not judgmentally, because that was impossible.
“Go fetch help,” commanded Flora. The dog didn’t move. “Some clever gardeners. A footman from the house. Anyone. Go!”
“Plato? Where are you, you dratted animal?” called a voice nearby.
“Lord Robert?” she called.
There was a short silence. “Flora?”
“Yes. I’ve, ah, become entangled in some brambles. Plato doesn’t appear to care in the least. Or, actually, he’s staring at me as if it was all my fault.” She frowned down at the dog. “Does he ever blink? He’s really a bit uncanny, don’t you—”
Robert appeared on the path. “Good God!” He started forward.
“Be careful! It’s very easy to get caught. If you touch one branch, the whole mass moves.”
“I see.” He examined the arching stems. “You really are caught, aren’t you?” His lips twitched.
“If you laugh, I’ll…make you sorry,” Flora promised. Plato made one of his odd grumpy gargling sounds. “And you! I’ll find a badger and hand you over to him.”
Robert choked. “So, would you say you’re in need of rescue?”
“Just get me out!”
Robert moved a few steps closer. He could see that the thorns had barbs like fishhooks, ready to rip and tear if not removed very carefully. There was a trickle of blood on Flora’s neck. After a moment of calculation, he eeled between two branches. He had to stop once and detach thorns from his sleeve before he reached her side.
“These things are diabolical,” she said. “When I turned to pull loose, they seemed to…sort of lunge at me.”
“Stay very still.”
“I know!” She let out a huff of breath. “I beg your pardon. This is…rather irritating.” She smiled an apology.
Robert felt a catch in his chest, as if his heart had stumbled briefly. “Right then. Move back, Plato,” he said. For once, the little dog obeyed him, slipping easily out to a more open spot.
He began on the closest branch, embedded in the skirts of Flora’s pelisse. He had to kneel to reach it properly. His knife was small for the tough fibers. The bush swayed as he sawed at the branch. A spray of thorns rasped across his hair, but didn’t catch hold.
Robert soon pricked his skin. There was no way to hold the branch still without being stuck, and he’d left his gloves indoors when he’d seen Plato shoot wildly out of the bushes and then go haring off again.
Blood made the blasted thing slippery. Robert got out his handkerchief, used it to wrap the branch, and went back to work. At last, he was through. The severed stem sprang back a little, he was glad to see, giving him a few inches of working room. He looked up. “One down,” he said with a smile.
The heated gaze he encountered went through him like a thunderbolt. He was suddenly acutely aware of his position, right in among her skirts. His shoulder rested against her thigh. The scent of her—flowery perfume and sheer female—enveloped him.
“You’ve hurt yourself,” she said.
“It’s nothing.” Intensely aroused, Robert eased to his feet. Flora smiled at him again. Her fierce blue eyes raked him. He knew, absolutely, that she was remembering their kisses.
The next branch was wrapped around her far sleeve. He had to press close to her to avoid the briars at his back as he reached for it. And stay there while he cut through the stringy fiber of the bramble. The feel of her—curve of breast and hip, her cheek resting on his chest—made him clumsier. At one point a thorn drove deep into the pad of his index finger, and he stifled an oath.
Flora was having trouble breathing. She could feel his heartbeat, so near her ear, accelerating in tandem with her own. She could feel his muscles shift against her as he cut at the brambles. If she looked up, carefully, she could see his face—handsome, intent. The lips that had thrilled her were only inches away. But she couldn’t move enough to offer her own again. She had to remain very still, plastered against him.

Enter to win one of five Jane Ashford bundles! 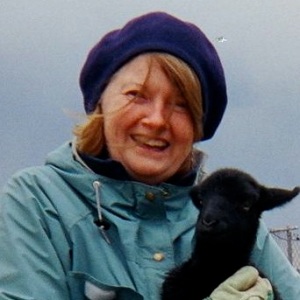