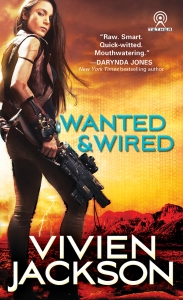 A rip-roarin’ new snarky, sexy sci-fi paranormal romance series with the perfect balance of humor, heat, and heart. Now that Texas has seceded and the world is spiraling into chaos, good guys come in unlikely packages and love ignites in the most inconvenient places…

Rogue scientist • technologically enhanced • deliciously attractive
Heron Farad should be dead. But technology has made him the man he is today. Now he heads a crew of uniquely skilled outsiders who fight to salvage what’s left of humanity: art, artifacts, books, ideas—sometimes even people. People like Mari Vallejo.

Gun for hire • Texan rebel • always hits her mark
Mari has been lusting after her mysterious handler for months. But when a by-the-book hit goes horribly sideways, she and Heron land on the universal most wanted list. Someone set them up. Desperate and on the run, they must trust each other to survive, while hiding devastating secrets. As their explosive chemistry heats up, it’s the perfect storm…

Who is your favorite supporting character from Wanted and Wired, and why?

I tend to get really into my characters. Like, I talk to them when I’m alone. They talk to each other, in my voice. Sometimes they wake me up in the middle of the night and demand to be heard. No, that’s not creepy at all. What?
I’ve fallen in love with every single one of them—even the villains, to my shame—and I really, really hope I’ve captured a particle of their awesomeness on the page. But there’s one character I’ve especially wanted to pull over and invite to sit beside me, to keep safe through all the bad stuff going on in their world. To care for and protect.
Chloe.
I’ve always been a sucker for the nonhuman in the mix: Data in Star Trek: The Next Generation, Roy Batty in Blade Runner, David in Prometheus (rowr). These guys all long sort of desperately to claim things that we all take for granted: emotion, history, connection, life.
In Wanted and Wired, that character is Chloe. She aches to be a real woman, but doesn’t even have a real body of her own. (Women are more than their bodies, right? But she doesn’t know that. Yet.) She’s a nanite cloud, a consciousness that shouldn’t exist. In a way, she’s like another of my favorite outsider characters, Alia Atreides from Dune. Because laws prohibit unauthorized experimentation with nanovats, Chloe is illegal, an abomination. She is both hunted and feared. It’s hard not to want to protect the character so many others want to destroy.
Especially when she isn’t bad. Not really.
Chloe personifies the world in chaos, trying to find its humanity, so if she falls or fails, in a way, everybody does. I wrote the first two books trying to see world events through her perspective, to get a top-down view of it. Or rather, an outside-in one. So when I got word that we were a go for making the third Tether book her story, my first thought was YES. My second thought was, well, that’s gonna be a challenge.
I’ll just give you a hint how it’s going: Chloe is the only character of mine who has ever made me cry.

VIVIEN JACKSON is still waiting for her Hogwarts letter. In the meantime, she writes, mostly fantastical or futuristic or kissing-related stories. When she isn’t writing, she’s performing a sacred duty nurturing the next generation of Whovian Browncoat Sindarin Jedi gamers, and their little dogs too. With her similarly geeky partner, she lives in Austin, Texas and watches a lot of football.