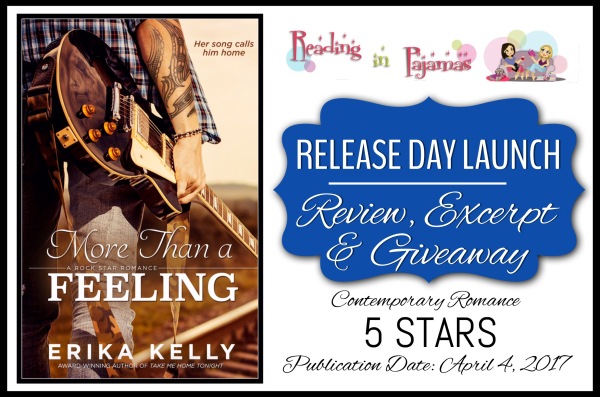 MORE THAN A FEELING: A Rock Star Romance Novel, Book 4 by Erika Kelly

From the award-winning author of TAKE ME HOME TONIGHT comes the final story in her red-hot Rock Star Romance series, about a loner rocker finding his perfect duet.

When Cooper Hood left Snowberry, Montana ten years ago, he swore he’d never go back to the town that painted him with the same brush as his addict mother. But right in the middle of his band’s national tour he gets a call to come home: his mom’s got a whopper of a secret to reveal.

Daisy Charbonneau’s in trouble. The talent she hired for her resort’s annual Huckleberry Festival just bailed on her, and she’s desperate to find a replacement act. Luck turns her way when she discovers her high school crush is back in town—and he happens to be a rock star.

As they work together, a crush deepens into so much more, but who falls in love in two weeks?

Especially when Cooper’s never coming back to town, and Daisy’s never going to leave it.

Cooper! Yay! I was so excited to read Cooper’s story and it was everything I wanted it to be with all the feels and smoking hot romance. I’ve been obsessed with Erika Kelly’s rock stars since I picked up the her first book. The series features beautiful love stories with hot rock stars. Each book in this series can be read as a standalone but I recommend starting at the beginning because each book features a different band member and Cooper has been in the previous books. Cooper’s book, MORE THAN A FEELING, is the fourth and final book in the series and I’m really going to miss the guys. This was a great conclusion though and I loved Cooper and Daisy together! I enjoy second chance romances and this was a great one about returning home and reconnecting with a high school crush. I highly recommend the entire Rock Star Romance series. It’s one of my favorite series and Erika Kelly is on my must read author list because she always delivers a great romance book that leaves me smiling and satisfied.  I can’t wait to see what she has in store for us next. Whatever she decides to write, I’ll be reading. 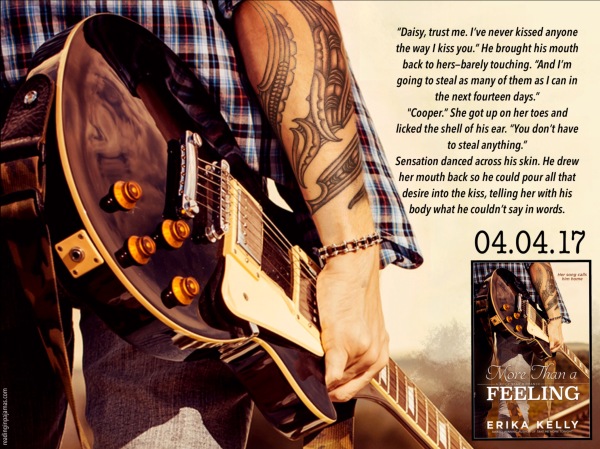 Daisy’s fingers trailed across his shoulders as she breezed past him. Her warm vanilla and honey scent swirled in her wake, and he felt like that boy all over again who’d lived in a state of hyper awareness around her. The boy who’d noticed the way her dark hair pooled onto the desk as she’d hunch forward to write, her fingers curled around a pencil. The way the tendons in her neck strained when she’d hit and held a high note. Her burst of laughter in the music room had made him stop whatever he’d been doing just to witness her joy.

He’d hoarded all those images, those sacred moments, to pull out and comfort him as he lay alone in the dark woods, waiting for his home to be safe enough to go back inside.

She would never know it, but she’d been his saving grace.

Taking her seat across from him, she set two little pots on the table. Her vivid blue eyes sparkled in the candlelight. “Try this.” She held a spoon out to him.

Letting her feed him was just too damn intimate, so he took it from her and fed himself. Creamy dark chocolate filled his senses. “Mousse?” Although it was denser, the chocolate more velvety. Richer. “It’s good.”

“It’s a Pot de Crème.” She scooped another mound for herself. Turning the spoon upside down, she brought it to her mouth, closing her eyes when her tongue touched the chocolate. She moaned, and her tongue swept across her bottom lip.

Desire surged through him, and he couldn’t help wondering if she’d look like that in bed. If she’d go all slack and dreamy-eyed when he sucked a nipple into his mouth.

His blood rose at the image of Daisy naked beneath him, back arching, her hands digging into his hair, holding him to her as if she never wanted him to go away.

She opened her eyes and licked the damn spoon. “I had my mom make it just for you.” The silky fabric of her shirt draped over her breasts, accentuating their round fullness. Desire pulsed through him.

Jesus, would you stop already?

“Let’s try this one.” She slid the edge of her fork into the cake, a cream-covered strawberry sliding out. “It’s my favorite.” The Montana sapphire studs glittered in her ears, and her lush mouth curved into a smile. His dick went hard.

He accepted the fork, but even when the cake and cream hit his tongue he couldn’t taste a thing. Because the only thing in his mind, heart, and body was the primal, urgent need to taste her.

All that teenage longing came roaring back. He wanted her more than ever. And not because she was beautiful and had a body his hands were dying to explore, but because every single cell in his body reacted to her. Wanted her. Yearned for her.

And this was why he’d never come back to Snowberry. He didn’t want to yearn for the things he couldn’t have. Didn’t want to wait for his mother to give him a crumb of her attention. Didn’t want to be around these people who’d only ever looked at him with disgust.

“What do you think? Delicious?” Daisy’s voice yanked him out of the negativity.

And he was damn glad. Because his past didn’t matter anymore. He was a man now. He’d made his way in the world. And he had a chance to be that man around Daisy. His gaze on her mouth, he said, “Hell, yes.”

Signed copy of YOU REALLY GOT ME, I WANT YOU TO WANT ME, and TAKE ME HOME TONIGHT for one winner