THE HARD WAY by Katie Ashley 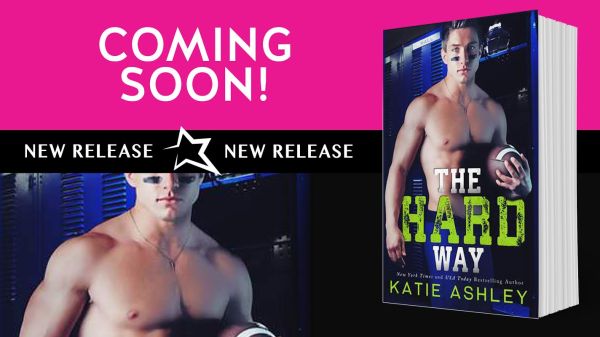 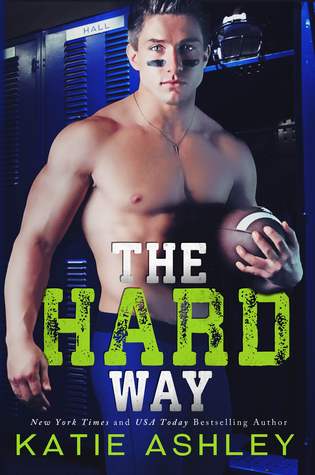 Cade Hall has always been the golden boy of the gridiron. Because of his talent at football, coupled with his father’s wealth, he’s always gotten his way. But when a night of drunken debauchery lands him in hot water with the college athletic board, neither his influential father nor his charming grin can save him. He finds it a total buzz kill when he is sentenced to community service with troubled youth at an inner-city shelter. But his nightmare is only beginning when his greatest high school regret is the very one in charge of the program, and she has him by the balls in more ways than one.

For Avery Prescott, senior year was a nightmare of epic proportions, and Cade Hall played the lead villain. After she fled her small town for college in the bright lights of Atlanta, she thought she had escaped the painful memories of her past. She never could have imagined Cade would waltz through the door of the outreach program she presided over. But Avery has news for Cade–she isn’t the same shy, doormat of a girl she was in high school. Since she holds Cade’s football future in her hands, she’s more than ready to make payback a real bitch.

Will the two stay in the defensive zone or discover that sometimes life’s greatest lessons are learned the hard way? 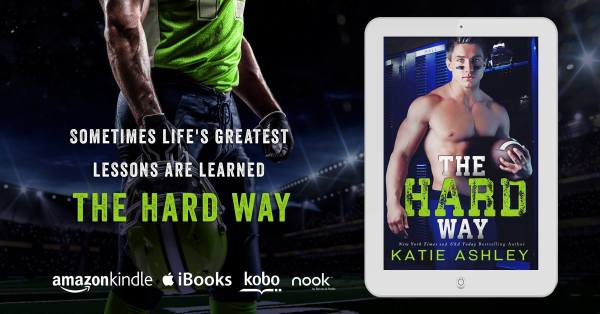 Fuuuuuuuuuck! This seriously was not happening. Just when I thought things couldn’t get any worse, apparently the universe didn’t just hate me. It fucking despised me. Not only was I stuck working forty hours a week at this shithole, but now I had the worst blast from my past standing before me. Avery Fucking Prescott.

In every “manwhore with seemingly no soul’s” world, there is one girl he regrets. One girl he thinks about from time to time. One girl he measures all the other ones against. One girl he even cries about when he’s shitfaced.

Mine was Avery Fucking Prescott.

I couldn’t help noticing that the Avery standing in front of me didn’t seem the same. Sure, she still had the same long, dark hair that she swept back in one of those ponytail things. Gone were the glasses, which made it a lot easier to see her green eyes that had flecks of gold in them. Of course, today there was pure and unadulterated hate burning in them directed at me where back in the day, there had been love.

But I had managed to kill that love by being a prick. Yeah, I’m sure you’re thinking that isn’t all too shocking based on the pure stupidity you’ve seen me exhibit so far. The thing is that Avery brought out the good that was buried deep down inside me. The good that you needed a fucking bulldozer to unearth.

While there were slight differences in her appearance, her entire personality seemed different, and no, I don’t mean just about how she hated me with a fiery passion. She wasn’t the wide-eyed, innocent farm girl who seemed so out of place at Harlington Prep. It was like she’d had a personality transplant. It reminded of me of what happened to my older sister, Catherine, the summer she turned fifteen, and my mother sent her off to some glamour school shit to detox the awkward out of her. When she came back a month later, it was like she had become a Stepford Kid. Catherine no longer took the time to play with me. She had “more important” things to do like contouring her brows or preparing for cotillions. Things were never the same between us after that.

My ego couldn’t help wondering if what had happened between us had caused the seismic shift in Avery. Like I’d broken the Old Avery with my actions, and this was what had been rebuilt in its place. But another voice rationalized that unlike me, Avery had probably gotten her shit together in the last three years. College had matured her.

After a few moments of a silent standoff, Avery said, “Hello again, Cade.” Her words might have been polite, but her voice was strained. I could tell it was taking everything within her not to go off on me.

“Oh, you two know each other?” Tammy or Theresa, or whatever the hell her name was, questioned.

But I knew I would mortify the hell out of Avery if I said anything like that in front of her boss. So instead, I cocked my brows at Avery for her to take the lead on how she wanted us to respond to that question.

“A little. We went to high school together,” she replied diplomatically. The wounded look that momentarily flashed in her eyes told an entirely different story—the story where I played the villain.

But Tammy didn’t seem to pick up on it. “Well, isn’t it a small world?” she mused.

“Yeah,” Avery and I said in unison.

Tammy smiled at me. “I was just about to sing all of Avery’s praises to you, but since you know her, I don’t need to waste my breath, right?”

“Well, then. I’ll leave you two alone to catch up, and for Avery to show you the ropes.”

Oh it was Tamar. Shit, I needed to remember that. “Yeah, thanks, Tamar.”

Tamar started out of the door and then stopped. She threw a grin over her shoulder. “Now, Avery, just because you know Cade, you can’t go easy on him. He has a debt to pay to Georgia Tech’s athletic department.”

Avery glared at me before flashing a fake smile at Tamar. “Oh, I promise to make him earn his keep.”

Apparently Tamar wasn’t picking up on the heavy tension between us. “Unfuckingbeliveable,” I muttered under my breath.

I held up my hands. “Nothing.”

Avery crossed her arms over her chest. “I never thought I’d have to see you again.” She shook her head at me, which caused her ponytail to swish back and forth like a whip. “Yet here you are standing before me. I guess, I must’ve done something epic to piss the universe off this much to put you back in my path.”

Whoa, that was sure as hell not what I was expecting. “I could say the same.”

Her green eyes narrowed to fury-filled slits. “Excuse me? You have some nerve to stand here in front of me and say that considering what you did.”

She was right. Only an epic tool would not immediately apologize for what I did to her. It should have been the first words out of my mouth. And not just to make things run smoothly here at The Ark, but because it was the right thing to do. After all, she had truly been an innocent in the whole fucked up situation of me being an emotionally crippled bastard. I’d let her be tortured by a psychotic chick who thought she belonged to me. I’d humiliated her with my deceptive words and cruel actions. But the greatest of my crimes was I had broken her heart.

But in this instance, I was being King Epic Tool because I couldn’t get those words to come out of my mouth. It wasn’t something I struggled with today. I’d had three years to stay those two words. Hell, I’d started off a hundred texts, but I’d never sent them. I’d even done a few stalkerish drives by her house to say how sorry I was in person, but being an emotional pansy ass, I had never gotten out of the car.

So instead of taking the emotional high road, I went slumming. “It’s been three years, Prescott. You really need to get over that.”

Katie Ashley is the New York Times, USA Today, and Amazon Best-Selling author of The Proposition Series, Runaway Train Series, as well as several New Adult and Young Adult titles. Her latest series, Vicious Cycle, has been picked up for publication by Penguin Books.

She lives outside of Atlanta, Georgia with her two very spoiled dogs. She has a slight obsession with Pinterest, The Golden Girls, Harry Potter, Shakespeare, Supernatural, Sons of Anarchy, Downton Abbey, Designing Women, and Scooby-Doo.