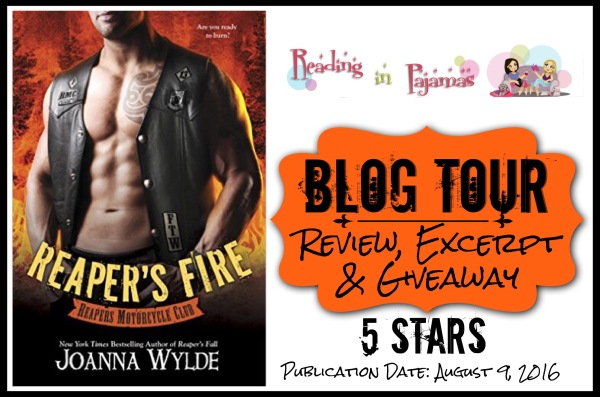 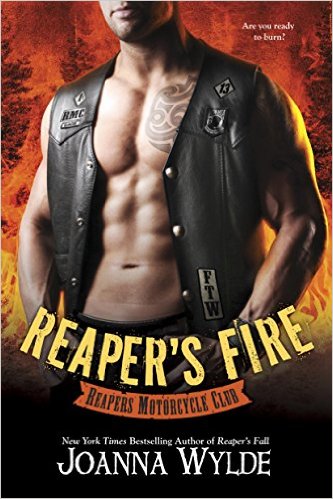 New York Times bestselling author Joanna Wylde returns to the “wild and raw”* world of the Reapers MC with the story of Gage and Tinker…
The club comes first.

I’ve lived by those words my whole life—assumed I’d die by them, too, and I never had a problem with that. My Reaper brothers took my back and I took theirs and it was enough. Then I met her. Tinker Garrett. She’s beautiful, she’s loyal, and she works so damned hard it scares me sometimes . . . She deserves a good man—one better than me. I can’t take her yet because the club still needs me. There’s another woman, another job, another fight just ahead.

Now she’ll learn I’ve been lying to her all along. None of it’s real. Not my name, not my job, not even the clothes I wear. She thinks I’m nice. She pretends we’re just friends, that I’ve still got a soul . . . Mine’s been dead for years. Now I’m on fire for this woman, and a man can only burn for so long before he destroys everything around him.

I’m coming for you, Tinker.

“I can’t believe how late it is,” Tinker said, yawning, and I realized the movie had ended. Now she stretched upward, the blanket falling to her waist as her boobs pushed forward.
God, how much should a man be expected to take?
I should’ve stayed away from her completely—that’d been the plan—but something had snapped when I’d seen her out in the courtyard. Couldn’t remember the last time I’d met a woman like Tinker. She was smart and sexy and funny, and she worked damned hard to take care of her family and business. Sure, I wanted to fuck her—you’d have to be gay not to—but I respected her, too.
“I should probably get going,” she said, offering me a smile so sweet I wanted to bite her lips. “I like to check on Dad before going to sleep, and I’ve got to be up early in the morning. I’ve got to package orders for the courier tomorrow—if they aren’t ready by two p.m., I’m screwed.”
I considered rolling over on top of her. Pushing her down into the couch cushions, shoving my leg between hers, and showing her what a real man feels like.
“Cooper?” she asked, looking confused. I blinked a couple times, forcing myself to focus on her face.
“I’m going to watch another one,” I told her, because I’m a goddamn masochist. “You sure you’re ready to head out?”
She frowned, and I could almost read her thoughts. Yes, she should leave. But she wanted me as much as I wanted her. And yeah, I realize that makes me sound like an egotistical ass, but this wasn’t my first rodeo. I saw the lust in her eyes, and the way she licked her lips and stared at my mouth. This wasn’t a one-way street, not even close.
“I guess I could stay a little longer,” she whispered. Christ, she was so sweet and soft. I wanted to bite her even more now. Suck that pouty lower lip into my mouth and shove a finger up her ass.
Break her.
You’re one sick fuck.
Why yes. Yes, I am. Thanks for noticing.
I managed to control the urge, catching her hand instead, giving it a friendly squeeze like some kind of pathetic tool. Her fingers tightened on mine, then she pulled away and snuggled back down under the blanket, raising her feet to rest on the coffee table. I grabbed the remote and clicked through the menu.
Tomorrow I’d do my job. I’d fuck Talia and spy on Marsh and look for any kind of weakness that might end this situation, the faster the better. Tonight, though . . . Tonight I’d pretend this wasn’t a waste of time.
Goddamn, but my dick hurt.
The next hour was torture.
Tinker sat next to me, all cute and classy and absolutely refusing to make any kind of eye contact. I don’t know how she felt, but to me the sexual tension hanging in the air was thick and heavy. I kept thinking about her hand in mine—small, but strong. The hand of someone who knew how to work hard. So far as I knew, Talia had never held down a job, let alone supported herself.
The couch shifted, and I glanced over to find Tinker sliding deeper into the cushions, drawing the blanket up to her chin. Our legs were maybe six inches apart. She shifted again, and then her hand bumped mine under the blanket. She jerked it back quickly, and I caught the hint of a flush on her cheeks. That was another thing I liked about her—her skin was so pale that I could see every hint of arousal.
Grabbing her hand, I pulled it over to rest on my thigh. This was a really bad idea, so I pointedly refused to think it through. Her hand tensed at first, then relaxed into my strength. My cock swelled against the fabric of my jeans, just inches from her fingers—it’d be so easy to push her hand toward it, wrap it around my painfully swollen dick, and just go to town.
Tinker’s fingers gave a quick squeeze—almost more of a spasm—and I bit back a groan.
Yeah, okay. Really, really bad idea. I should get off the couch and shut this shit down right now, because I couldn’t afford to blow things with Talia just yet. Instead I found myself leaning toward Tinker, bumping shoulders.
God.
I’d grown a pussy. No other explanation, because I couldn’t figure out why the hell else an adult man would sit holding hands under a damned blanket like a kid.

I loved this book! I love this entire series, but I think this one is one of my favorites. I not only loved Gage, I loved Tinker too. Tinker and her friends were so much fun and Tinker herself was someone I would want to be friends with. I was rooting for her throughout the whole book. I wanted sit on her front porch with her and watch Gage mow the yard shirtless and drink wine. Joanna Wylde creates characters that feel so real that the reader feels like they’re in the story too. Reaper’s Fire was an exciting, emotional and sexy read that kept me flipping the pages from start to finish. Each book can be read as a standalone, but I recommend you start at the beginning to fully enjoy the series and characters. I highly recommend the entire series. Joanna Wylde delivers hot bad boys in beautiful love stories. Reaper’s Fire is going on my Top Favorites of 2016 list. 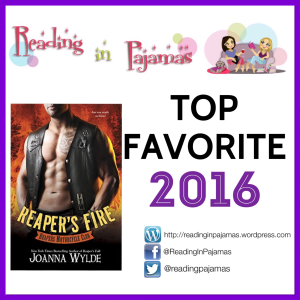 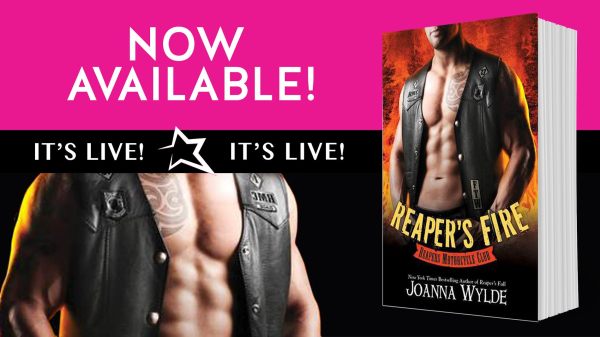 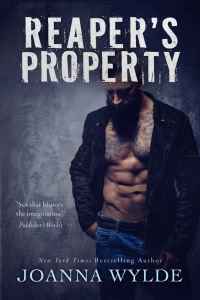 Have you heard?
Reaper’s Property by Joanna Wylde has a NEW COVER!

Meet Horse & Marie for ONLY $3.99 (normally $7.99)
Author’s Note: This book was originally released through a small publisher in 2013. This independent edition has been lightly edited, and contains a bonus short, “Sticky Sweet” (originally published on the author’s website) and a Q&A with the author.

Joanna Wylde is a New York Times bestselling author and creator of the Reapers Motorcycle Club series. She currently lives in Idaho.