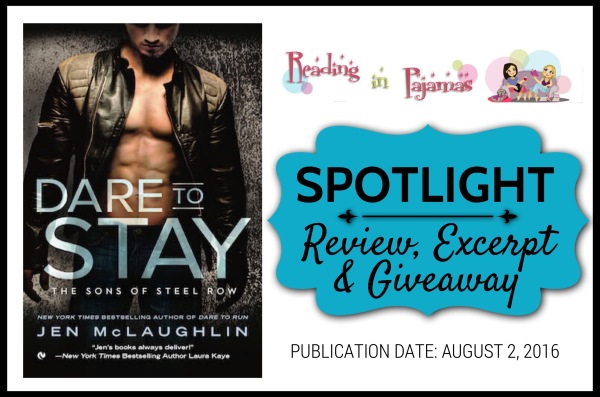 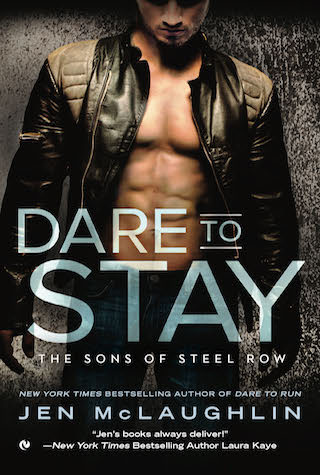 Fans of Katie Ashley, Joanna Wylde, Kristen Ashley, Sophie Jackson and Katee Robert will be thrilled by this dark, steamy series, from the New York Times bestselling author of the Out of Line novels, where one gang of criminals knows just how being bad can be so good…

Bruised and bloodied on Boston’s mean streets, Chris O’Brien is reeling from the loss of his childhood best friend. But after barely escaping a hit placed on his head, Chris is desperate to live. A safe haven comes to mind – the home of the perfect girl from his childhood, Molly Lachlan. Before he has fully considered what it would mean to involve her in his mess, he finds himself on her doorstep.

When Molly agrees to let Chris inside her home, she realizes she’s also letting him into her life. Danger and desperation are coming off him like steam, and yet she can’t bring herself to turn him away. His bad boy charm always had a hold on her, but now there’s a soulfulness and sorrow in him that she’s never seen before. And despite the heart-stopping risk of helping him, she hopes against all reason that he’ll stay…

The stakes are dangerously high…and the passion is seriously intense. Follow the exploits of the Sons of Steel Row in Dare To Run and Dare To Stay. 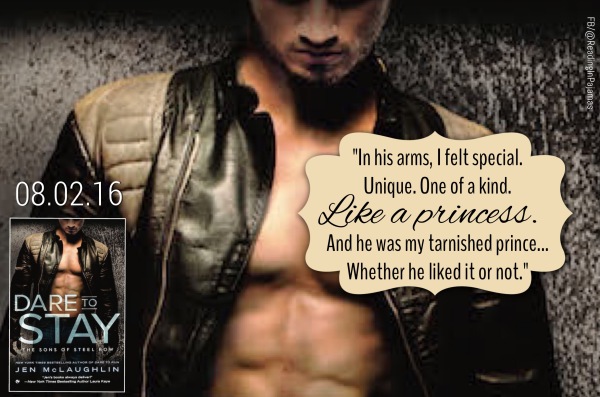 “Good.” I pointed at the crates. “Now, wipe the blood off your face and get the rest of these unloaded. And make sure you clean up after yourself. We don’t need a blood trail.” I threw a scathing glance at the rest of the crew, who’d done nothing but watch. “That goes for all of you.”

They all jumped into motion like obedient worker ants, including Doug. No one spoke, but they exchanged silent glances as they moved the crates out of the container and into the truck that would carry the goods to the old ware- house outside Steel Row where we stored our inventory. I’d busted their buddy’s nose, but in this world? That earned you respect.

They wouldn’t mess with me again.

Chris, my best friend and another lieutenant, came over to me, crossing his arms as he got closer. He watched me with an appreciative light in his brown eyes. Chris was the one exception to my no-trust rule. He’d gotten me into this world, against all odds, and had been there for me when I’d needed him most. “You handled that well.”

It was sick that beating some dude up was a way to earn praise in my career field, but it was what it was. This life was the only life I ever would know. And that was ne by me. “He deserved it for being a dick.”

“That’s because none of these guys take you seriously.” Chris lowered his head, his brown hair hiding his eyes from me, and studied his nails. His green T-shirt pulled at his muscular arms, and his ink spread all the way down to his wrist. He’d been in the gang since he’d been a teen, like me. He’d joined because his pa had been a member, so this life had been carved out for him from the moment he came into this world.

Those weren’t my reasons for joining.

Hell, I wouldn’t know my father if I passed him on the street. When my mother was alive, God rest her soul, I’d doubted if she’d even known who he was, either.

“Yeah, well, that’s their mistake.” I straightened my sleeves. “Not mine.”

He looked over at the crew, who definitely had a new sense of urgency in their movements. “Maybe because you’ve been in lockup the past two years. They didn’t know who you were, besides the fact that you got put away for assault, and now you’re here, bossing them around on the docks.”

Chris and I had always been tight. When I’d been doing time, he’d come to visit me twice a month. Kept me posted on the happenings in the real world. He’d visited more than my actual brother had, but that was no surprise. I’d always looked out for Scotty, but Scotty wasn’t exactly the sentimental type of guy who put a priority on family visits. And that was fine, too. “I hadn’t been planning on being here at all. This isn’t my department. I came because of the damn ATF. And Scotty has some chick on the line.”

“Since when do you care what Scotty wants when it comes to this shit?”

I shrugged. “Since I spent some time behind bars . . . Scotty and I aren’t as close as we once were. But that doesn’t mean I’m going to let him play chicken with the feds. He’s too damn cocky for his own good.”

“So he’s off fucking some girl while you stick your neck out for him? Like usual?” Chris rolled his eyes.

I moved my shoulders, wanting nothing more than to get the hell out of here. They were almost finished, so I’d be free any minute now. Free. Funny choice of words. I’d never be free. Not really. The closest I got to free was when I walked down the Freedom Trail. “Yeah. Basically.”

“You’ve got to stop treating him like a kid. He’s twenty- four now.” Chris looked at me, studying me too close. Chris was the only one who caught glimpses of the real me. “He’s not the little boy you need to protect anymore. He can take care of himself. A little too well, maybe.”

“What’s that supposed to mean?” I asked.

“Nothing, man. Nothing at all.” He shuffled his feet and stared at the guys as they did a final check of the shipping container. “I heard you almost got taken down inside. What happened?”

I shrugged. “Someone jumped me from behind on the way out of lunch. I fought him off long enough to keep my life, but I didn’t get a clear look at his face before the guards dragged him away. A buddy on the inside said he looked like a new guy but couldn’t point him out. It all happened too fast.”

Chris rocked back on his heels. “You suspect something, don’t you?”

“Don’t you?” I looked at Chris. “You can’t bullshit a bullshitter. I see it in your eyes. You know something’s up.” “Maybe I do. Maybe I don’t. But a smart man never talks.” Chris dropped his hands at his sides and whistled through his teeth. As he walked away, he said over his shoulder, “Not in this world.”
“Not even for his blood brother?”

Chris paused, his broad shoulders tight. “Not even then.”

“Glad to see you haven’t forgotten me, brother,” I said, pressing my fingers over the old scar in my palm. One of the two Chris and I had made all those years ago on the railroad tracks behind my home. Ma had been pissed at me for deliberately cutting myself. If it’d gotten infected, it would have meant medical bills we couldn’t afford. I’d gone to bed without dinner that night. “Have a good night.”

Chris spun on his heel and came back, his cheeks red and rage in his eyes. “You know nothing. Nothing. You weren’t here, asshole. You were gone, and the whole thing went to shit. You left me to fend for myself in the damn Sons of Steel Row all by myself.”

I cocked a brow. “Excuse me for getting arrested.”

“Ha-ha, so funny, fuckwad.” Chris clenched his fists. “You want me to tell you what I think? You want it that bad?”

I forced myself to shrug. “If you feel so inclined, sure.”

“I think someone is putting all his players into motion, and it all started the second we got word that you got parole.” Chris looked me up and down, his nostrils flaring. “And I suggest, brother, that you watch your back.”

I held my hands out at my sides, forcing a carefree grin . . . even though I felt like anything but. “I always do. It would take a ghost to sneak up on me.”

Chris shook his head. “Don’t be so damn cocky. It just might just be your downfall.”

“Whatever, man,” Chris said, locking eyes with me. “Whatever.”

As he walked away, I dropped the grin and fisted my hands. “Thanks.”

Chris didn’t say anything. Just walked up to the newly loaded truck, the men in either the cab or their own vehicles. He tapped the back of the truck to signify that all was well, and the truck took off. Chris followed behind it in his car, the others falling in line behind him. He’d make sure everything got to the warehouse, unpacked, and inventoried. I stared at the convoy as it disappeared from sight, then turned around and left, making sure to keep my steps whistled “The Star-Spangled Banner.”

No matter what I did, I couldn’t show my certainty that Chris was right. I’d been thinking the same thing, so hearing it straight from the mouth of the only man I trusted in this world? Yeah, that pretty much answered my unasked questions. It seemed clear as day that this was an inside job, and that meant . . .

Someone in Steel Row wanted me dead. 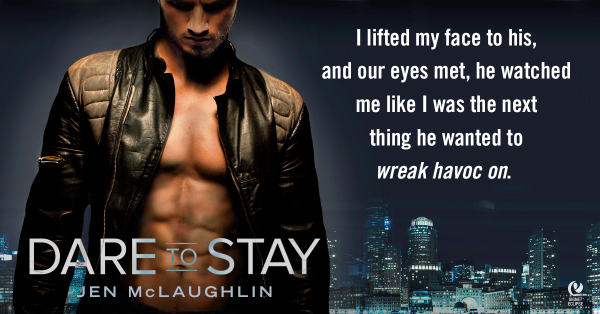 I loved DARE TO STAY even more than I loved DARE TO RUN! I started picked up the first book in this series because of the cover alone. The covers are that hot. The books live up to the covers though. This series delivers the hot romance. DARE TO STAY is the second book in Jen McLaughlin’s Sons of Steel Row series and can be read as a standalone but I recommend reading the first book before picking up this one if you want the complete storyline. DARE TO STAY is Chris and Molly’s book and they are perfect for each other. I love the bad boy/ villain heroes matched up with good girls. Their chemistry was off the charts. I fell in love with Chris! He’s this tortured bad boy hero and the more I read about him the more I wanted to be Molly in this book. Isn’t that what we all want in a romance book? This series is on my “must have immediately and devour” list and I’ll be waiting impatiently for the next book. I highly recommend this series for romance lovers who love a bad boy hero. 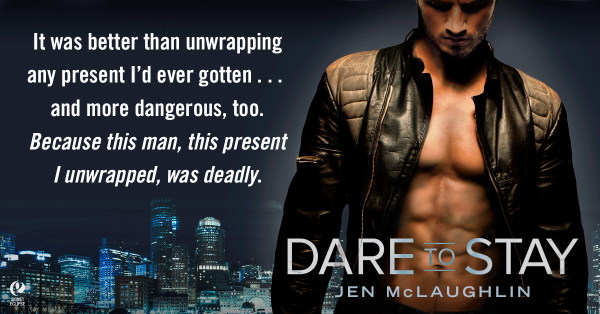 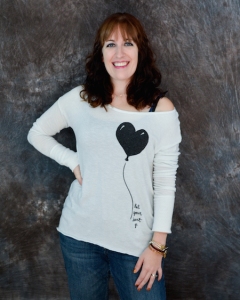 Jen McLaughlin is the New York Times and USA TODAY bestselling author of sexy books with Penguin Random House. Under her pen name, Diane Alberts, she is also a USA TODAY bestselling author of Contemporary Romance with Entangled Publishing. Her first release as Jen McLaughlin, Out of Line, hit the New York Times, USA TODAY and Wall Street Journal lists. She was mentioned in Forbes alongside E. L. James as one of the breakout independent authors to dominate the bestselling lists. She is represented by Louise Fury at The Bent Agency.