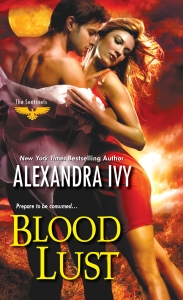 Blessed and cursed by their hidden abilities, the Sentinels have no choice but to live, and love, on the edge of humanity…

The Sentinel assassin, Bas, is facing the greatest challenge of his outcast existence. His young daughter, Molly, has been kidnapped. But her disappearance has brought the return of her mother, Myst, whom Bas has never forgotten–or forgiven.

Haunted by a vision that she’s destined to create a weapon that will destroy thousands, Myst was never impulsive–until she met the irresistibly handsome Bas. But with the Brotherhood, the enemy of the high-bloods hunting for her, Myst had to stay on the run, to keep her child, and the world, safe. Now, with the most important thing in both their lives at stake, she and Bas must embark on a treacherous journey to save Molly, to confront the truth of Myst’s fate–and to face their fierce desire for one another.

Alexandra Ivy is one of my favorite paranormal romance authors for a reason. She delivers exciting and hot paranormal romances. I love her Sentinels series! Blood Lust is the third book in the series and this new addition is full of action, danger, and steamy romance. Alexandra Ivy created an exciting and seductive new world that drew me in and took me along on an adventure with the characters. I loved Bas and Myst together and their daughter Molly was just adorable and stole the spotlight. I’m addicted to this series and have it on my must buy list. I can not wait to see what else Alexandra Ivy has in store for us in this series. Each book in this series is a standalone but I recommend you start at the beginning. Paranormal romance lovers will love this series.

“You didn’t tell me you were a telepath.”

She shrugged. “You didn’t ask.”

“You applied for a job. I assumed you would have shared your complete resume.” He leaned down, wrapping her in the scent of clean male skin and scotch. “Or were you keeping secrets even back then?”

His lips brushed the top of her ear, sending streaks of lightning through her body.

Danger, excitement, and pure lust twisted her stomach into a knot.

Dammit. She’d spent the past four years isolated in the bowels of a Russian monastery. She wasn’t prepared to deal with the cascade of sensations.

She struggled to suck air into her lungs. “I wasn’t a telepath when I applied for the job,” she said in hoarse tones.

He frowned, his fingers resuming their absent path up and down her arm. Was he even aware of what he was doing?

Her skin shivered with delight.

“Is that supposed to be a joke?” he demanded.

She grimaced, understanding his annoyance. High-bloods were born with their mutations, even if some didn’t reveal themselves until after puberty. Most people only had one, but a rare few could claim a combination.

Like Bas, who’d been born with both the magic of a witch and the superior strength of a Sentinel. And even more rare were those powers that appeared later in life, seemingly out of nowhere.

None of the healers had an explanation.

“The talent didn’t reveal itself until I was pregnant,” she grudgingly confessed.

He lifted his head, genuine amazement in his eyes. “A spontaneous manifestation?”

“Yes.”
He studied her with a searing intensity. “Fine. You should have told me you were in contact with Molly.”

She forced herself to hold that raptor gaze. Bas was a natural leader with a male confidence that easily intimidated others.

He would run her over completely if she didn’t try to stand her ground.

“I know that—” she started to snap, only to bite her tongue. Well, hell.

She grimaced. It was true he was an arrogant ass, but he’d taken in a baby that he hadn’t known existed, without question and without hesitation, and surrounded her with the sort of love every little girl deserved.

As much as it might pain her to stroke his bloated ego, she owed him her eternal gratitude.

“I’m truly appreciative that you’ve done such a wonderful job with Molly.” She managed to force the words past her stiff lips. “She’s a very special little girl and I know that you had a very large part in that.”

He blinked, a flare of color staining the sharp line of his cheekbones.

Had she managed to knock him off guard?

Then his lips abruptly thinned. “You’re very good at deflecting my questions,” he accused.

She dropped her gaze to his thousand-dollar Italian shoes. “Then stop asking them.”

“Myst.” His finger curled beneath her chin, tilting her head up. “Why didn’t you let me know you were in contact with my daughter?”

A fresh pain sliced through her heart. “Our daughter,” she corrected in fierce tones.
His lips parted, but before he could deny her right to be a mother, Molly’s plaintive voice interrupted their tense confrontation.

“Daddy, I want Mommy to tell the story.”

Myst glanced toward the tiny girl who was perched on the edge of the bed before returning her wary gaze to the predator who was nearly vibrating with the urge to toss her through the nearest window.

Frustration tightened his stark features, but dropping his hands, he forced himself to take a step back.

“Tell her the story. Then we talk,” he warned, turning his head to send his daughter a smile that held uncomplicated affection. “Good night, pet.”

Bas stalked from the room, his phone pressed to his ear as he reached the main room of the suite.

“Kaede,” he snapped as soon as his enforcer picked up. “I need you in Kansas City. I’ll explain when you get here.”

He shoved the phone back into his pocket and paced to the bank of windows that overlooked the Kansas City skyline.

After five years of paying a fortune to trackers, witches, and even a human private investigator to hunt down Myst, she waltzes into his penthouse as if she had every right to be there.

Worse, he discovered that she’d been in constant contact with Molly.

A short, humorless laugh was wrenched from his throat.

No, that wasn’t the worst.

The worst was the undeniable fact that he found her just as damned exquisite as the first time she’d sashayed that tiny body into his office.

His fingers had twitched with the urge to run through the moonlit silk of her hair. To yank off her pretty sundress and explore the pale ivory skin that had haunted his dreams. To crush the soft curve of her lips until they parted in help-less surrender.

Emotions are the enemy.

He’d been taught that by the monks who’d honed him into the perfect killer.

But Myst managed to shatter a lifetime of training, stir-ring his passions with an ease that was frankly terrifying.

He needed her gone. 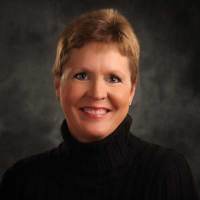 ALEXANDRA IVY graduated from Truman University with a degree in theatre before deciding she preferred to bring her characters to life on paper rather than stage. She currently lives in Missouri with her extraordinarily patient husband and teenage sons. To stay updated on Alexandra’s Guardian series or to chat with other readers, please visit her website at http://www.alexandraivy.com.