An Enchanted Spring (Mists of Fate #2) by Nancy Scanlon 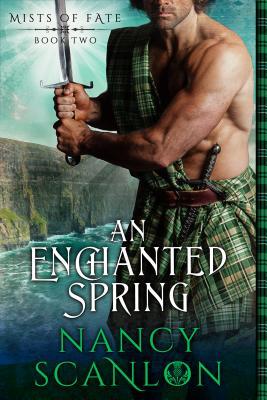 Nancy Scanlon continues the timebending saga she began with The Winter Laird, pulling heroes and villains alike through the portals of time to help save their futures and find their truest loves.

A time travel accident has left Aidan MacWilliam, younger brother of a medieval Irish laird, trapped in the future. Though he’s become a successful entrepreneur in the twenty-first century, Aidan still can’t banish thoughts of the world he left behind. In search of distraction, he heads to New York to scout a PR person for his cousin’s matchmaking firm, Celtic Connections.

Emmaline Perkins might be the perfect candidate. A PR expert and closet medievalist, Emma has always put work before her social life. When a breathtakingly handsome man who looks like he stepped straight out of the Middle Ages proposes business, she struggles to keep her professional and personal lives separate.

Then Emma’s ex-fiancé resurfaces, threatening Emma’s livelihood, her home, and ultimately her safety. Aidan jumps to protect her and not just because she’s good for business. He feels a primal need to defend the alluring young woman. But the question is not where she’ll be safe, but when.

He stopped directly in front of her, his body inches from hers, and slowly leaned in. Emma’s breath hitched, and her body went on full alert, her senses hyperaware of him. His clean scent filled her nose, and his nearness made her knees turn to jelly. When her eyes locked on his clean-shaven face, it took every fiber of her being not to rise up on her toes and run her tongue along his jawline.
His eyes met hers, and she saw it—raw hunger. As he raised his hand slowly, she parted her lips, hoping for a second taste of Aidan MacWilliam.
The sound of something rustling above her head forced her to look up.
Aidan brought a bag of coffee down to the counter and trapped her between his arms.
She couldn’t move. She didn’t want to move.
They stood like that for a long moment before he shook his head a little, as if questioning his sanity, before he placed his hand on her jaw, tugged it open, and melded his firm lips to hers. Her eyes fluttered closed of their own accord, and she was suddenly enveloped in his arms, his hand stroking her neck. He cradled her head and flicked his tongue to hers. She wrapped her arms around his shoulders and brought them up to his neck, as he kissed her gently, carefully, as though she would break.
She sighed softly and leaned into him, and he growled into her mouth. Aidan kept one hand in her hair, his fingers gentle, and pressed his other hand into the small of her back, bringing her body flush with his. He deepened the kiss, devouring her in the best of ways. Emma felt cherished, branded, and hot all over.
She pressed into him harder, and he slid his hand up her spine, sending chills throughout her overheated body. She ran her fingers through his hair, surprised at its softness. He drew her attention away from wandering thoughts, though, when, without breaking the kiss, he grasped her waist and lifted her onto the counter. He angled her head and kissed her as though his life depended on it.
She lost all coherent thought.
His hands were on her back, her shoulders, her hair, her legs. She dragged her hands up his abs, feeling the ridges of muscles and flesh; she wanted to tear his shirt off and kiss him everywhere, all at once.
“Ahem.”
Dimly, she registered that someone was standing on the other side of the island, and she tried to disengage from Aidan.
“Kitchen’s closed,” Aidan said, his voice rough. He rested his forehead against Emma’s.
“Let me know when it’s open, all right? I need some coffee before I start working,” Colin replied, the grin in his voice unmistakable. A few seconds later, a door opened and closed.
They looked at each other for a moment, breathing hard, and didn’t say anything. Aidan flicked his gaze to her lips, and kissed her hard and deep before pulling away. “I won’t apologize for that.”
More confused than ever, she glared at him. “I don’t know whether to slap you or…or…”
His green gaze locked on her for another moment, and he let out a sudden chuckle. “Christ, Emma, what you reduce me to. Kissing you in my cousin’s kitchen.”
“That felt more like ravishing,” she snapped before she could stop herself. She slid off the counter.
He brought his body against hers once more, and she cursed herself for freezing in place. He leaned down, his mouth on her ear, and ran his tongue along it. “Then you’ve never been properly ravished,” he whispered.

(Five Print Copies of AN ENCHANTED SPRING (U.S. Only)) 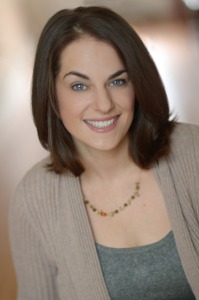 Born and raised near Boston, Massachusetts, Nancy Scanlon wrote her first romance novel at age 16, when she realized that fictional boyfriends were much easier to figure out than real ones. In the time since, she managed to earn a degree in English, obtain a graduate certificate in creative writing from the University of Cambridge, and marry the man of her dreams (but she still holds tight to her fictional boyfriends).

Currently, she resides in Puerto Rico with her husband, two children, and two dogs. When not writing, Nancy spends her time reading, reviewing and blogging about romance novels, watching too much HGTV, and taking care of her family.

One thought on “Blog Tour, Excerpt & Giveaway: An Enchanted Spring (Mists of Fate #2) by Nancy Scanlon”