Born of Betrayal (The League Series) by Sherrilyn Kenyon

Fain Hauk to give up everything he loved: His military career. His planet. His fiancée. Even his name.
Now decades later, everything has changed. He’s built a new life out of the ashes of his old, and he’s vowed to never let anything threaten his loved ones again.

But when old enemies align themselves with new ones, he’s caught in the middle of a brutal war. And when fate throws his former fiancée back into his world and she has her own agenda that includes taking his head for what he did to her years ago, more than just his life is at stake. The fate of the Ichidian universe and that of his brothers-in-arms hangs in the balance. Winner take all.

It’s kill or be killed, and never has the battle been more fierce…

I loved this book so much! Fain and Galene’s story was decades in the making and when they reconnect it’s explosive. Their story is full of action, danger, emotion, heartache and romance. Sherrilyn Kenyon writes in a way that describes every detail. The reader experiences the world of The League Series and you take the journey with her characters. I’ve received some comments from other Dark-Hunter fans about their reluctance to try the League series because of the space setting so I wanted to let everyone know that if you love Sherrilyn Kenyon’s Dark-Hunter Series you will love The League Series too. It’s not really about the setting for me. It’s about Kenyon’s writing style, her characters and their stories. They’re just epic and I love them all! If you’re new to the series I would recommend you start at the beginning to fully enjoy it. Each book has a HEA ending for different couples, but the series needs to be read in order to fully appreciate the characters and series storyline. I can’t wait for the next book!

*Review copy provided by St. Martin’s Press in exchange for an honest review.

“Fain savored that look and the feeling of her holding him. Of having her in his life. Forever. “Thank you.”
“For what?”
“Bringing me home after I’d lost my way and forgot where it was.”
“You don’t have to thank me, Fain. I was out in the cold, too. Every bit as lost in the dark. And sadly, I didn’t even know it. I thought I was all right alone. That I was happy and fine. But the truth is, every ship needs a hangar. And every heart needs a haven. You are that light that saves me from the darkness, and I don’t want to dwell there ever again.”
Cupping her cheek, he placed a gentle kiss on her lips. “My oath to you, Galene Hauk, you never will. For wherever you go, I will always follow. To hell and back. Forever and beyond.”

✦Join me on the #KenyonReReads & re-live or discover the best moments of the Dark Hunter series! 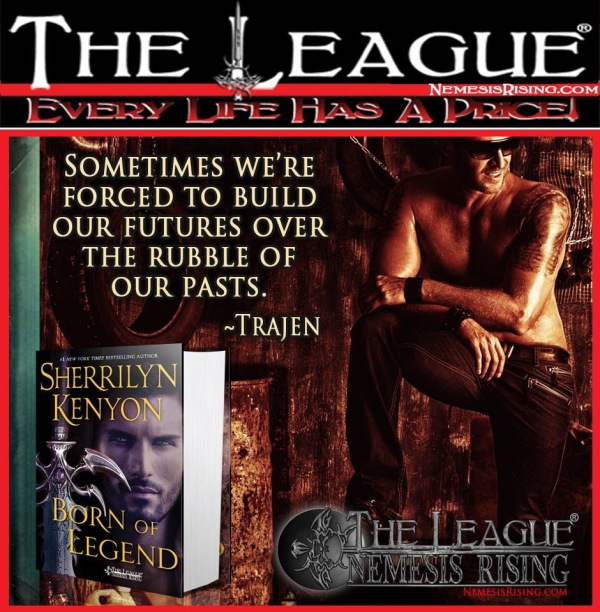 Paperback Copy of Born of Night (The League, Book 1) by Sherrilyn Kenyon

*Winner will be announced Saturday (12/19) by 5PM CST. Reading in Pajamas is responsible for this giveaway.