Doing it for Love (All About Love) by Cassie Mae 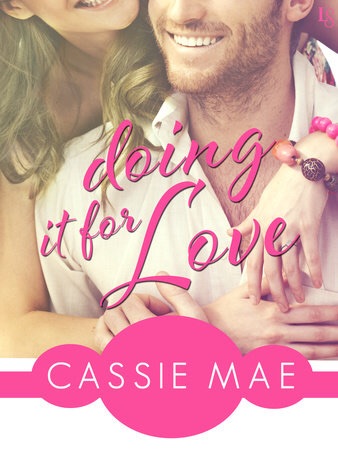 Cassie Mae’s charming, sexy new novel, perfect for fans of Emma Chase, puts a steamy twist on modern love as one bride-to-be tries to put the spark back in the bedroom—by any means necessary.

Elizabeth Fanning’s life looks pretty perfect, judging by the diamond ring on her finger. Her fiancé, Landon, is sweet, handsome, and hilarious. The trouble is, before they’ve even tied the knot, their sex life has gone from mind-blowing to “meh”—and Liz isn’t ready to be part of an old married couple. After a cathartic call to her best friend, Liz comes up with a brilliant idea. She and Landon may never be able to re-create the magic of their first time, but how amazing would their wedding night be if everything below the neck was off-limits until then?

Liz thinks it’ll bring them closer together. Landon’s convinced she’ll cave first. So they raise the stakes: Whoever lasts longer gets to pick their honeymoon destination. With her heart set on the Bahamas and Landon fighting for snowbound Utah, Liz simply has to win. But pretty soon, her body is screaming for attention, and Landon’s never seemed so far away. Has Liz’s experiment backfired? Losing their little competition would be frustrating—but the one thing she can’t afford to lose is him.

I chuck the negative test in the bathroom trash with a shimmy and a shake. Pregnant at twenty-two was not what I pictured when I did my aptitude test seven years ago. Those results said I’d be some sort of performance artist. I pictured myself famous, in all the Broadway plays, living in my penthouse suite with my best friend, Theresa, and having weekend nookies with Chase Crawford. Kids were on the bucket list under: hell yes . . . when I’m married. Obviously, I was a dreamer at fifteen. Now that I’m more a realist, I’ve learned to be happy with whatever life has to offer me.

But I am happy that it decided not to offer me a baby right now.

I start the water on the shower because I feel like I peed all over myself when I attempted to aim on the stick. Aunt Flo is fourteen days late, and I’ve been avoiding Landon and his semen. Not that he’s noticed.

If sex was a three-course meal, Landon and I would be the peas and carrots. We’re good together, but we’re still the vegetables. Basically we do it when there’s a commercial on, when there is no food in the fridge, or it’s someone’s birthday. It’s okay . . . that’s what happens when you move past the honeymoon stage.

We used to be strawberries and whipped cream. Luxurious dessert, grinding on each other on public dance floors, car sex, kitchen sex, against the wall sex, balcony sex—which was an epic fail, by the way—and the always disastrous shower sex. Disaster because our bathtub is made for one person only, and so lying down ended with a faucet to the butthole and standing up made for slippery recoveries. But we were strawberries and whipped cream, so we’d laugh it off, not let it break the mood, jump into bed, and keep at it.

I refuse to think we’ve become raisin bran—the sex you have only because you have needs to take care of—despite what Theresa says. She’s permanently the palate cleanser between courses in her own sex life, and she’s not budging anytime soon. But she just hasn’t found her Landon yet.

Anyway, back to Landon not noticing the lack of sex. It’s because we’re so busy all the time. He works all day at a call center then he goes and films all night. He’s a director-in-training—got an award for his last movie and a grant to make the one he’s working on now. So he comes home smelling like sweaty socks—which he loves to leave on the floor in the living room. That’s what peas and carrots do, though.

It’s funny, for so long I wanted to know the story after the happy ending. What happens to the couple once they find each other, consummate their relationship, and get past their demons? Now that I’m in that story, I get why no one talks about it. I’m in love, so it pretty much trumps all the other crap. At least, it has so far. Despite Landon’s dirty laundry—literal—and his late nights—also literal—he makes me laugh. I’ve never had so much fun with another person. Even being vegetables, sex—when we have it—is fun.

Probably why I wish we had it more.

Better check the effectiveness of my birth control first, though.

A hand whips back the shower curtain, and I scream like a banshee and chuck my washcloth at the attacker.

“Sweet mother,” I say, holding my heart. “What the hell?”

Landon slowly peels the washcloth from the bill of his The Nightmare Before Christmas hat. He’s wearing his matching graphic tee, a red stain on the upper right sleeve. Probably from the pizza he had to gobble between his job and his shoot this afternoon.
“Liz,” he says, holding the pregnancy test between two fingers. “What is this?”

“Did you think you were pregnant?” He chokes on the word.

He lets out this large breath, chucking the test back in the trash. “Fine, but you must promise on your precious iPod that you will tell me next time you think you are.”

I hold my hand to the square. “I vow to dispose of all my late-period secrets.” I drop my arm. “Now may I shower?”

“How long you going to be?”

“So till the hot water is out.”

I put a finger to my nose, and he pulls his cap off. His shirt goes next.

“Joining me?” I ask, my lady nethers perking up. It’s not even my birthday. What a sexy surprise.

“Yeah, I won’t have time in the morning.”

“Oh.” Calm down, girls, it’s just one of those “saving water” things, and not because I’m naked, he’s naked, and we’re going to be wet and slippery.

His cold hand splays across my stomach when he steps in, and I refuse to let my nethers get their hopes up again.

“Paint me paranoid,” he says, backing me into his chilled body. I move the water so he warms up. “But I think something’s wrong. And I’m not letting you out of this shower till you tell me.”

A twitch of a smile finds itself on my mouth. “I’m fine.”

I shake my head, biting back my laughter. “You’re a tease.”

He knows why. The last time we showered together, he held me close like this, got me all revved up, then grabbed the soap, washed himself, and left for work. It’s not his fault. I did the same thing the time before that. Again, comes back to being the veggies of the sex meal.

“Okay. The guessing game,” he says when I don’t answer. “I’ll play, but you know I don’t like it.” He gently rocks me. “Your vampire show didn’t record?”

I snort a laugh into the water. “I haven’t checked. But it better have.”

He swipes my hair off my neck, and I feel his smile against my skin. “Hmm . . . the Jets have no shot at making the playoffs. I feel your pain. I cried it all out last night. Now it’s your turn.”

I playfully elbow him in the stomach, but despite my abuse, Landon’s arms tighten around me, thumb reassuringly rubbing my hipbone.

“No . . . I think I know what this is really about.” He pulls at the skin by my bellybutton. 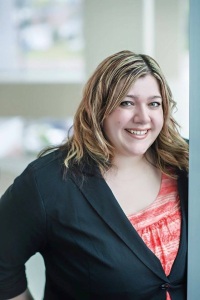 Cassie Mae (who dons the name Becca Ann on occasion) is the author of a few hundred—okay, maybe not that many—books. Since writing her bestselling debut, Reasons I Fell for the Funny Fat Friend, she has published books with Random House, Swoon Romance, and Tulip Romance. She has a favorite of all her babies, but no, she won’t tell you what it is (mainly because it changes depending on the day). Along with writing, Cassie likes to binge-watch Teen Wolf and The Big Bang Theory. She can quote Harry Potter lines quick as a whip. And she likes kissing her hubby, but only if his facial hair is trimmed. She also likes cheesecake to a very obsessive degree.