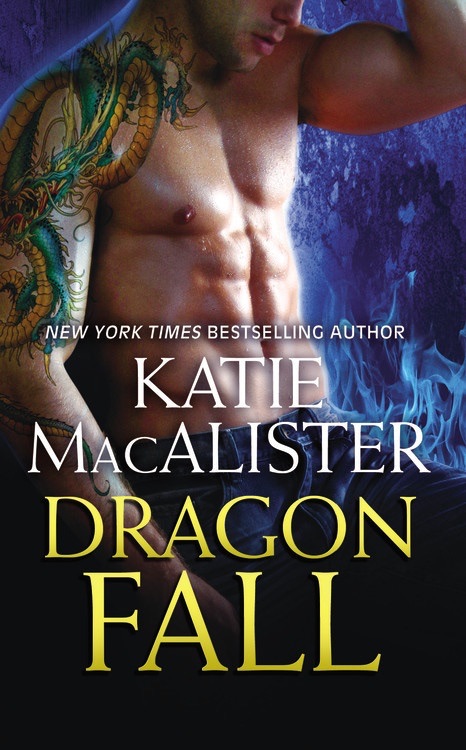 For Aoife Dakar, seeing is believing-and she’s seen some extraordinary things. It’s too bad no one else believes that she witnessed a supernatural murder at an outdoor fair. Returning to the scene for proof, Aoife encounters a wise-cracking demon dog-and a gloriously naked man who can shift into a dragon and kiss like a god. Now thrust into a fantastical world that’s both exhilarating and terrifying, Aoife is about to learn just how hot a dragon’s fire burns.

Kostya has no time for a human woman with endless questions, no matter how gorgeous or tempting she is. He must break the curse that has splintered the dragon clans before more of his kind die. But his powerful attraction to Aoife runs much deeper than the physical-and there may be more to her than even his sharp dragon eyes can see. To survive the coming battle for the fate of his race, he needs a mate of true heart and soul.

This is a fun paranormal romance full of odd characters and crazy situations all thrown together to lay the foundation for this new dragon series. It’s rather light on character development which sadly kept me from becoming invested in Kostya or Aoife. Also, the romance part of the story was a bit lacking so the sudden depth of their feelings seemed a bit odd. Luckily the witty rapid-fire dialogue kept me entertained and wondering what would come out of Aoife’s mouth next. All in all it is a witty light story perfect for a summertime read.

*Review copy provided by Hachette Book Group in exchange for an honest review.

Kostya took my arms in his hands, giving me a little shake. “You appear to be denying the existence of Jim, amongst other things. Is that it? You do not wish to admit that I am a dragon, and Jim is a demon?”

“Oh, now you’re a dragon, are you?” I asked, stifling the urge to laugh hysterically.

“I have always been a dragon.” His tone implied that he was vaguely insulted, but before I could make a comment about his sanity—let alone mine for even having that conversation—the world as I knew it came to an end.

Or rather, the world that I had lived in for the last two years ended. Before my unbelieving eyes, Kostya’s form seemed to shimmer for a moment before morphing into that of a black dragon, complete with glossy black scales, ivory claws, and trickle of smoke coming out of one nostril. I froze, staring, my brain trying to come to terms with the impossible being in front of me, but before I could do more than squawk, the dragon shimmered again and Kostya stood in its place.

That was the moment that my sad little inner voice stood up and shouted with joy, filled with vindication after two years of denial.

“Holy sex me now!” I said, the rest of my brain still having problems coping with the fact that a dragon—a dragon!—had stood before me, his claws on my arms.

Told you so, said the formerly sad inner voice. Guess Terrin was right all along, huh? Now we can get on with life. I wonder what a demon lord does?

And that’s when the penny dropped. “You’re the black dragon I saw at GothFaire that night the world went insane. You’re the guy Terrin pointed out to me.”

“I do not know anyone named Terrin. As for your request—”

“What request?” I asked, confused while my mind was busy pushing bits of puzzle pieces into place. No wonder Kostya looked familiar to me. But that meant that everything Terrin told me was true. Which in turn meant I wasn’t the least bit ga-ga. Relief swamped me when I added, “I didn’t ask you for anything.”

“You did. You asked me to sex you now. I realize that you desire my body,” Kostya said to me in the same stern tone of voice that my father had used whenever I was caught doing something I oughtn’t, “but now is hardly the time or place for such actions. I will admit, however, that the thought is not displeasing to me. You are quite comely. Later, we will have the sexing. But for now, we must remain focused.”

I giggled. I couldn’t help it, the giggle just slipped out.

His frown returned. “You find me amusing?”

“I find your phrasing amusing. Comely, to be exact. I don’t think I’ve ever heard it used outside of a Georgette Heyer novel. And for the record—” I had to stop for a moment to get a grip on myself. Apparently, my brain decided that giggling was good, and there was no reason to cease that action. “For the record, I do not desire your body. Not that you’re hideous or anything, far from it. Even with those scars, your chest is really nice, and I like your legs because they aren’t scrawny, and you have nice shoulders and naughty bits, but I’ve never been one to put physical attributes ahead of more important things.”

“Such as?” He had his hands on his hips when he asked the question, which just made me want to giggle again.A

“Intelligence, a sense of humor, and oh yes, not being a mythical creature.” I swallowed another giggle. “Not that it wasn’t a cool form, but still. I like my men without the sort of baggage that must go with being a shapeshifter.”

“Is that so?” One eyebrow lifted.

“Then you will not like this.” He pulled me against him, his mouth moving into place on mine, his breath hotter than I could have imagined. And then he kissed the very wits right out of my brain.

For as long as she can remember Katie MacAlister has loved reading, and grew up with her nose buried in a book. It wasn’t until many years later that she thought about writing her own books, but once she had a taste of the fun to be had building worlds, tormenting characters, and falling madly in love with all her heroes, she was hooked.

With more than fifty books under her belt, Katie’s novels have been translated into numerous languages, been recorded as audiobooks, received several awards, and are regulars on the New York Times, USA Today, and Publishers Weekly bestseller lists. A self-proclaimed gamer girl, she lives in the Pacific Northwest with her dogs, and frequently can be found hanging around online.